by Gary Key on December 3, 2006 12:05 AM EST
19 Comments | Add A Comment
19 Comments + Add A
Comment
We have already taken a look at upcoming reviews featuring storage, optical, and multimedia products. Today we will present a quick look at some of the motherboard products that we are currently testing and will provide reviews of in the near future. While this is not a complete listing and does not include the long awaited RD600 board from DFI, it should provide a good indication of the products we are excited about. With that said let's take a quick look at some of these product offerings.

The continuing introduction of new chipsets and revisions to previous generation chipsets for the Intel Core 2 Duo processor series has created an enormous amount of product introductions since the end of June. So much so that our labs are literally stacked with motherboards that are in the process of testing and review analysis. Intel currently holds the overall performance crown with the Core 2 Duo and the continued rollout of new motherboards for this impressive processor series is amazing. 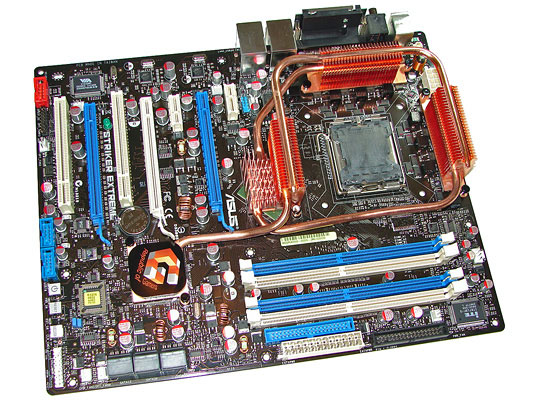 The ASUS Striker Extreme is based upon the recently released NVIDIA 680i SLI chipset that we reviewed a few weeks ago. The board supports LGA775 socket processors, features two full speed PCI Express x16 slots (SLI support), one x8 PCI Express slot (x16 physical), one x1 PCI Express slot, and two PCI 2.2 capable slots. Besides the six native Serial ATA 3Gb/s ports, ASUS has also included two external Serial ATA 3Gb/s ports via the Silicon Image 3132 chipset. The board features ASUS's new SupremeFX Audio Card that uses the ADI 1988B 8-channel HD audio codec and it includes an Array Microphone. Since the board is part of ASUS's Republic of Gamers product family it is equipped with a rear LCD status panel, onboard switches for power, reset, and clear CMOS, and a full software suite including Ghost Recon: Advanced Warfighter, Futuremark 3DMark06 Advanced Edition, Kaspersky Anti-Virus, and several Windows utilities. In initial testing we have reached 7x534FSB with our retail E6600 sample and general performance has been excellent. We will be comparing this board to our EVGA 680i, Intel BadAxe2, and hopefully the DFI RD600 board if it is not delayed again in the near future. 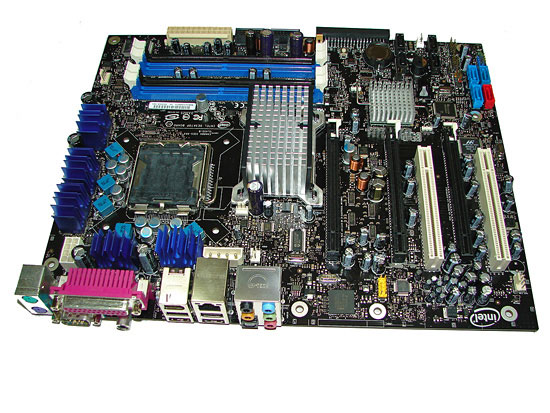 The Intel D975XBX2KR is based upon the 975X chipset that has proven itself over the course of the last year to offer excellent performance and stability. The D975XBX2 is a follow up to the original D975XBX board and features improved electricals and enhanced BIOS tuning for greater performance potential with the Core 2 Duo along with Core 2 Extreme quad-core support. The board supports LGA775 socket processors, features two full speed PCI Express x8 slots (x16 physical, CrossFire support), one x4 PCI Express slot (x16 physical), and two PCI 2.3 capable slots. The board comes with four native Serial ATA 3Gb/s ports via the Intel ICH7R and Intel added an additional four Serial ATA 3Gb/s ports via the Marvell 88SE6145 RAID controller.

The board is also equipped with a SigmaTel 9274D 8-channel HD audio codec. In initial testing this board has shown some very good overclocking tendencies, although the inability to reduce the CPU multiplier is a hindrance when compared to other 975X/P965 boards. The BIOS options available for an Intel branded motherboard are a wonderful surprise. The stock performance and stability is equal to other 975X motherboards on the market and the board is backed by an excellent support team. We will be comparing this product to our MSI 975X Platinum, Foxconn 975X7AB-8EKRS2H, and DFI 975X Infinity boards shortly.