Tulsa or the Xeon MP 71xx is the last Mohican of the "NetBurst / Pentium 4" tribe. It is the successor of the Xeon MP 70xx, also known as the infamous Paxville CPU. The Xeon MP 70xx was one of the worst CPUs in history from a performance/Watt view. The max TDP of Paxville was no les than 173W, and the CPU was limited to "only" 3 GHz, which is low for a NetBurst CPU as NetBurst CPUs were initially built for 4 GHz and more. According to Intel's own graphs, the fastest Opteron beats the best Xeon MP 7041 by no less than 30% in integer benchmarks....

Needles to say, the Xeon 70xx is and was a small disaster and one of the reasons why AMD's Opteron gained so much support so quickly. With that kind of heritage, the expectations for the Xeon MP 71xx, aka Tulsa, are not high. Is Tulsa yet another power gobbling CPU which can't outperform the competition? Although the CPU is sitting completely in the shadow of Intel's newest Core based Xeons, Intel engineering did spend a lot of time on trying to make the last NetBurst CPU perform well and consume less.

Tulsa is a dual core Xeon built on Intel's very successful 65 nm process. It is a true dual core, with both cores sharing some control logic and a large L3 cache which can be 4, 8 or 16 MB in size. Tulsa can scale up to 3.4 GHz, but we tested the more affordable 3.2 GHz version with 8 MB cache. 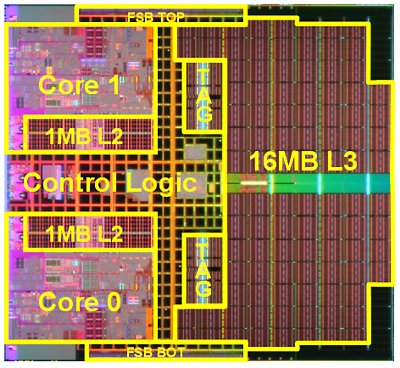 The Tulsa Die
The biggest Tulsa die weighs in at 435 mm², a result of containing 1.3 Billion transistors. By using slower but 3 times less "leaky" transistors, and letting the parts of the caches that are not accessed "sleep", the caches consume less than 1 W/MB. Tulsa can be used as an upgrade for Paxville and uses the same "Truland platform" with the Twin Castle chipset. If that sounds like gibberish, the Truland platform has been tested and explained here at AnandTech by Jason. 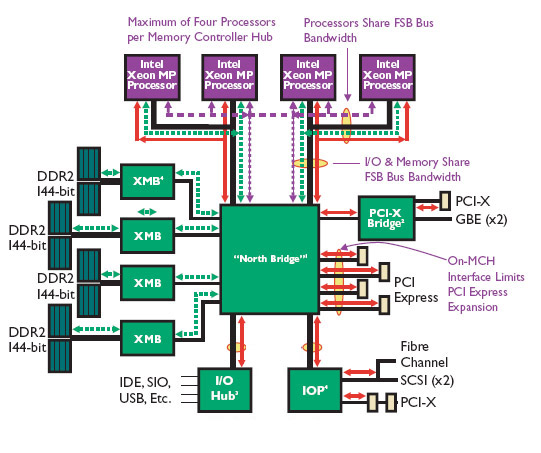 Two independent 800 MHz FSBs give each of the 2 sockets (4 cores) a 6.4GB/s pipe to the Northbridge. By using four XMBs (eXternal Memory Bridge), capacity and bandwidth is maximized. The XMBs find a place on a hot swappable memory board, and each XMB drives 4 memory slots. Below you can see the memory board; the XMB is under the heatsink.

The big performance booster is Tulsa's L3 cache. Tulsa's massive L3 is protected by Pellston technology. As caches get bigger, the possibility of getting a data error also increases. Pellston can disable a faulty cache line (128 byte) during BIOS initialization when all cache lines are checked, or it can even do so while the CPU is processing. The Pellston technology is in fact an algorithm that checks if a cache line error is the result of a hard error or a soft error. The actual "checking" whether a cache line is bad or not is done by an ECC algorithm on the 32 ECC bits which protects the L3 cache lines. In other words, Pellston makes the ECC protect cache a little smarter, allowing it to act on ECC errors rather than only reporting ECC errors.

The L3 cache is inclusive: it also contains the contents of the L2-cache. Thanks to the shared and inclusive nature of the L3-cache coherency traffic between the four CPUs is significantly reduced. Too much Coherency traffic can cause multithreaded applications that share variables among the different threads like OLTP databases and web servers to slow down.

So higher clock speeds, the newer 65 nm process, much less leaky transistors, and an extra shared L3 should allow the Xeon 71xx "Tulsa" to perform much better than the Xeon 70xx "Paxville" and consume a quite a bit less. Considering that Xeon 71xx has a TDP of 95W at 3 GHz while the Xeon 70xx needed 165 W at the same speed, it appears that Intel engineers have been very successful in reducing power consumption. 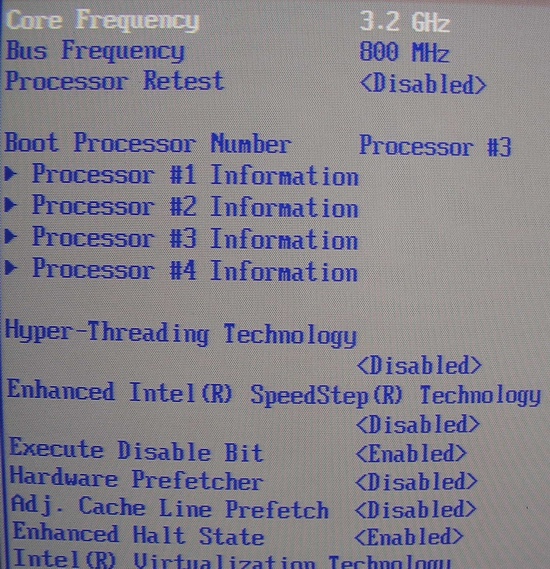 Intel's own benchmarks indicate 42% higher Integer throughput while the clock speed has increased by 13%. The most spectacular graph is the SPECjbb one: according to Intel, the Xeon 7140 is no less than 2.5 times faster than the old Xeon 7041. However, the benchmark is rather vague, as Intel does not reveal if the JVMs were completely the same. A different JVM can make a big difference. Tulsa also supports EM64T, the XD bit, HW Virtualization Technology and EIST as you can see from our BIOS setup screenshot.