The BIOS is feature rich like the DS3 and is geared towards the enthusiast with a significant amount of voltage/memory timing options available, provided you remember to press Ctrl-F1 while in the BIOS setup screen. Why Gigabyte continues to force the user to remember this keystroke sequence for additional BIOS options is beyond us. 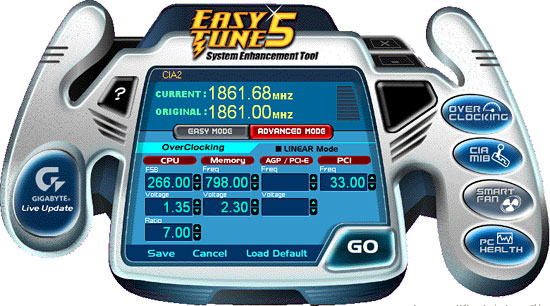 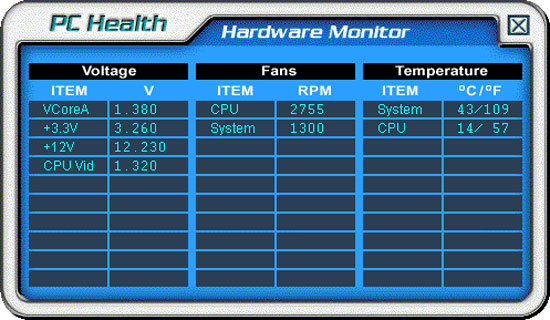 Gigabyte also includes a full suite of utilities for the board: EasyTune5, M.I.T. (Motherboard Intelligent Tweaker), Download Center, Xpress Install, @BIOS, Smart LAN, Smart Fan, and Virtual Dual BIOS. We found the @BIOS utility to be very handy for downloading and then updating the BIOS while in Windows. For those who are squeamish about updating their BIOS within Windows, Gigabyte has the Q-Flash utility built into the BIOS that allows updating from a floppy drive.

EasyTune5 is probably one of the most useful utilities in the Gigabyte arsenal and allows for control of the FSB settings and certain voltages within Windows, although a reboot is required to change most voltage settings. We found the utility worked well for squeezing out those last few FSB increases but we still found ourselves tweaking the BIOS the majority of the time. The PC Health monitor provided basic readings of the system but for some odd reason our CPU temperature liked to blip under 20C when capturing our screenshots. Our actual idle temps at stock settings were 25C on this board at time of testing. The Smart Fan utility allows control over the two fan headers located on the board.

Like our other boards in these roundups, Gigabyte includes a dynamic overclocking capability dependent on system load or preset attributes. This capability can be located within the BIOS under the C.I.A.2 setting. The settings range from Cruise (5% increase) to Full Thrust (17% increase). We decided to see how well this motherboard performed at Full Thrust. The blank screen after rebooting led us to believe we had selected the Zero Thrust option. After a quick CMOS clear event we backed down to the Turbo (15% increase) setting and were able to complete our benchmark testing. C.I.A.2 determined our Turbo settings would end at a final 7x308FSB providing a CPU speed of 2156MHz and our memory running at DDR2-924 with 5-5-5-15 settings. Just as predicted by C.I.A.2 an increase of just over 15% in the FSB speed was realized matching our settings on the DS3.