With all the talk about how general purpose G80 is, can we expect it to replace our shiny new quad core desktop processor? This isn't quite possible at this point due to the way most general purpose code uses the CPU. Many dependencies and low parallelism prevent NVIDIA from simply dropping this in a motherboard and running Windows on it.

But there are general purpose tasks that lend themselves well to the parallelism of G80, and NVIDIA is enabling developers to take advantage of this via a technology they call CUDA (Compute Unified Device Architecture).

The major thing to take away from this is that NVIDIA will have a C compiler that is able to generate code targeted at their architecture. We aren't talking about some OpenGL code manipulated to use graphics hardware for math. This will be C code written like a developer would write C.

A programmer will be able to treat G80 like a hugely parallel data processing engine. Applications that require massively parallel compute power will see huge speed up when running on G80 as compared to the CPU. This includes financial analysis, matrix manipulation, physics processing, and all manner of scientific computations.

NVIDIA has written a totally separate driver for G80 that will be used to run compiled C code targeted at G80. The reason they've done this is because the usage model for GPGPU programming is so different from that of graphics. Both the graphics driver and the CUDA driver can be running on G80 at the same time. This may allow programmers to take advantage of CUDA for in game physics on a single card. The driver changes the conceptual layout of the GPU into something that looks more like this:

This design, along with stream output capabilities, allows programmers to treat the GPU like a general purpose data processing engine. Each block of 16 SPs is able to share data with each other and can perform multiple passes on the data without having to write out and read back in from the onboard graphics memory. Developers are given the ability to manage the caches themselves. 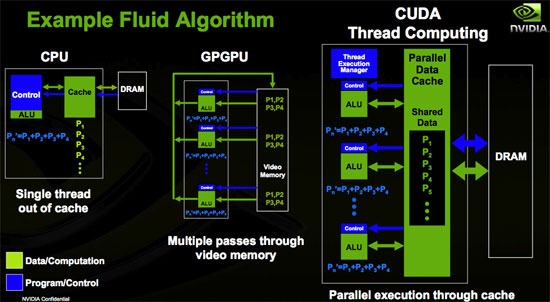 Will NVIDIA make an x86 CPU? Most likely not, but we may see NVIDIA produce even more general purpose CPUs for the handheld, CE, integrated markets. NVIDIA may end up becoming a producer of system on a chip solutions utilizing its graphics technology and simply expanding G80 to be more general purpose (and obviously get rid of some of the SPs in order to lower costs).