Aside from defining the capabilities and instructions that the different shaders must support, Microsoft also specifies attributes like precision, number of instructions that can make up a shader program, and the number of registers available to the programmer. Here's a table comparing DX9 and DX10 shader models. 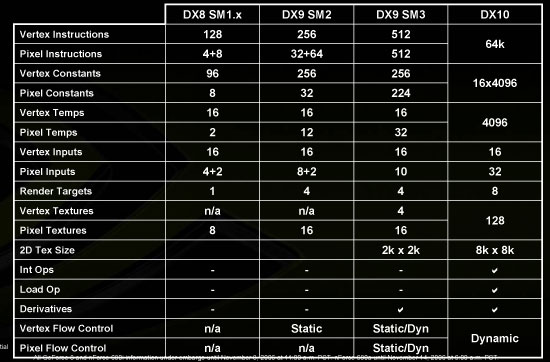 Along with these changes, Microsoft has made some lower level adjustments. Until now, shaders have been exclusively floating point. This means that operations like memory addressing and array indexing (which use integer values) must be done carefully if interpolation is to be avoided. With DX10, integer and bitwise operations have been added to the mix. This means programmers can make use of traditional data structures and memory operations. Increasing the flexibility of the hardware and enabling programmers to employ methods commonly used on more general purpose hardware will certainly be helpful in creating a better platform for developers to create the effects they desire.

Floating point operations have also been enhanced, as Microsoft has placed tighter requirements on how to handle the numbers. IEEE 754 is a specification that defines all aspects of floating point interaction. Sticking to such a standard allows programmers to guarantee that operations will be consistent between different types of hardware. Because Microsoft hasn't been as strict in the past, we've seen some issues where ATI and NVIDIA don't provide the exact same result due to rounding and accuracy differences. This time around, DX10 has very nearly IEEE 754 requirements. There are certain aspects of IEEE 754 that are not desirable in graphics hardware. These aspects have to do with over and underflow and denorms. The special results that are usually returned in these cases under IEEE specifications aren't as useful as clamping the value of a calculation to either the smallest possible result or largest possible result. With DX10, we do see the addition of NaN and infinity as possible results, and along with a better specification of accuracy and precision, those interested in general purpose computing on graphics processors (GPGPU) should be very happy.

What are Geometry Shaders?

A whole new shader type has been added this time around as well: Geometry shaders. These shaders are similar to vertex shaders in that they operate on geometry before it has been projected on to screen space where pixel processing can take over. Rather than operating on single vertices, however, geometry shaders operate on larger blocks: meshes. These meshes (made up of vertices) can be manipulated in a myriad of ways. Working with an object containing vertices gives programmer the ability to manipulate those vertices in relation to each other more easily. Vertices can even be added or removed from a mesh. The ability to write out data from the geometry shaders (rather than simply sending it on for pixel processing) will also allow software to reprocess vertices that have been added or altered by the geometry shaders. As an extension to geometry instancing, we will have more flexibility in manipulating instanced geometry in order to avoid the cut and paste look. All of these new features mean we should see things like particle systems move completely off of the CPU and on to the GPU, and geometry may begin to play a larger role in graphics in the future.

In the beginning, increasing the number of triangles that could be rendered in a scene was a huge factor in performance. After a certain point, software, CPUs, buses, and overhead in general started to get in the way of how much difference adding more triangles made. Rather than having millions of really tiny triangles moving around, it became much faster to use textures to simulate geometry. Currently, per pixel lighting combined with uncompressed normal maps do a great job of simulating a whole lot of geometry at the expense of a lot of pixel power. With the new 8k*8k texture sizes and other DX10 enhancements, there is a lot of potential for using pixel processing to simulate geometry even better. But the combination of unified shaders and geometry shaders in new hardware should start to give developers a whole lot more flexibility in how they approach the problem of fine detail in geometry.