The benefits of multi-core architectures are not limited to the games themselves. In fact, for many companies the benefits to the in-house developers can be far more important than the improvements that are made to the gaming world. Where actual games have to worry about targeting many different levels of computer systems, the companies that create games often have a smaller selection of high-end systems available. We talked earlier about how content creation is typically a task that can more readily take advantage of multithreading, and the majority of workstation level applications are designed to leverage multiprocessor systems. At the high-end of the desktop computing segment, the line between desktop computers and workstations has begun to blur, especially with the proliferation of dual and now quad core chips. Where in the past one of the major benefits of a workstation was often having dual CPU sockets, you can now get up to four CPU cores without moving beyond a desktop motherboard. There are still reasons to move to a workstation, for example the additional memory capacity that is usually available, but if all you need is more CPU power there's a good chance you can get by with a dual or quad core desktop instead.

Not surprisingly, Valve tends to have computers that are closer to the top end desktop configurations currently available. We asked about what sort of hardware most of their developers were running, and they said a lot of them are using Core 2 Duo systems. However, they also said that they have been holding off upgrading a lot of systems while they waited for Core 2 Quad to become available. They were able to do some initial testing using quad core systems, and for their work the benefits were so tremendous that it made sense to hold off upgrading until Intel launched the new processors. (For those of you that are wondering, on the graphics side of the equation, Valve has tried to stay split about 50-50 between ATI and NVIDIA hardware.)

One of the major tools that Valve uses internally is a service called VMPI (Valve Message Passing Interface). This utility allows Valve to make optimal use of all of the hardware they have present within their offices, somewhat like a distributed computing project, by sending work units to other systems on the network running the VMPI service. Certain aspects of content creation can take a long time, for example the actual compilation (i.e. visibility and lighting calculations) of one of their maps. Anyone that has ever worked with creating levels for just about any first-person shooter can attest to the amount of time this process takes. It still takes a lot of effort to design a map in the first place, but in level design there's an iterative process of designing, compiling, testing, and then back to the drawing board that plays a large role in perfecting a map. The problem is, once you get down to the point where you're trying just clean up a few last issues, you may only need to spend a couple minutes tweaking a level, and then you need to recompile and test it inside the gaming engine. If you are running on a single processor system -- even one of the fastest single processor systems -- it can take quite a while to recompile a map.

The VMPI service was created to allow Valve to leverage all of the latent computational power that was present in their offices. If a computer is sitting idle, which is often the case for programmers who are staring at lines of code, why not do something useful with the CPU time? Valve joked about how VMPI has become something of a virus around the offices, getting replicated onto all of the systems. (Yes, it can be shut off, for those that are wondering.) Jokes aside, creating a distributed, multithreaded utility to speed up map compilation times has certainly helped the level creators. Valve's internal VRAD testing can be seen below, and we will have the ability to run this same task on individual systems as a benchmark. 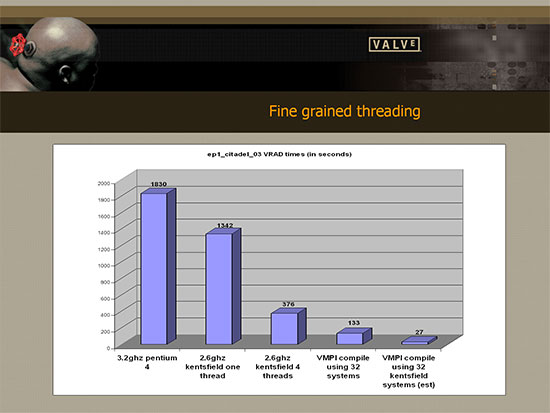 Running as a single thread on a Core 2 processor, a 2.67 GHz QX6700 is already 36% faster than a Pentium 4 3.2GHz. Enabling multithreading makes the Kentsfield processor nearly 5 times as fast. Looking at distributing the work throughout the Valve offices, 32 old Pentium 4 systems are only ~3 times faster than a single Kentsfield system (!), but more importantly 32 Kentsfield systems are still going to be 5 times faster than the P4 systems. In terms of real productivity, the time it takes Valve's level designers to compile a map can now be reduced to about half a minute, where a couple years back it might have been closer to 30 minutes. Now the level designers no longer have to waste time waiting for the computers to prepare their level for testing; 30 seconds isn't even enough time to run to the bathroom and come back! Over the course of a project, Valve states that they should end up saving "thousands of hours" of time. When you consider how much most employees are being paid, the costs associated with upgrading to a quad core processor could easily be recouped in a year or less. Mod authors with higher end systems will certainly appreciate the performance boost as well. We will take a closer look at performance scaling of the VRAS map compilation benchmark on a variety of platforms in a moment.