There are currently only two kinds of hard disks: those which work with SCSI commands and those which work with (S)ATA commands. However, those SCSI commands can be sent over three disk interfaces:
Fibre Channel is much more than just an interface; it could be described as a complete network protocol like TCP/IP. However as we are focusing on the disks right now, we consider it for now as an interface through which SCSI commands are sent. Right now, Fibre channel disks sales amount to about 20% of the Enterprise market and are mostly sold in the high end market. SCSI-320 used to have about 70% of this market, but it is being replaced quickly by SAS[1]. Some vendors estimate that SAS drives are already good for about 40% of the enterprise market. It is not clear which percentage of enterprise drives are SATA drives, but it is around 20%.


Will SATA kill off SCSI?

One look at the price of a typical "enterprise disk" -- whether it be a SCSI, FC or SAS disk -- will tell you that you have to pay at least 5 times and up to 10 times more per GB. Look at the specification sheets and you will see that the advantage you get for paying this enormous price premium seems to be only a 2 to 2.5 times lower access time (seek + latency) and a maximum transfer rate that is perhaps 20 to 50% better.

In the past, the enormous price difference between the disks which use ATA commands and the disks which use SCSI commands could easily be explained by the fact that a PATA disk would simply choke when you sent a lot of random concurrent requests. As quite a few of reviews here at AnandTech have shown, thanks to Native Command Queuing the current SATA drives handle enterprise workloads quite well. The number of concurrent I/O operations per second is easily increased by 50% thanks to NCQ. So while PATA disks were simply pathetically slow, the current SATA disks are - in the worst case - about half as fast as their SCSI counterparts when it comes to typical I/O intensive file serving.

There is more. The few roadblocks that kept SATA out of the enterprise world have also been cleared. One of the biggest problems was the point to point nature of SATA: each disks needs its own cable to the controller. This results in a lot of cable clutter which made SATA-I undesirable for enterprise servers or storage rack enclosures. 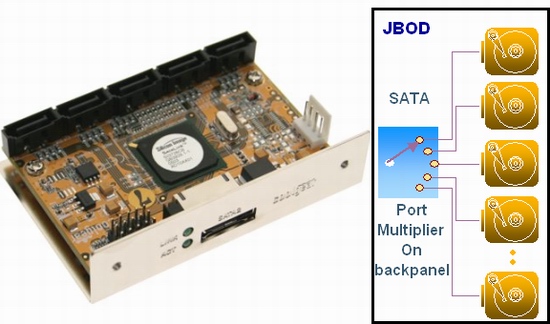 Port multipliers are mostly used on the back panel of a server or the backplane of a storage rack. The second way is to use your SATA disks in a SAS enclosure. We will discuss this later.