As an outspoken member of the community, and one of the first to break the story that Dell would eventually acquire Alienware, it was only a matter of time before Rahul Sood's company, Voodoo Computers, was acquired as well.

With Dell already having purchased Alienware, the next logical match would be Voodoo and HP. So today, without further ado, HP is announcing that it has signed a definitive agreement to acquire Voodoo Computers, Inc.; the deal will close sometime between now and October 31, 2006.

The Dell/Alienware purchase brought into the public eye some of the interest that many of the major players have in the enthusiast and gaming PC markets, thus it is no surprise to see interest in the space by one of Dell's most fierce competitors: HP.

The acquisition will be structured in a bit of a different fashion than what we saw with Dell and Alienware, mainly in that there appears to be much tighter integration within HP itself. Although Voodoo will continue to exist as a high end brand, both Rahul and his brother, Ravi Sood, will be taking roles in HP's newly created Gaming division. Rahul Sood will be the Chief of Technology for HP's Gaming Division Worldwide, while Ravi will be Chief Strategist for the worldwide Gaming Division.

Rahul will also get a seat at the R&D council for HP's Personal Systems Group, meaning that his input may also be used in the design and execution of other HP personal systems.

Neither Voodoo nor HP would comment on any planned products for either the Voodoo business unit or HP's Gaming division other than to state that the goals going forward would continue to be to build the best possible hardware for the customers. In other words, we should expect to see both strong AMD and Intel solutions, coming out of Voodoo and HP Gaming.

As we mentioned before, Voodoo will exist as a separate business unit with a different business model and goals than HP's Gaming division. Without the intense pressures of remaining an independent company, Voodoo will not be forced to take its brand downstream to remain afloat; with the backing of HP, the goal is for Voodoo to be a truly high-end, Ferrari-class brand allowing HP Gaming products to service the masses.

From HP's standpoint, it's not necessarily gamers that the gaming division is interested in attracting. According to Rahul, only about 25 - 30% of Voodoo's customers use their Voodoo PCs for "hardcore gaming", the rest are more casual gamers that use their systems for much more. It's these users that have fairly stressful, high-end usage models (many of which are content creation or consumption focused) that HP is hoping to better target with the expertise of Voodoo at the helm.

As far as Rahul and Ravi are concerned, the fit with HP makes a lot of sense because of HP's incredible focus on R&D. As two people very passionate about their work, being able to have access to even a sliver of HP's $3.5B yearly investment in R&D is reason enough to be excited about the deal. While we couldn't get any specifics as to what sort of R&D we would see productized in the near future, cooling and chassis design obviously come to mind as two areas that could leverage HP's investments in R&D.

Given the close proximity to the Dell/Alienware deal, inevitably many will wonder (us included) about how much of this deal was reactionary rather than premeditated. Rahul was very clear in mentioning that the very first discussions of an alliance between HP and Voodoo dated back to January 2005, but as most of these deals go, it was met with delays that kept things from happening until now.

Both Rahul and Ravi Sood seemed very upbeat about the acquisition and we can only wish them the best of luck in their new roles at HP. With both HP and Dell seriously looking at the enthusiast/gaming space, this consolidation will hopefully result in more interesting options for the market going forward. It's often times the smaller companies like Alienware and Voodoo that have the passion and focus on technology that can easily get lost or forgotten in a larger company like Dell and HP. With Voodoo's DNA now infused with HP, hopefully we'll see positive ramifications extending far beyond a new line of gaming PCs but a more innovative impact across HP's entire consumer lineup of desktops. 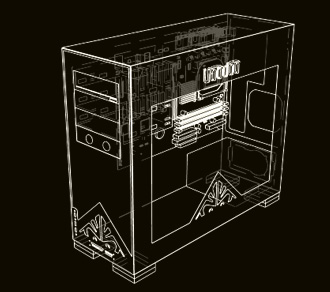 The PC industry has been in dire need of a manufacturer that could focus on something beyond building a more affordable computer, but actually innovate beyond building a generic box. We've been waiting for an Apple-like entity to come around and breathe new life into the PC and take some out there concepts and make them reality. While the verdict isn't out on Dell/Alienware and definitely not HP/Voodoo, here's hoping that at least one of them will be able to think further outside the box than we've seen from PC OEMs in the past.