For the first IDF after Intel's Conroe launch you have to give Intel credit, the folks are trying their best to make things interesting. Earlier today we reported on Intel's 65nm ramp, transition to 45nm, Conroe/Woodcrest shipments and upcoming quad-core solutions among other things.

We're rounding out our first day's coverage with an update from the Intel labs on Silicon Photonics, more information on multi-threaded gaming in Remedy's upcoming thriller: Alan Wake, Intel's Robson technology for notebooks and the world's first demonstration of DDR3 memory on an unannounced Intel desktop chipset.

Silicon Photonics Interconnects: Coming to a Chip Near You

For the past five years, Intel has been hard at work on building a silicon laser. Using light as a medium for data transmission is nothing new, after all many high speed networks operate over fiber optic cable, however the idea of using light as an alternative to electrical signaling at the chip level is a bit more revolutionary.

Photonic signaling is in many ways superior to electrical signaling as you can get much higher bandwidths out of an optical bus than you can out of an electrical bus. As the number of CPU cores and their operating frequencies increase tremendously, the demands for a higher speed I/O interface will as well. There will come a time where sending electrical data over copper wires is no longer fast enough to keep up with the growing bandwidth needs of these processors, and it's at that point where we'll have to turn to another, higher bandwidth solution. Intel hopes that its research into Silicon Photonics will hold the key to that solution. 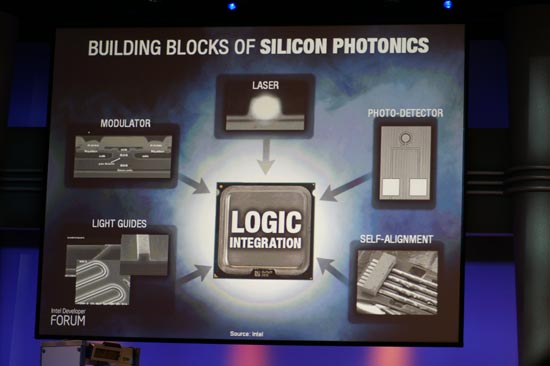 As we mentioned earlier, transmitting data using light has been around for ages, whether in the form of igniting a fire to mean "help!" or using light (or the absense of it) to represent binary data. The trick is being able to generate and use light entirely on silicon, because if you can do that, then you can use light to transmit data on die. In order to build silicon around optical interfaces you need to first be able to generate light on die itself, in other words you need to be able to generate light using electricity within the confines of a silicon chip.

In the past, Intel's Silicon Photonics demonstrations have used externally generated light as a laser source and then worked on integrating the various other parts of the equation on silicon. Just recently, Intel demonstrated its first hybrid silicon laser that was made using standard silicon maufacturing techniques. The name hybrid silicon laser comes from the fact that the laser is produced from a combination of Indium Phosphide and standard silicon. 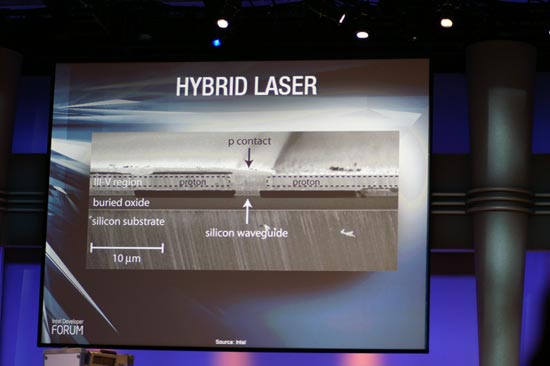 Wave guides are etched out of the silicon layer of the chip, allowing the eventual laser to be channeled, but in order to actually generate the light using electricity you need a compound that will produce light - in this case, it's Indium Phosphide (a III-V compound as it is produced using elements from the III and V columns of the periodic table). 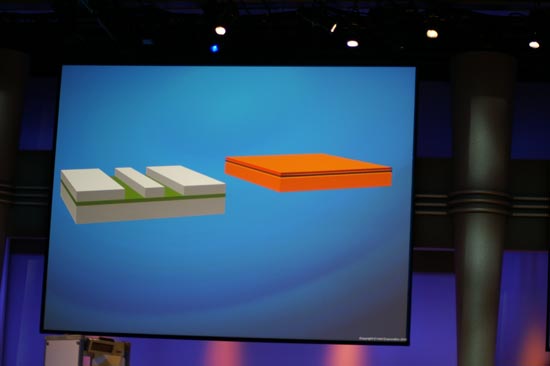 A layer of Indium Phosphide is created to be the same size as the silicon which the waveguides are carved out of.Both the silicon and InP are exposed to an oxygen plasma to create a glue-like layer, approximately 25 atoms thick, on both layers. 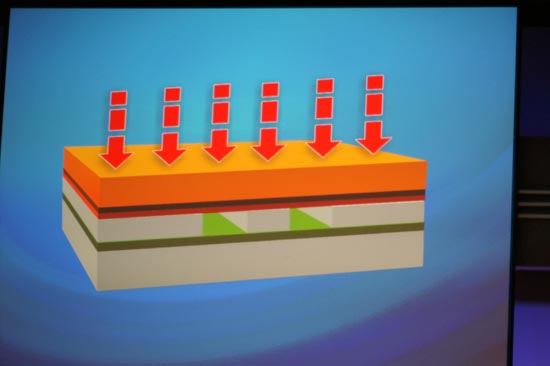 Then, the silicon and InP are fused together and channels are etched out of the top InP layer: 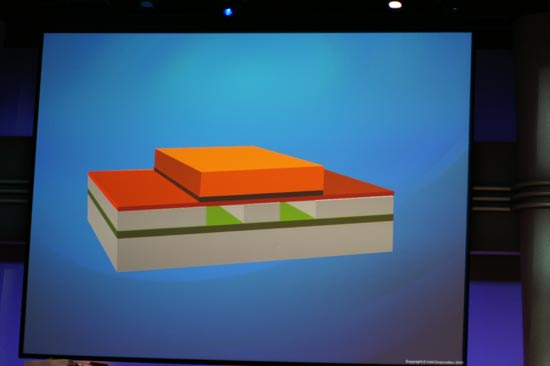 When you apply a charge across the InP layer, the electrons cause the InP to generate light that is then reflected into the waveguides in the silicon, thus creating a laser within silicon. 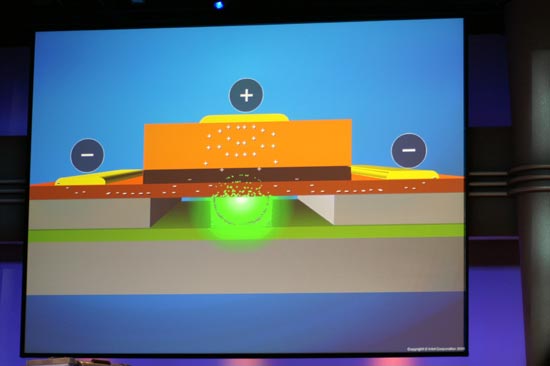 Being able to generate the laser on silicon is just one step of the whole process, but it is a very important one. With lasers generated, you can then encode binary data on and multiplex multiple lasers into a single output, offering tremendous bandwidth. 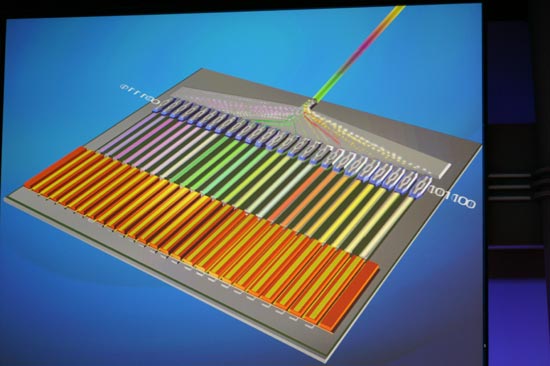 The data can then be sent over the single output to a de-multiplexer and decoder that would recover the original binary data and convert it back into electrical signals that could be used by regular silicon based processors: 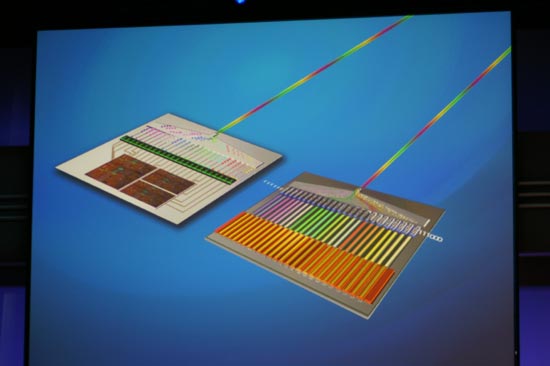 Intel is still years away from being able to use any of this silicon photonics technology in a product, but progress is being made. Intel demonstrated its hybrid laser at IDF, simply showing that it works and was produced using conventional silicon manufacturing processes.

The apparatus below basically holds a hybrid laser chip, provides it with power and is placed next to an IR camera to detect the light produced by the chip: 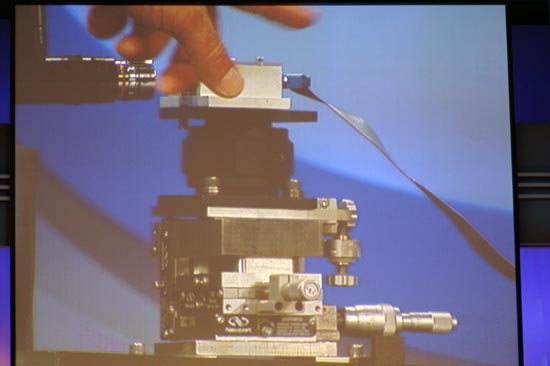 As you can see the chip does produce light, and Justin Rattner even slid his hotel keycard between the camera and the chip to confirm that the demo was live and that the chip was actually producing the light. 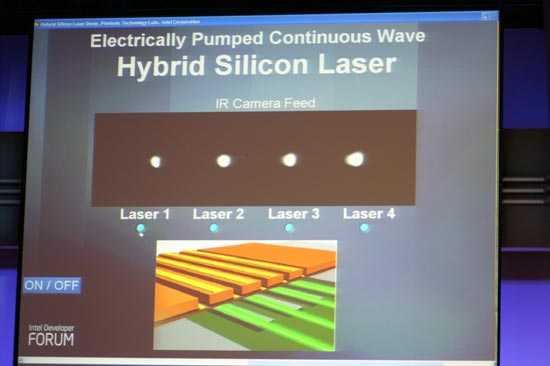 The implications of Intel's work in silicon photonics are tremendous, as it would allow Intel the bandwidth necessary to connect CPUs with tens or hundreds of cores to the outside world. While we're still years away from seeing this technology used in a product, we were glad to see Intel keep us updated on its progress. 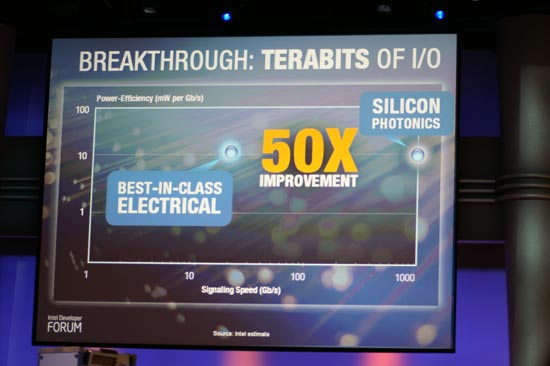 Alongside Intel's focus on silicon photonics to deliver what it is calling "Terabits of I/O", Justin Rattner also talked about being able to deliver Terabytes of bandwidth and Teraflops of performance for the future of Intel microprocessors. The Terabytes of bandwidth would come through the use of stacked die technology, which Rattner talked about at IDF six months ago. As a recap, stacked die technology could be used to create a layer of cache that would attach directly to a CPU in order to give it a very large, very high performance memory subsystem that was still quite low latency. 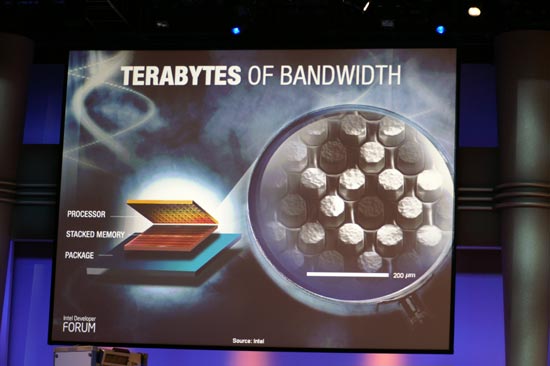 Intel's Teraflop CPU could theoretically use a stacked die approach to deliver the sort of memory bandwidth it would need to keep all 80 of its FP cores fed. 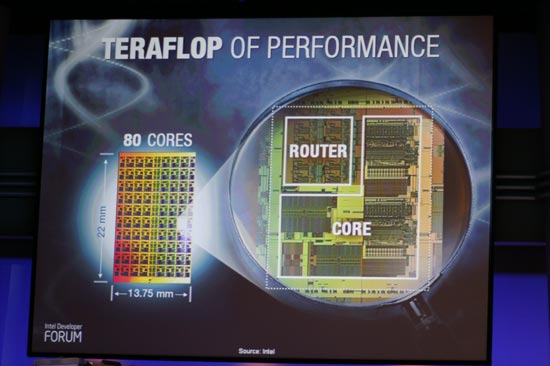