As usual, gaming performance was tested with a variety of current games. We ran benchmarks with our standard 1280x1024 resolution with 4x antialiasing and with 8x anisotropic filtering (if the game has support) enabled. Given the number of users that run 19 inch LCDs these days, 1280x1024 represents one of the most commonly used resolutions. We decided to also stress the graphics subsystem since we are benchmark testing the motherboard to compare the performance of ATI CrossFire on the P965 and 975X platforms. In order to do this we were particularly interested in increasing the resolutions and graphic settings so we are including 1600x1200 4xAA/8xAF and 1920x1200 4xAA/8XAF resolutions. We feel these resolutions would be the best indicator of performance for user with a high-end CrossFire and CPU setup. Our review is focused on the capability of the Intel P965 chipset and how well CrossFire works on the ASUS P5B Deluxe with the current Catalyst 6.9 drivers, not on the respective graphics solutions. We will examine graphics card scaling and other GPU attributes in another article.

This benchmark is performed using DICE's built-in demo playback functionality with additional capture capabilities designed in house. When using the built-in demo playback features of BF2, frames rendered during the loading screen are counted in the benchmark. In order to get a real idea of performance, we use the instantaneous frame time and frames per second data generated from our benchmark run. We discard the data collected during the loading screen and calculate a result that represents actual game play. While DICE maintains that results over 100fps aren't always reliable, our methods have allowed us to get useful data from high performing systems.

During the benchmark, the camera switches between players and vehicles in order to capture the most action possible. There is a significant amount of smoke, explosions, and vehicle usage as this a very GPU intensive Battlefield 2 benchmark. We run Battlefield 2 using the highest quality graphics settings available in the video options. The game itself is best experienced with average in-game framerates of 35 and up. 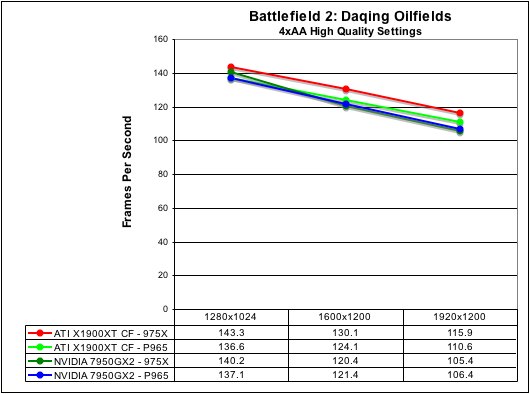 On average we see our 975X CrossFire solution performing about 5% better than the P965 setup. We found the P965 setup to be perfectly playable and did not witness any stutters or graphic anomalies during testing. The P965 7950GX2 configuration actually score slightly better at the higher resolutions than the 975X, although this benchmark is more GPU driven so any potential platform differences will not be clearly evident. However, this does indicate there is not a measureable graphics performance penalty when comparing x16 graphics capability between the two chipsets.

This benchmark is performed using Croteam's built-in demo capability in the Serious Sam 2 engine. We utilize the included Branchester Demo and capture the playback results using the Ctrl-~ function. The benchmark features a large number of combatants, explosions, and general mayhem. The benchmark is primarily GPU sensitive with the actual percentage of GPU/CPU/Audio activity being displayed during the benchmark run. We typically find this game is very playable at average in-game rates of 60 and above. We maximize all settings except antialiasing and anisotropic filtering within the general and advanced video settings. 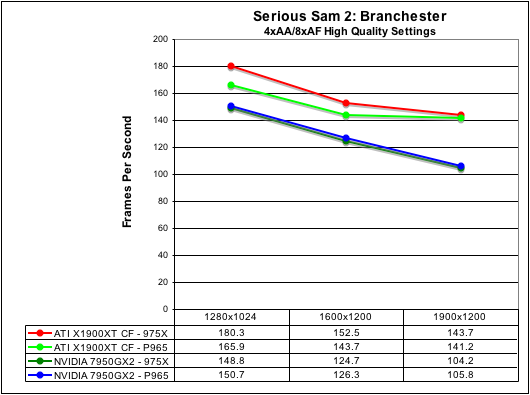 We see our 975X CrossFire setup performing 9% better at 1280x1024, 6% at 1600x1200, and less than 2% higher at 1920x1200 as the game becomes GPU limited. As in the Battlefield 2 testing the game playback showed no problems and generated beautiful visuals. Once again the P965 7950GX2 configuration scores better than the 975X and indicates a nice GPU solution for this platform.

F.E.A.R. uses the built-in performance test that generates graphical test scenes based upon the actual game engine. This test consists of a couple of different action sequences, a stressful water flyby, and heavy use of shadows while traveling through hallways. F.E.A.R. is a very graphics intensive game and we switch all settings to maximum. During our testing of F.E.A.R., we noted that the "soft shadows" don't really look soft. They appear to us as multiple transparent shadows layered on top of each other and then jittered to appear soft. Unfortunately, the performance hit is drastic and the shadows generated do not look realistic so we disable this setting. Average frame rates for F.E.A.R. can dip into the teens without creating major problems; that is not good for most first person shooters, but the game is still playable at around 25 fps with 35 fps or higher being preferred. 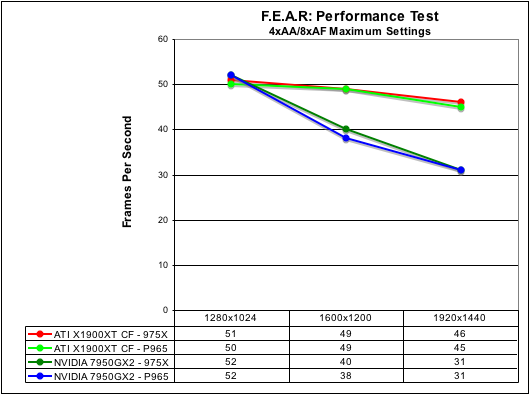