Additionally, Quake 4 limits frame rate to 60 fps during gameplay whether or not VSync is enabled. Performance characteristics of a timedemo do not reflect actual gameplay. So why do we do them? Because the questions we are trying to answer have only to do with the graphics subsystem. We want to know what graphics card is better at rendering Quake 4 frames. Any graphics card that does better at rendering Quake 4 frames will play Quake 4 better than another card for Quake 4. While that doesn't mean the end user will see higher performance in the game, it does mean that the potential for seeing more performance is there. For instance, if the user upgrades a CPU before the next graphics card upgrade.

Our benchmark consists of the first few minutes of the first level. This includes both inside and outdoor sections, with the initial few fire fights. We tested the game with Ultra Quality settings (uncompressed normal maps), and we enabled all the advanced graphics options except for VSync. Id does a pretty good job of keeping framerate very consistent, and so in-game framerates of 25 are acceptable. While we don't have the ability to make a direct mapping to what that means in the timedemo test, our experience indicates that a timedemo fps of about 35 translates into an enjoyable experience on our system. This will certainly vary on other systems, so take it with a grain of salt. But the important thing to remember is that this is more of a test of relative performance of graphics cards when it comes to rendering Quake 4 frames -- it doesn't directly translate to Quake 4 experience.

It seems that even an overclock can't save NVIDIA's newest part from succumbing to the latest ATI OpenGL enhancements that have drastically improved Doom 3 engine based game performance. Of course, not all OpenGL games faired well with the latest round of drivers from ATI, with City of Heros/Villains performing very poorly in spite of its use of OpenGL. ATI cards seem to do very well in this benchmark indeed with the X1900 GT coming out the clear performance and value winner. 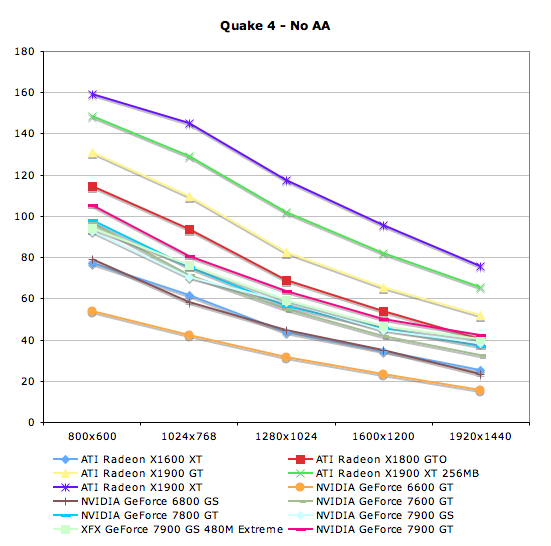 Enabling 4xAA serves to clench Quake 4 as a benchmark that greatly favors ATI hardware when running at the highest possible quality settings. This is the exact opposite of what we have been saying about Quake 4 performance ever since the game launched, but it seems ATI has finally solved their OpenGL performance issues -- at least with this particular engine. 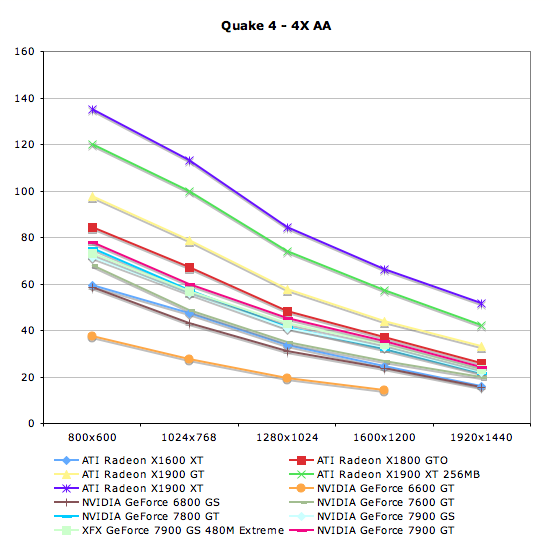