Just like the outgoing Core Duo processor, Intel's Core 2 Duo lineup uses its arbitrarily determined model number system.  While the previous Core Duo chips were all numbered as T2000 series processors, the new Core 2 Duos are all T7000 and T5000 chips.  The T5000 models feature a 2MB L2 cache while the T7000 have a full 4MB L2, and as the name implies all of these CPUs are dual core.

The table below features all of the Core 2 Duo parts that will be available this quarter:

The point of Intel's pricing strategy with Core 2 Duo on the mobile side is to quickly phase out out Core Duo and replace it with Core 2 Duo.  The chart below details Intel's plans to ramp Core 2 Duo in its mobile segment: 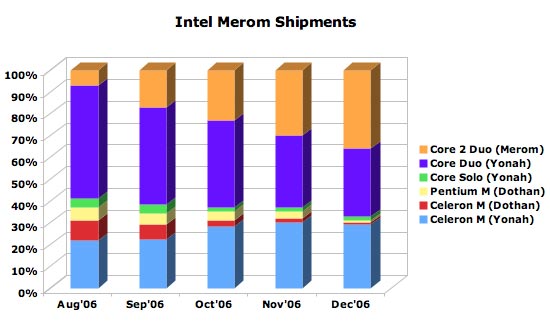 You'll note that Intel is quite aggressive with ramping Core 2 Duo up, but going into 2007 over a quarter of Intel's mobile processor shipments will still be Core Duo.