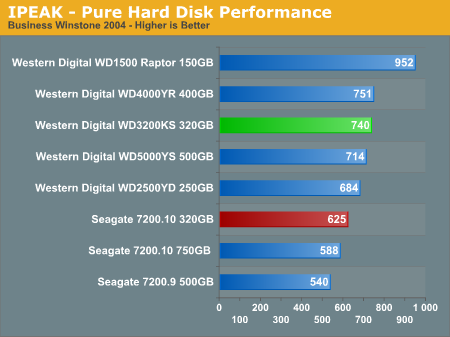 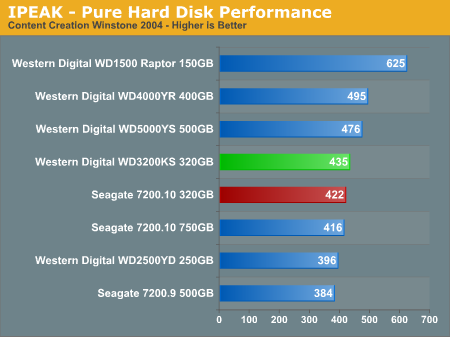 Our IPEAK Winstone benchmarks offer a glimpse into how well our hard disk drives will handle general office applications, media encoding, and graphics manipulation. While the business applications that are being tested tend to be more CPU bound at times, the performance of the hard drive can and will make a difference in the more disk intensive video and graphics applications where large media files are typically being edited.

As expected the WD Raptor places first as its 10k rpm spindle speed and optimized cache play an important role in its ability to sustain high transfer rates, especially in the Content Creation benchmark where transfer block sizes are significantly larger than in the Business application benchmark.

The WD3200KS drive makes a very strong showing in these benchmarks compared to the Seagate 7200.10 320GB drive as it places 18% ahead in the Business Winstones and 3% in the Content Creation test. This continues the trend we noticed in the PCMark05 tests as the WD drive was generally faster in the general usage and application benchmarks. The Seagate 7200.10 drives continue to have issues with data that is not sequentially ordered on the drive.

The IPEAK based General Task benchmarks are designed to replicate utility based application tasks that typically are disk intensive and represent common programs utilized on the majority of personal computers. While the WinRAR program is very CPU intensive it will typically stress the storage system in short bursts. Our anti-virus benchmark will stress the storage system with continual reads and sporadic write requests while the defragmentation process is split between continual read and write requests. 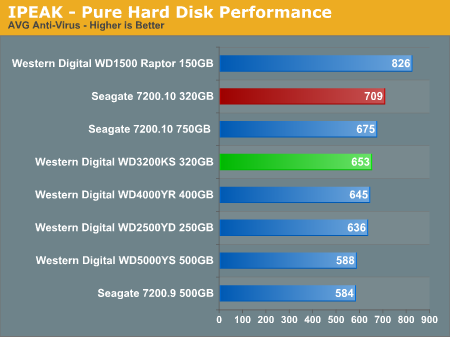 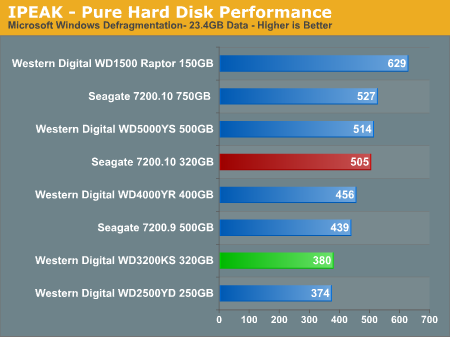 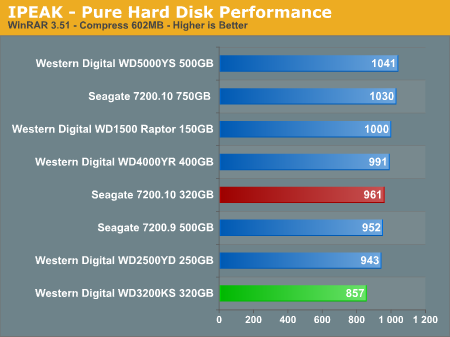 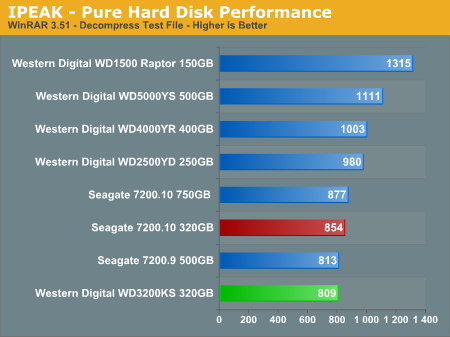 The Seagate 7200.10 320GB turns the tables on the WD SE16 320GB drive by posting a 33% advantage in the defragmentation test, 12% and 5% in the WinRAR tests, and 8% in the AVG Anti-Virus test, a far cry from the 50% difference in the PCMark05 Anti-Virus test. Our antivirus IPEAK test file has a greater degree of randomness in the reads which creates a penalty for the Seagate drive compared to the PCMark05 tests. Overall, the pure hard drive performance of the Seagate drive in these daily application tasks is impressive.