Power Consumption: Who is the king?

Intel promised us better performance per watt, lower energy consumed per instruction, and an overall serious reduction in power consumption with Conroe and its Core 2 line of processors. Compared to its NetBurst predecessors, the Core 2 lineup consumes significantly lower power - but what about compared to AMD?

We took two power measurements: peak at idle and peak under load while performing our Windows Media Encoder 9 test. 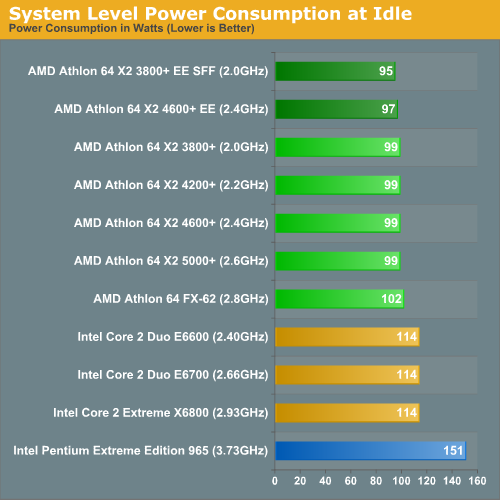 Taking into consideration the fact that we were unable to compare two more similar chipsets (we will take a look back at that once retail Intel nForce 5 products hit the shelves), these power numbers heavily favor Intel. The releative power savings over the Extreme Edition 965 show just how big the jump is, and the ~15% idle power advantage our lower power AMD motherboard has over the Intel solution isn't a huge issue, especially when considering the performance advantage for the realtively small power investment. 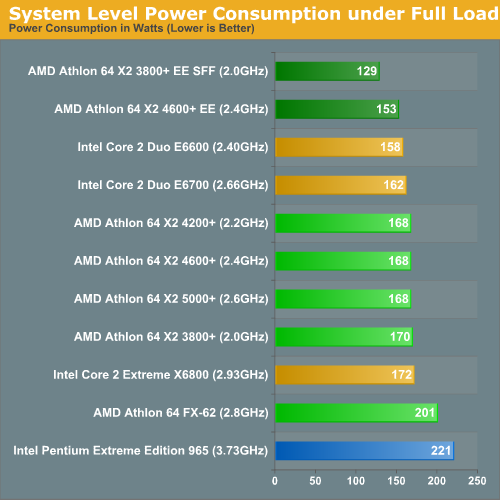 When looking at load power, we can very clearly see that AMD is no longer the performance per watt king. While the Energy Efficient (EE) line of X2 processors is clearly very good at dropping load power (especially in the case of the 3800+), not even these chips can compete with the efficiency of the Core 2 line while encoding with WME9. The bottom line is that Intel just gets it done faster while pulling fewer watts (e.g. Performance/Watt on the X6800 is 0.3575 vs. 0.2757 on the X2 3800+ EE SFF).

In fact, in a complete turn around from what we've seen in the past, the highest end Core 2 processor is actually the most efficient (performance per Watt) processor in the lineup for WME9. This time, those who take the plunge on a high priced processor will not be stuck with brute force and a huge electric bill.