One thing we pointed out in our earlier preview coverage of Intel's Core 2 Extreme is that the new processors have extremely low latency memory access, despite relying on the same memory controller as the previous generation of Intel CPUs. 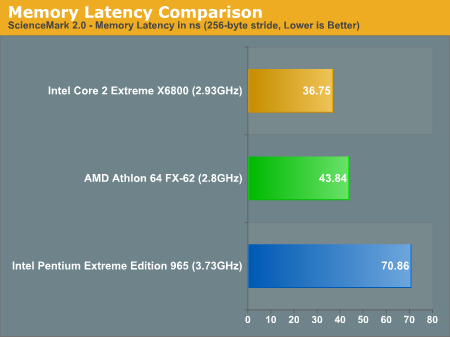 Intel's Core 2 processors now offer even quicker memory access than AMD's Athlon 64 X2, without resorting to an on-die memory controller. While Intel will eventually add one, the fact of the matter is that it's simply not necessary for competitive memory performance today thanks to Intel's revamped architecture. Update:As many astute readers have pointed out, Core 2's prefetchers are able to work their magic with ScienceMark 2.0, which results in the significant memory latency advantage over AMD's Athlon 64 FX-62. This advantage will not always exist; where it doesn't, AMD will continue to have lower latency memory access and where it does, Intel can gain performance advantages similar to what ScienceMark 2.0 shows.

Because of the Core 2's intelligent prefetchers doing too good of a job with ScienceMark memory latency test, we wanted to also showcase situations where Core 2 would feature slower memory accesses than the AMD platform with its integrated memory controller. Everest's results are more in line with what we'd expect to see, with the FX-62 offering over 23% faster memory accesses than the X6800. CPU-Z's latency tool also reported somewhat similar findings, with an 18% performance advantage due to AMD's integrated memory controller. CPU-Z also provided us with numbers that showcase how well Core 2 can perform if its prefetchers are able to "guess" correctly; at lower strides the Core 2 Extreme manages faster memory access than the FX-62. The 128-byte stride numbers are indicative of what will happen if the pre-fetchers are not able to get the Core 2 the data it needs, when it needs it, while the 64-byte numbers show you what can happen when things go well.