As mentioned earlier, the alpha Savage3D board received would not work on any motherboard (including Super7 motherboards) other than the Intel SE440BX Pentium II BX Motherboard.  The only tests that were run were performed on a Pentium II - 400 test system, more benchmarks will follow when AnandTech receives a supposedly more stable Rev. B board in the coming weeks however until then these benchmarks should suffice for a high-end comparison at least.  Hopefully the Rev. B board will boast Super7 compatibility which will allow us to get a better picture of the slowly unfolding 2D/3D combo scene.

NOTE: The crusher.dm2 tests would not complete on the alpha Savage3D board due to stability issues neither would 1024 x 768 tests. 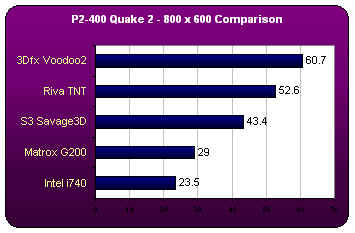