NVIDIA nForce 500: Biostar and MSI Aim for the Gold 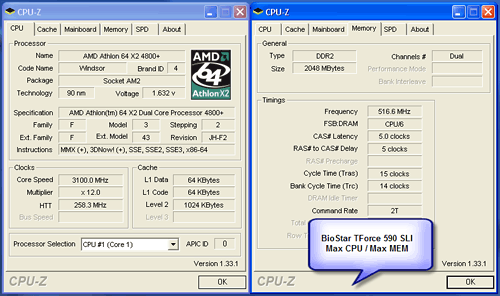 This board is an excellent overclocker although it does have a couple of quirks. We found in our overclocking tests that it was preferable to set the board to a range below your expected overclock target, reboot the board, ensure the settings are accepted, and then return into the BIOS to set your final overclock parameters.

If we changed the base HTT or Memory settings outside a 10% variance from the accepted settings then the board would balk and enter into the self recovery process. We also found additional headroom by utilizing NTune 5.0 to increase HTT once we had our voltages and memory settings locked in. In fact, we were able to reach a very stable 12x264HTT in this manner although the board would not boot at this setting.

Our ability to reach a benchmark stable 12x259HTT speaks volumes about this board's capability even with the limited memory voltage options. Our 4800+ CPU used for testing these two boards is not a very good sample for overclocking as noticed by the 1.6V we had to use to reach these speeds. 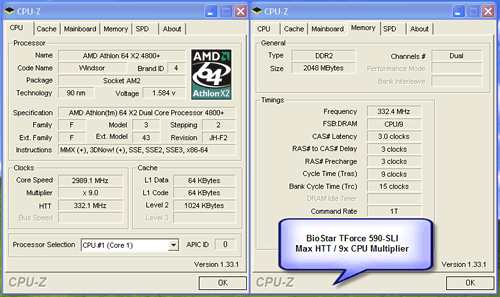 The 9x333HT setting is the second highest result we have seen to date in our AM2 testing. The board was extremely stable at this setting and Biostar informed us they have reached a 7x435HTT setting with a new AMD AM2 2800+ processor. Based upon our test results we can certainly believe this board is capable of higher HTT speeds than we reached with our early manufacturing sample.

Memory stress tests look at the ability of the Biostar TForce 590-SLI Deluxe to operate at the officially supported memory frequencies of 800MHz DDR2 at the best performing memory timings the Corsair Twin2X2048-8500C5 revision will support.

The Biostar board was very stable with two (1GB) DDR2 modules in Dual-Channel mode at the settings of 3-3-3-8 2T at 2.1V. The board would set 5-5-5-15 2T if the memory selection was left on auto. We did not notice any issues throughout our testing with our settings provided the voltage was set to 2.1V. We were able to run at 3-3-3-8 1T at 667MHz but our best overall performance scores were reached at DDR2-800 with the 3-3-3-3-8 2T settings. This provided the best balance of memory bandwidth and low latencies for our AM2 processor. We should expect to see 1T ability at DDR2-800 in the near future based upon AMD's current plans and their historical ability at massaging the memory controller logic.

Corsair 8500 modules were then installed into all four available memory slots, which is much more stressful on the memory subsystem than testing just two DDR2 modules.

The Biostar board was completely stable with four (1GB) DDR2 modules in Dual-Channel operation at the settings of 3-4-3-9 2T with the voltage remaining at 2.1V. These are excellent results as the board performed superbly throughout our memory testing regimen that included eight to twelve hour runs of MemTest86, Prime95, and our benchmarks suites along with numerous iterations of SuperPI set at 32m.