This statement by the famous Greek critic, philosopher, physicist, and zoologist Aristotle expresses our beliefs about the technological capabilities of Seagate. Seagate has been at the forefront of storage design, manufacturing, and service capabilities while attaining the status of the world's largest supplier of hard disk drives with their acquisition of Maxtor a few months ago.

Seagate recently announced the Barracuda 7200.10 as the successor to their Barracuda 7200.9 series with much surprise as the 7200.9 product line has only been available for a short period of time. Although the Barracuda 7200.10 series will become the flagship product for personal desktop solutions, the 7200.9 series will continue to be offered in capacities under 200GB as a "value performance" product once the 7200.10 drives are shipping in volume later this spring. As with previous Barracuda product group updates, the naming succession follows the standard point upgrade path but this change is anything but a simple number revision. The new Barracuda 7200.10 product will be the first desktop centric hard drive to feature perpendicular recording.

For nearly fifty years, the storage industry has been on a path where the longitudinal technology currently utilized would eventually become a limiting factor in drive capacities. Over the last decade the drive manufacturers have been doubling and at times quadrupling storage capacity at a dizzying rate in order to meet continuing demands from users. The standard method of increasing the amount of capacity in a drive is to either add more platters or increase the density of the data on each platter. Increasing the density of data that can be stored on a platter is the preferred manner, as it will allow for an overall increase in drive storage along with resulting performance and cost advantages by reducing the number of components. However, this solution requires significantly more effort from a research and development viewpoint that can lead to additional complexity and cost. While the storage manufacturers have been able to develop and implement some incredible technologies to achieve the capacities, cost, and drive performance we currently experience there is a limit to what can be achieved with today's technology.

The next evolutionary step in the storage industry for solving today's current issues is the utilization of perpendicular recording technology. This technology has been researched and discussed for a number of years by the various drive manufacturers. It has its roots in the late 19th century work of Danish scientist Valdemar Poulsen, who is generally considered the first person to magnetically record sound using perpendicular recording.

What is Perpendicular Recording Technology? Simply put, during perpendicular recording the magnetization of the disc stands on end, perpendicular to the plane of the disc, instead of lying in the disc's plane as it does in current longitudinal recording. The data bits are then represented as regions of upward or downward directed magnetization points. The data is written to a soft magnetic under-layer that functions as part of the write field return path and basically generates an image of the recording head that doubles the available recording field, resulting in a higher recording density compared to longitudinal recording. 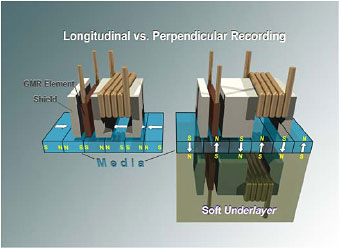 In longitudinal recording, the data bit magnetization lies in the plane of the disc and switches between pointing in the same and then opposite directions of the disk movement. In order to increase areal densities and provide greater storage capacity in longitudinal recording, the data bits must be arranged and shrunk in a very tight pattern on the disc media. However, if the data bit becomes too small, the magnetic energy holding the bit in place can become so small that thermal energy can cause it to demagnetize, resulting in a condition known as superparamagnetism.

To avoid superparamagnetism, engineers have been increasing the coercivity - the field size required to write a bit - of the disc media. These fields are limited by the magnetic materials making up the write head and will soon effectively limit drive sizes utilizing longitudinal recording. Although additional capacities are still achievable, the drive industry will be moving to perpendicular recording technology shortly as longitudinal recording has basically hit the proverbial brick wall after being utilized for nearly 50 years.

Perpendicular recording will eventually enable areal densities of up to 500 Gbpsi (Gigabits per square inch) with current technology as compared to the 110 Gbpsi rates in today's longitudinal recording designs. This results in an almost five fold increase in storage capacities with a typical 3.5-inch desktop drive being able to store two terabytes of information. Current perpendicular technology has allowed Seagate to demonstrate 245 Gbpsi capabilities with a data transfer rate exceeding 480Mb/s (7200.10 already does).

While the launch of the Barracuda 7200.10 series is certainly impressive for Seagate, it is not the first use of perpendicular recording technology in their product lines. Seagate is currently shipping their Momentus 5400.3 mobile hard drive with this technology, and it has allowed the mobile sector to finally break the 100GB mark with drives featuring capacities up to 160GB. Seagate has also introduced perpendicular technology into their Enterprise product line with the release of the Cheetah 15K.5 product series; it has effectively doubled the storage capacity of 15K enterprise level drives overnight.

Let's see how the newest Barracuda performs against other large capacity SATA drives.