While there were a few computer hardware manufacturers at E3, the main focus of E3 is obviously the gaming entertainment industry. Many developers, public relations people and other industry professionals such as console manufacturers were there as well. 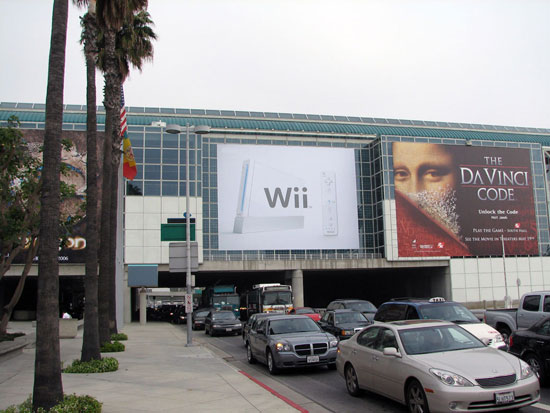 The most well known manufacturers in the gaming industry: Sony, Nintendo, and Microsoft, were displaying their latest developments in some of the largest booths on the show floors. Here, we'll be taking a closer look at Sony's and Nintendo's latest creations: the PlayStation3 and the Wii, respectively. The PlayStation 3 and the Nintendo Wii are being shown for the first time to the public at this year's E3. Microsoft's Xbox360 has already launched, of course, and while it had a large presence at E3, we will be focusing on the two new consoles.

Most of the hype around the convention floors seems aimed at the Nintendo Wii. The line to view the Wii is about three hours long, if not more for some people. As we said in our previous article, the Nintendo Wii can be found inside a closed off section of Nintendo's booth with about 75 game stations available running various games and demos, covering all the traditional genres as well as some more obscure offerings. There are first person shooters, adventure games, and of course the famous Mario and tennis games, not to mention a couple musical titles. 27 titles all told, and more in development. 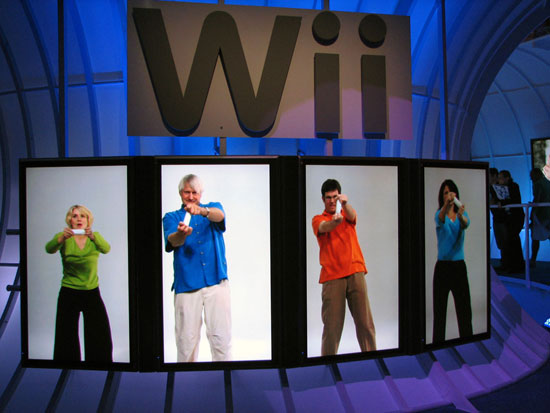 In our opinion, the Nintendo Wii looks like it will be a great hit amongst the younger children and the less hardcore gamers. We see the Wii being a success for those individuals who are looking at just having fun gaming rather than looking for the best available graphics. The graphics for the Wii are not fantastic, but we believe that the people the Wii is targeted towards aren't the type to look for such things. We noticed that, for example, the upcoming Metroid graphics look just about exactly like the GameCube's Metroid Prime. Other games like Zelda: Twilight Princess and Mario Galaxy look slightly better, but nothing to compare to the graphical power of the Xbox360, PlayStation 3, or a high-end PC. The graphics are roughly the same as the GameCube, only with an upgrade to support widescreen (720x480) and 480p (640x480) resolutions.

Naturally, Nintendo isn't pushing graphics as the major selling point for the Wii. It's all about the new gameplay experience, powered by the new controllers. Evaluating gameplay is a more subjective task, but we did have a chance to play around with the controllers. Has Nintendo found the Next Big Thing, or is the new wireless wand just a gimmick?

With games like Table Tennis, we found the controller to be very easy to use. Just a slight left or right movement quickly moves the paddle side-to-side. We found making our hand movements as smooth as possible aided our control of the cursor greatly. Jerking/twitching movements cause the virtual hand to jump around all over the screen, and doesn't allow you to effectively control the game. This is likely a limitation of the sensitivity of the controllers, but we were able to adapt quickly to the requirements.

Many games such as Mario Galaxy needed the Nunchuk along with the standard remote to play the game. You hold the Nunchuk in one hand and the regular remote in the other hand, and the combination of the two allows you to control movements and actions as well as camera angle. We found this to be a little confusing at first because of the separate controllers, but as we spent more time with this setup, again, we grew accustomed to the new controls, and the gaming experience became much more enjoyable. As an example, think back to the first time you used a keyboard and mouse to control a first person shooter, rather than just using the keyboard. It takes a little time to adapt, but once you're comfortable with the new controller scheme, it greatly enhances the gameplay experience.

After seeing the sensor bar the other day, many of you wanted to know how it works. We were able to get together with a developer and he was kind enough to answer most of our questions regarding the controller setup.

The sensor bar emits an infrared field out directly in front of the TV. In order to accomplish this, it is necessary to place the sensor bar in the same plane as the TV, either on top of or below the TV is recommended. As the remote is pointed towards the TV, it interacts with the infrared field. Using triangulation logic, the remote is able to determine location, angle, and distance; as you move the remote around, the change in location/angle/distance is calculated. The remote then communicates with the console via Bluetooth, sending this information to it, and from there the software determines how your movements relate to the game world/application.

The sensor bar doesn't receive any type of signal from the wireless remote and is there purely to generate the field. The remote also has a gyrometer and accelerometer to allow it, for instance in the tennis game, to know the difference between a back hand or regular swing. You need to maintain a proper distance from the sensor bar as well; if you come to within about three feet or less, it will not work precisely.

We found first person shooter games to be a little difficult, as we weren't fully accustomed to the controller just yet. There's definitely a learning curve with the new controller mechanism, but long-term that shouldn't present too many difficulties. We noticed quite a few people had already mastered the remote fairly well. 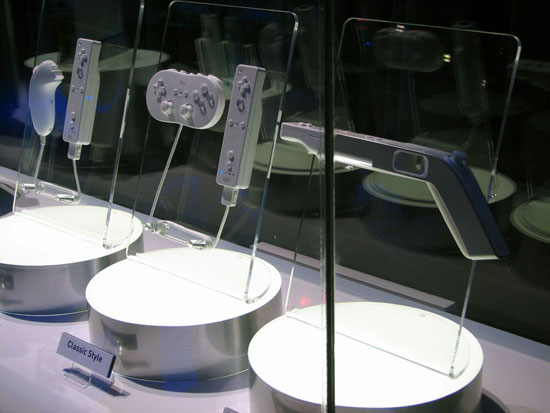 The Wii's remote is fairly light and holding it in the two positions is very natural. As we mentioned before, the on-screen cursor you see when moving the remote around is very sensitive, but once you get accustomed to it, it becomes quite simple to use. We weren't able to find out whether the cursor's sensitivity can be configured to one's liking, but we're hoping something to that effect will be implemented. 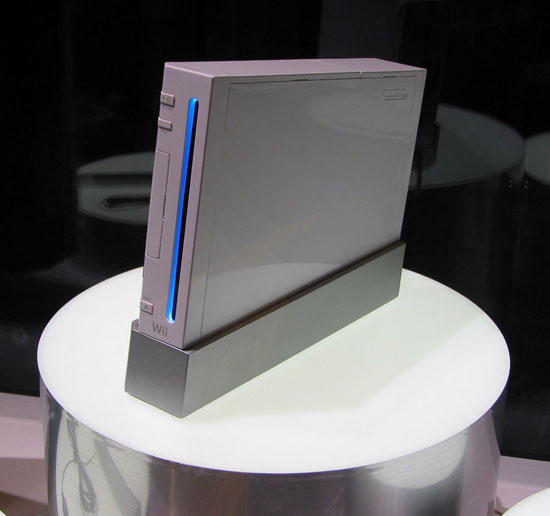 We also were able to confirm that Nintendo has no plans for HD output or any Blu-Ray/HD-DVD technology in the future for the Wii. They are aiming to keep costs down to a minimum, and keeping such technology out helps achieve this goal. The size of the console is fairly small and in comparison to the Xbox360 and the PS3 (and the original PS2, for that matter) is significantly more compact. We weren't able to get very close to the Wii, so we can't give precise measurements; however, it appears to be slightly larger than your typical 5.25 inch DVD-ROM drive.