DDR has a somewhat narrow operating range. Mainstream DDR might extend from DDR400 to perhaps DDR433. The very best, and most expensive, DDR might extend from DDR400 to a bit over DDR600. The useful range of fast DDR is even less because as the timings increase for higher speed the bandwidth starts to fall. Therefore top bandwidth with many of the top DDR products peaks somewhere in the DDR500 to DDR550 range and bandwidth normally drops as we move higher in frequency at poorer timings.

While ratios can be used with lower performing memory, the main purpose of ratios is to offset the performance limitations of cheaper memory so the user can enjoy the increased performance of overclocked processor without having to similarly invest in expensive memory capable of 1:1 memory overclocking. The point is that we will not be investigating memory ratios on DDR memory, since they are not generally used to increase memory bandwidth and performance.

DDR2 is a different animal when it comes to ratios. As DDR2 matured, memory makers and processor manufacturers have sanctioned higher and higher speed grades of DDR2 that are achieved with memory ratios. Users select and use higher rated DDR2 products to increase memory performance. On the Intel platform there was theoretically a price to pay since the memory controller was on the chipset.. This meant 1:1 DDR2 memory is theoretically top performance without compromise, while other speeds had some degrading from maximum performance due to the overhead of the FSB ratios.

AMD uses HyperTransport, which means there is no FSB. All memory speeds should theoretically perform as if they were 1:1 on HT. This simply means additional DDR2 speeds should carry no penalty at all. A user can choose DDR2-400, DDR2-533, DDR2-667, DDR2-800, DDR2-1066, and other DDR2 speeds based on performance needs and their budget, as there is no one speed which is best in a HyperTransport design.

For all of these reasons, performance of AM2 was benchmarked at DDR2-400, DDR2-533, DDR2-667, and DDR2-800. Due to limitations of current AM2 motherboards in that no timings faster than 3 are available for memory, all 4 speeds were evaluated at 3-3-3 memory timings. This is a fast memory timing for DDR2 at any of those speeds, as the fastest DDR timings we have tested at lower DDR2 speeds is 3-2-2. At DDR2-800, 3-3-3 are the fastest timings ever tested at this speed. 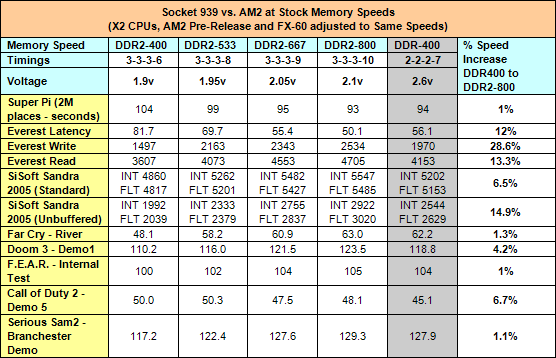 Benchmark results were very interesting. From a broad perspective, memory bandwidth and latency of DDR400 was matched by DDR2 at a speed of just over DDR2-533. Put another way, DDR2-533 provides equivalent bandwidth and latency to DDR400 on this 4th spin of AM2. DDR2-667 provided a bit better performance, and DDR2-800 3-3-3 provided a 12% improvement (lower number) in Latency over DDR400 and a 13.3% to 28.6% improvement in bandwidth depending on the memory benchmark used. It is interesting that memory writes enjoyed the biggest bandwidth boost.

Unfortunately, the added memory bandwidth did not translate into the kinds of increases in real-world gaming performance that many might expect. Gaming Performance at DDR2-800 3-3-3 at the same CPU speed increased 1% to 6.7% in our tests - with all except Call of Duty 2 in the 1% to 4% range. Call of Duty 1.2 was used in these tests, which supports dual processors, and test results did not follow the same expected scaling of other benchmarks. For this reason, the Call of Duty 2 results are considered suspect until we have more experience with Revision 1.2.

Since increased memory bandwidth did not translate into similar increases in gaming performance we can only conclude that this iteration of AM2 is not particularly memory starved - a result that was really expected. This does open the door for future upgrades and revisions of AM2 that might make better use of the available memory bandwidth with fast DDR2 memory.