"Strive for excellence, not perfection."

This quote by noted author H. Jackson Brown Jr. describes our feelings about the ECS C19-A SLI motherboard. Elitegroup Computer Systems (ECS) was formed in 1987 and has since become one of the largest motherboard and notebook manufacturers in the world. ECS currently has around 20% of the global motherboard market while manufacturing over 2.5 million units per month for OEM customers and under the ECS brand name. ECS has concentrated on designing and producing low-cost products with feature sets that are attractive to the mass market.

Recently, ECS has been branching out into the enthusiast/gamer market with their Extreme series of product. While this product line is not to be mistaken for the top products offered in this grouping by DFI or others, it is a refreshing change to see one of the largest OEM manufacturers addressing this market segment with affordable enthusiast/gaming level products. While the ECS C19-A SLI motherboard that we are reviewing today is not part of their Extreme series, it does offer a very good feature set and performance level for the casual enthusiast/gamer in the Intel market space. More information about the entire line of ECS products can be found here. 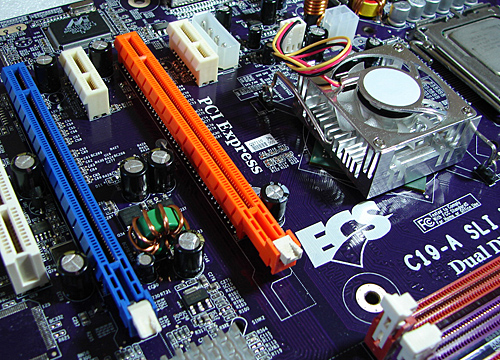 The ECS C19-A SLI motherboard is based on the recently announced nForce4 SLI XE SPP (C19XE) and nForce4 SLI XE MCP (MCP51) chipsets. Our first impression of the motherboard was very good as the layout of the board is very clean and well organized for an SLI capable system. The performance of the board was very competitive with the Intel 975x and 945P solutions while offering a price target under US $90.

While we did not notice the same initial performance issues with the recently tested Biostar TForce4 U 775, the board did generate some of the same frustrations.

This board was not forgiving if we made a mistake in our performance evaluation testing. The system would perform well in our general applications and benchmarks at a given setting and then completely refuse to boot or go into a reboot loop if we increased the FSB or especially the Memory speeds by a few MHz past a stable threshold. We quickly found out the limits of the board and if nothing else, the board's ability to fail at certain settings was consistent.

The Self Recovery System (S.R.S.) within the BIOS would allow the system to recover from most configuration issues consistently except for errant memory settings. The inability of the system to recover from these memory miscues would require the usage of the clear CMOS jumper. Unfortunately, we ran into an issue with this process as the clear CMOS process sometimes required the removal of the battery for the jumper process to work. This process is not acceptable, considering how well other BIOS recovery systems work. As with the recent Biostar BIOS update, we feel this issue can be diminished greatly with additional BIOS tuning. 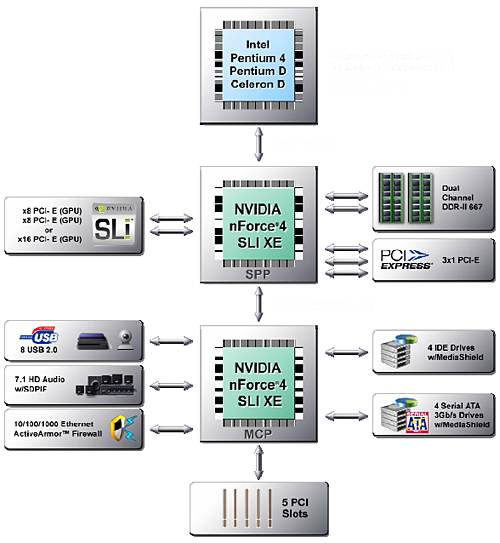 The nForce4 SLI XE is a newly released design for the mainstream performance market and will compete directly against the Intel 945P and Intel 975x chipsets. The nForce SLI XE configuration is being offered and marketed as an affordable entry level product with enthusiast features and performance. Unlike the Intel 945P chipset, the nForce4 SLI XE offers full support for all Socket 775 processors, including the Extreme Edition units. Further details on the release of this product can be found in our preview article located here.

Now, let's take a closer look at the features and performance that this board offers.