The Intel Developer Forum doesn't officially start until later today, but we hit the ground running with a handful of meetings shortly after landing in San Francisco.  The first on the list was AMD, who have made it a habit of coming to just about every IDF to keep some balance.

If you're expecting something earth shattering from AMD or finally some specifications for their 2007 CPU lineup, you'll have to wait longer.  AMD tells us that after Socket-AM2 and its mobile/server variants are launched then they will begin talking about their new architectures.  We've tried to get more, sooner, but haven't been successful yet.  Now on to what we were able to see.

The first topic of the meeting was AMD's dual core Turion, which now officially has the name Turion 64 X2. 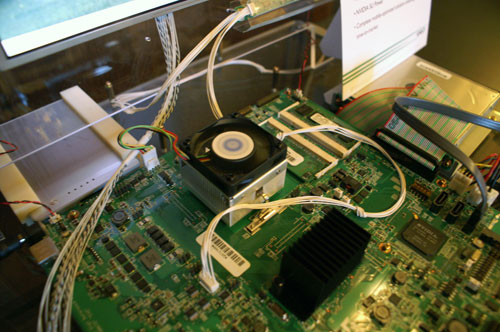 The Turion 64 X2 will be using AMD's new Socket-S1, the mobile version of Socket-AM2.  The 638-pin mobile Socket-S1 has a dual channel DDR2 interface like the 940-pin desktop AM2 socket.  You may be wondering how AMD was able to cram more than twice the data pins in a 638-pin package as they did with the original Socket-754 Athlon 64s, the answer is that the first generation of AMD's Athlon 64 was a bit over-designed for its needs.  We've heard that around 10% of the pins on the original Athlon 64s were unnecessary, so with some tweaking it's not too far fetched to see a dual channel memory controller implemented in fewer pins. (Note: the original article incorrectly stated that Socket-S1 uses 754 pins, AMD provided us with incorrect information and has since updated us). 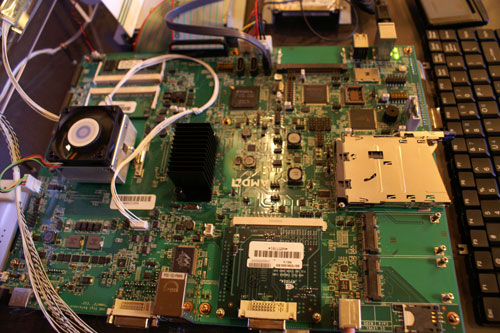 AMD has finally narrowed down the Turion 64 X2 launch to Q2 of this year, whereas in the past they had only mentioned a mid-year release. 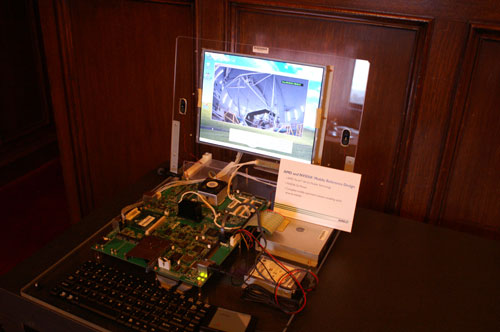 The platform AMD was demonstrating the Turion 64 X2 on was one of their mobile reference platforms.  AMD currently offers OEMs reference Turion platforms based on both ATI and NVIDIA chipsets, some of which AMD claims offer 5+ hours of battery life.  The idea being that OEMs who don't want to invest their own time and resources into engineering a Turion platform can simply borrow from AMD's reference design.  Obviously the reference design isn't going to produce the most unique notebook ever, but it's a starting point. 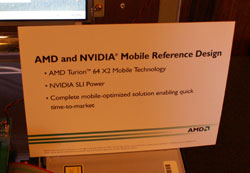 A big theme for AMD recently has been their collaboration with partners such as ATI and NVIDIA, instead of competing against them for chipset market share.  It's a position that AMD can take since they don't manufacture their own chipsets, however it is difficult to say if AMD would be singing the same tune if they had the same manufacturing capacity as Intel.