"The more alternatives, the more difficult the choice."

This quote by Abbe' D'Allanival conveys our feelings about the ASRock 939SLI32-eSATA2 product. ASRock began operations in 2002 as the value brand group for Asus. ASRock has a history of providing very unique and, at times, unusual products based upon alternative chipsets at inexpensive price points. Although ASRock offers a complete line of products based upon mainstream chipsets from Intel and NVIDIA, it is their products based upon ULi, SIS, and VIA chipsets that are usually far more interesting. More information about the entire line of ASRock products can be found here.

The ASRock 939SLI32-eSATA2 motherboard is based on the ULi M1697 and M1695 chipsets. ASRock has done a masterful job in utilizing these recently released chipsets to create a board that might make you think twice about spending any additional money for an NVIDIA nForce4 dual X16 SLI solution. In fact, this board fully supports NVIDIA SLI technology and it works seamlessly with the included ULi PowerExpress Engine Enabling driver although the board is not SLI certified by NVIDIA. Of course, now that NVIDIA has completed their acquisition of ULi, we have to wonder how many manufacturers will be able to provide a similar solution utilizing these chipsets or how long this driver will be available. 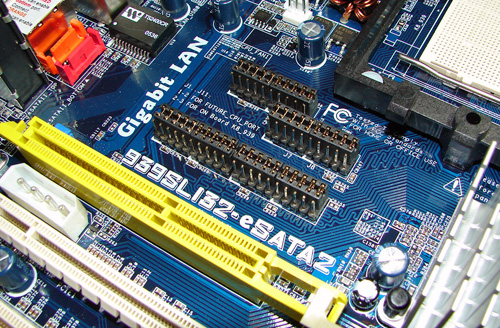 Our initial impression of the ASRock 939SLI32-eSATA2 upon opening the box was like a child opening a birthday present, full of surprise and wonderment at the object that we were holding. We were impressed at the extensive list of features included on the board and were very surprised that a board this feature-laden sells at a retail price of US $85. After the initial excitement over our gift from ASRock wore off, we began to wonder if this present would be one that we would toss in the closet, regift to an unsuspecting editor, or cherish over time. The old adage, "If it's too good to be true, it probably is." began to enter our minds as we studied the board's extensive features and read the marketing materials. The only way to come to a decisive conclusion was to test the board thoroughly and utilize it in a variety of situations. We accomplished our goal of running this board through the gamut of test suites with various peripherals while also utilizing it as our everyday office/game system. We were impressed with the board, and our results might change the way that you look at a value based solution.

During our testing and general usage of the ASRock 939SLI32-eSATA2, we found the board's stability to be exceptional and it delivered competitive results in the latest synthetic and game benchmarks. However, our initial impressions were not as positive at the beginning of the test phase as the board would sporadically produce random results in the synthetic benchmarks while generating lockups in the memory benchmarks. Our issue was with the pre-release test BIOS and was not visible in the production release BIOS on the shipping boards. While the performance of the board was slightly lower in most benchmarks, the stability was superb with the release BIOS. 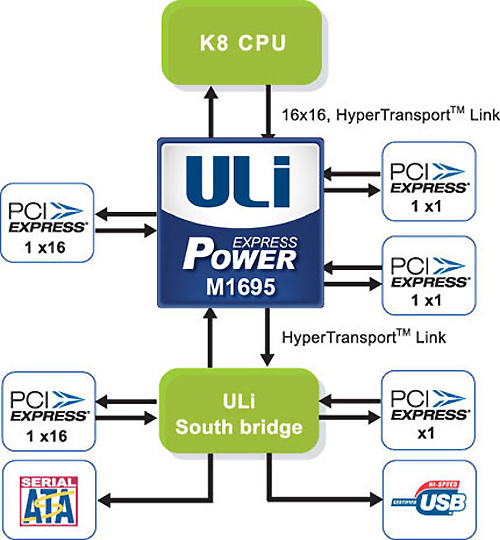 ASRock utilizes the ULi M1695 HyperTransport PCI Express Tunnel chip for the North Bridge. The ULi M1695 is designed to interconnect seamlessly with other HyperTransport based Host or Bridge chips and, in this case, is interconnected to the ULi M1697 acting as the South Bridge. The M1695 fully supports one PCI Express x16 lane or two x8 lanes for graphics cards and two PCI Express x1 or one PCI Express x4 expansion slot. The M1695 offers transfers of up to 16-bit HTT downstream and 16-bit HTT upstream links at 2.0 GT/s, ensuring an excellent communication path between the processor and connecting bridges. 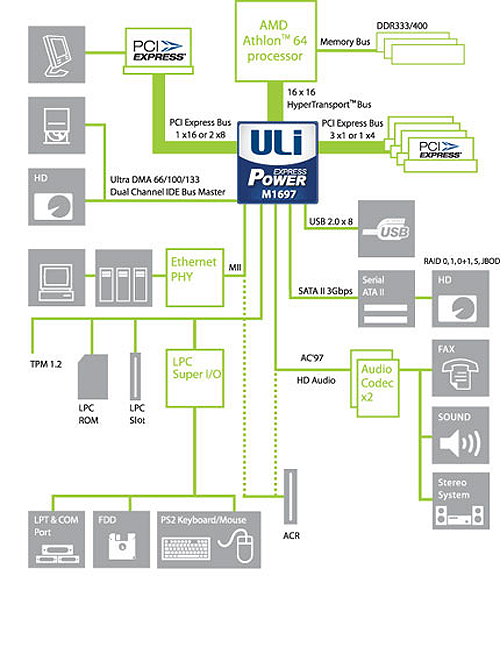 Let's find out if this alternative offering leads to a difficult choice.