The HQV Benchmark DVD is made by Silicon Optix and has become a standard for testing the quality of DVD decoders. The tests were made to showcase the capabilities of very high end DVD hardware, and it just happens to make a very objective series of benchmarks for testing more moderately priced DVD players. The DVD contains numerous video clips to test how well the decoder handles some common problem-areas for some of the lower quality players. The videos test things like picture detail and noise reduction, and points are scored for each test according to how well the video processor does.

ATI recently came out with some new drivers which were meant to improve the score on these tests, and today we are testing them against the latest version of NVIDIA's PureVideo decoding. It should be noted that while ATI's DVD decoder is free with an AIW card, the PureVideo decoder adds additional cost to NVIDIA products.

Many of the functions tested in HQV aren't limited in application to DVD decoding. Things like deinterlacing need to happen on the AIW when tuning TV signals as well. This way we can also get an idea of the quality of video the AIW will be capable of in general.

The first test on the HQV DVD is the Color Bar/Vertical Detail test. This basically tests how well the video processor tells if something is moving or not, to ensure proper deinterlacing. We found that ATI did slightly better than NVIDIA in this test, as there was some minor flickering that was evident on NVIDIA's side. ATI scored perfectly here. 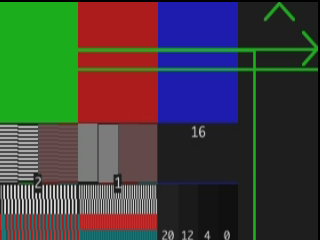