The new AMD technology refresh, now called AM2, will bring DDR2 memory to the Athlon64 on-processor memory controller. Many in the industry have speculated about the impact of this low latency memory controller on DDR2 performance, which to this point has suffered under the impact of the higher latency Intel Netburst architecture. We are looking forward to the opportunity to take a closer look at DDR2 performance on AM2 - which is everyone's big question.

Photos of the back of the new AM2 processor show how very close the new design is to the current Socket 940. 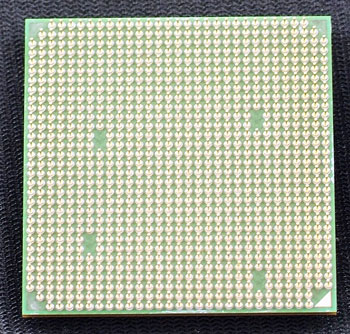 The AM2 940 and current Opteron 940 are so close in design; you have to conclude that AMD could have used the same socket design. But there are numerous electrical differences and different memory is required. AMD apparently used a revised Socket 940 to prevent any possibility that AM2 chips might get accidentally mounted in current Socket 940 motherboards. That is probably a very wise decision.