DFI NF4 SLI-DR Expert &ndash; Can the best get better? 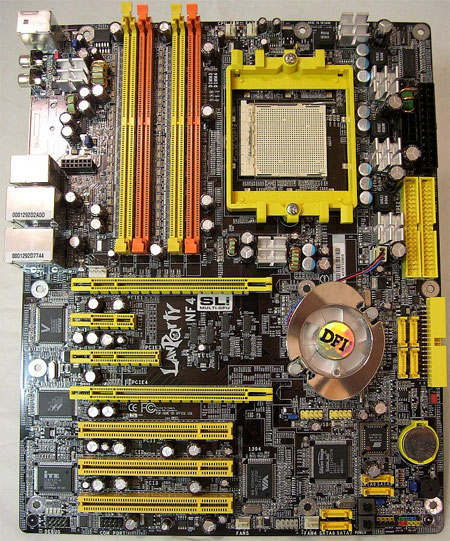 The SLI-DR Expert PCB is manufactured in DFI’s familiar black with UV reactive yellow color for the bulk of plastic components such as the PCI-e/PCI slots, IDE and Floppy connectors, and yellow and orange UV colors for the DIMM slots. The layout of components on this board is very good, with the IDE and Floppy connectors on the right side of the PCB, which generally works best in most cases. The trend recently has been to place floppy and/or an IDE at the bottom of the PCB, and it’s refreshing that DFI has shied away from this practice.

The original 4-pin Molex and the 4-pin P4 style connector have been replaced by an 8-pin 12V power connector placed next to the 24-pin ATX connector. During setup of the board, we came to realize that the PC Power and Cooling Turbo-Cool 510 SLI PSU on our review bench does not include this new style 12V plug, so we utilized the standard 4-pin 12V plug, which fit fine on one side of the 8-pin connector. We saw no ill effects on stability from using the 4-pin instead of an 8-pin connector. The 4-pin floppy-type connector for video remains above the 1st x16 PCI-E slot as was provided on the original SLI-DR.

The SATA 5, 6, 7 and 8 ports are controlled by the Silicon Image SIL 3114, which (to be honest) is a disappointment. With the SIL 3132 available, it would have made sense to include that SATAII controller, which would have given this board 8 SATAII channels and thus keeping this board future-proof and flexible. This omission is a hard one to figure out based on the many changes made on of this board, considering the current proliferation and wide availability of SATAII hard drives.

IEEE 1394 Firewire is controlled by the familiar VIA VT6307. Audio is provided by their Karajan 8 Channel audio card utilizing the AC97 codec, again the same setup as the previous generation. The board also boasts momentary switches for Power on and Reset like its previous version, along with the Vitesse and Marvel Gigabit Ethernet controllers.

The most obvious change is the 90 degrees counter-clockwise rotation of the CPU and memory. This layout was first seen on the DFI ATI based RDX200 CF-DR just recently introduced, and carried over to the Expert.

Compared to the original SLI-DR, the Expert includes some major changes in its design. In a conversation with OCZ Technology’s guru, Tony Leach, an expert in memory interfaces and BIOS, Tony pointed out: “The changes I know about fall mainly with memory drive strength. Engineer Oskar Wu has added even more resistors this time to allow near full drive from the memory controller. He also has routed the traces for the DIMMs over 4 layers to cut crosstalk to the bare minimum. DFI also use similar power regulation to the ATI reference boards, which I helped spec.” 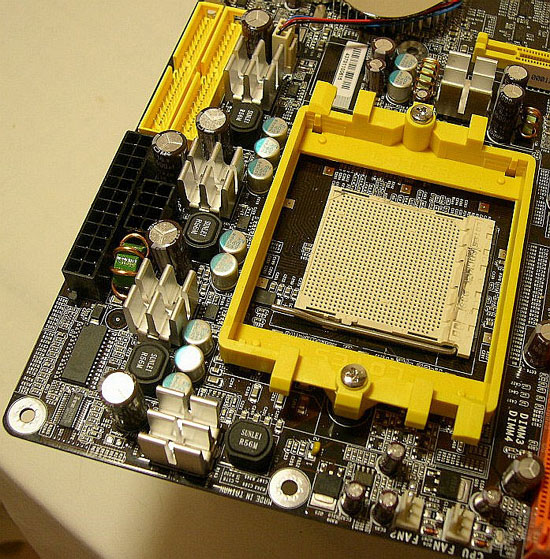 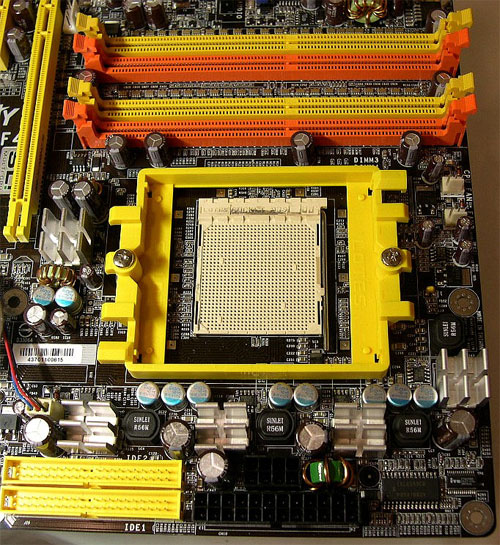 The CPU power section includes the superb Nichicon capacitors to complement DFI’s overall use of high quality Japanese capacitors throughout the board. The major change here was the move to a 4-phase PWM power section as has been used on Intel based P4 boards for a number of years. 4 Phase power, through its ability to provide clean stable power, is noted for providing increased CPU, and hence, system stability. As has been the norm in DFI’s current lineup, inclusion of heat sinks on all MOSFETs is a nice touch and very effective. 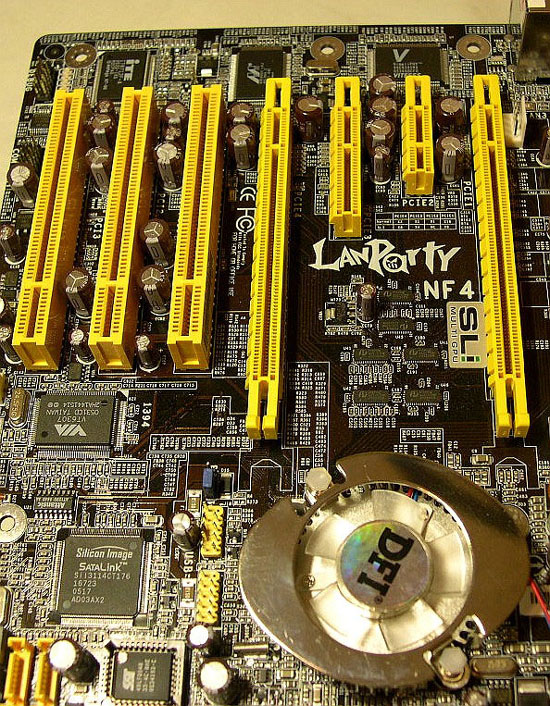 Another major change in the Expert board is its x16 PCI-E slots. They have been moved farther apart, which facilitates the use of improved cooling. Graphics card coolers such as those manufactured by Arctic Cooling and others, certain types of water blocks, and phase change evaporators were very difficult or impossible to use on the original DFI as there just wasn’t enough room to use them. The additional spacing opens up the ability for end-users to use alternative cooling methods.

The other change involves the elimination of the SLI jumper system from the original SLI-DR. The original jumper system was a bit of headache to perform and is now switched from within the BIOS.

The only criticism that currently remains involves the northbridge fan, which cannot be avoided based on the board’s layout. Long graphics cards such as the NVIDIA 6800Ultra and 7800GTX can contact the fan housing.

The fan itself is a magnetic levitation design and is quiet and effective, a nice carry-over from the original SLI-DR. 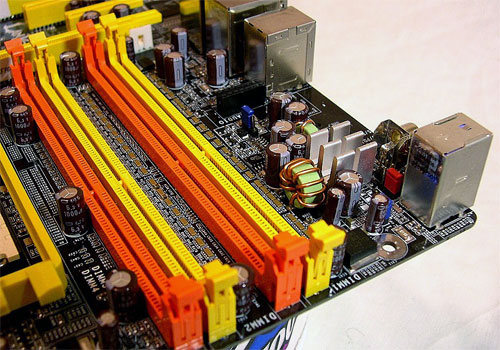 This view illustrates the power section of the memory subsystem. Of note here is the addition of an Inductor and several additional capacitors, again, to provide the utmost in stability. The most apparent change is the elimination of the previous generation’s vDIMM jumper that allowed an end-user to switch the power supply provided from the 3.3V line to the 5V line. This, of course, allowed you to have at your fingertips 4V+ to apply to your RAM modules, especially modules such as BH-5, which required it to run 260 MHz+ with tight timings. The option to use 4V+ remains with this revision, but it is now simply a matter of just adjusting the memory voltage in the BIOS.