by Wesley Fink on November 23, 2005 1:15 AM EST
74 Comments | Add A Comment
74 Comments + Add A
Comment
When the Asus A8R-MVP landed on our doorstep, we were frankly a bit disappointed. Here was the first Asus board built with the ATI Crossfire AMD chipset and the first board to market that uses the ULi M1575 south bridge instead. If you recall from our launch review of the M1575, this ULi south bridge fully supports SATA2 and provides competitive USB performance - removing the few nagging issues with the excellent ATI Crossfire AMD chipset.

So, why were we disappointed? We really hoped that Asus would deliver a super high-end board, much like the Asus A8N32-SLI deluxe 8-phase that we recently reviewed. That kind of board could clearly show what the Crossfire AMD chipset was really capable of doing. Instead, we had a competent-appearing mainstream board that will likely sell in the $100 to $125 price range. Our first thoughts, naturally, were "ho-hum", a solid but unspectacular Crossfire AMD.

We even talked with Asus about why they didn't lavish their attentions on the A8R-MVP, and we were given perfectly reasonable explanations. With Dual x16 NVIDIA now available, Asus really believed that the ATI Crossfire AMD was better positioned as a mainstream product, and Asus would likely give "top-end treatment" to the upcoming RD580 ATI Dual x16 Crossfire chipset for AMD. We couldn't argue with the Asus logic, but it did not stop our disappointment that maybe this board could have had it all for those looking for an ATI chipset solution for Athlon 64 Socket 939.

If we always went with our assumptions, there would be no reason at all to test motherboards, and thankfully, our first opinions are often proven wrong in the actual testing. As we began benchmarking the A8R-MVP, we realized that our assumptions were completely wrong and this board might prove to be the board many have been waiting for. It turns out that there is absolutely nothing missing from the feature set of the A8R-MVP except the high price, and we think that you will enjoy our journey with this board.

We also had a few shocks in other areas. Our first attempts at overclocking were pretty average, but as we persevered, we had another assumption shoved back in our face. 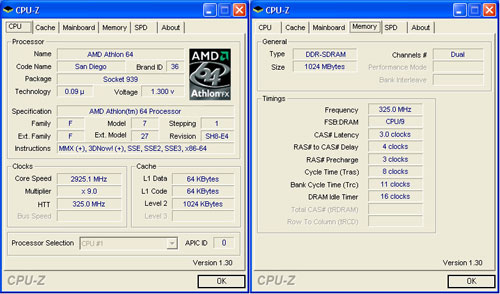 This isn't a mistake. This is a screen capture of the Asus A8R-MVP after running 2 days at 325x9 - the highest overclock that we have ever achieved with our standard OCZ PC3200 Platinum Rev.2 memory and our 4000+ CPU. We actually reached even higher overclocks, but 325 was completely stable with air cooling.

Now that you know that this average-priced motherboard turned out to be anything but average in performance, join us as we take a closer look at the motherboard that may turn out to be the value-priced rocket everyone is looking for.