by Tuan Nguyen on October 30, 2005 6:17 PM EST
11 Comments | Add A Comment
11 Comments + Add A
Comment
It's been roughly a quarter or so since the availability of NVIDIA's 7800GTX and already speculation is circulating online that NVIDIA is preparing a new launch during the month of November. While we can confirm that NVIDIA will indeed be announcing something new, we can't say exactly when they will do it, but it'll occur in November.

What we have discovered, however, thanks to some clever users, is that NVIDIA may potentially announce two products: the GeForce 7800GS and a 512MB version of the current GeForce 7800GTX. From the evidence, we believe that NVIDIA plans to introduce a new entry-level model and to accompany the top-end 7800GTX 512MB to give consumers more choices, both in features and in price.

Our industry sources claim that NVIDIA is positioning the new GS somewhere below the current 7800GT. Traditionally, NVIDIA's products that carry the GT suffix tend to be a mid-priced product that carries a significant portion of the top performing variant. GT products are also well received by the community as good value for the money. However, there is a large majority of users out there who don't play the most recent games frequently and spend most of their computer time doing other things that don't demand leading-edge graphics performance. We can only assume now that GS products are aimed at a more mainstream audience - and it's a good thing.

Information about the new product - as well as many other products - is actually embedded in NVIDIA's current released drivers. Using a common developer's tool such as an executable disassembler, one can browse through the information that resides in the DLL file responsible for the customized NVIDIA display control panel.

Download the latest ForceWare 81.87 BETA drivers from NVIDIA (a link to the driver is available directly from NVIDIA's website). Regardless of whether or not you have a NVIDIA based card, this will extract the drivers into a folder called "NVIDIA". Finally, you'll want to download and install a program called PE Explorer.

Open a command prompt by clicking on your Start menu > Run > type " cmd" and go to the location of the NvCpl.dl_ file. Once there, type "expand NvCpl.dl_ -r". This will create the actual nvcpl.dll binary library.

Launch PE Explorer and open nvcpl.dll. After it has loaded successfully, click Tools > Disassembler. After a few moments, a new window will open with a long list of strings. Perform a search for 7800_GS and you should see the following: 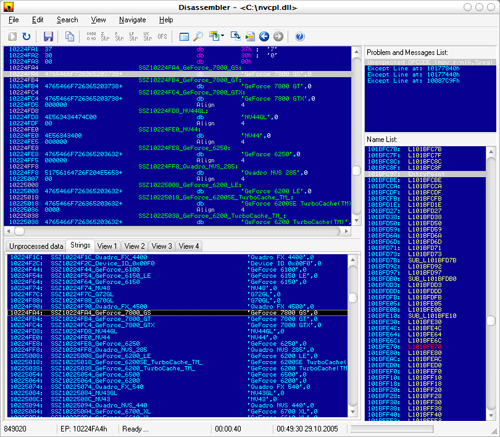 Interestingly enough, there are quite a few other mystery products in the DLL, including GeForce 6150, 6250 and 6700. We've already heard rumors of most of these cards as well, but we do not have enough information at this time to comment on them.

Now that the existence of the new product is confirmed, the only thing left to do is to wait for NVIDIA's launch. Rest assured, once we have the full products in our labs, you will be the first to know of its details.