OCZ is a well-known brand of enthusiast products - memory, power supplies, flash memory and more. In the past two years, OCZ was normally at or near the top of roundups and reviews of high-performance memory. After struggling several years ago, OCZ fought back and, today, is regarded as top-quality memory with some of the best Customer Service in the business. 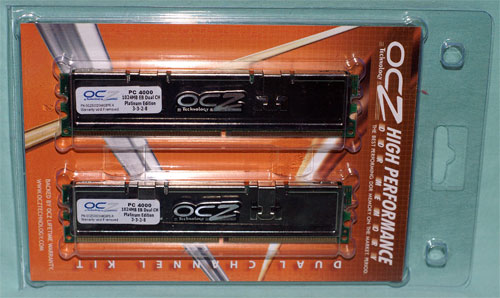 The OCZ trademark chrome heatspreaders announce the new DDR500 as Platinum Edition memory. In this case, the 1GB DIMMs are rated EB, or Enhanced Bandwidth. A DDR500 1GB DIMM rated at 3-3-2-8 timings certainly deserves the EB name, but in fact, the 1GB DIMMs perform even better.


We also see a low voltage requirement with the OCZ 2 GB kit - very similar to the voltage specified by Corsair for their 2GB kit.

OCZ did not reveal to us the manufacturer of the memory chips used in their 500EB 1GB DIMMs. There was also nothing on the DIMMs to help us in identifying the memory manufacturer. However, after running our full benchmarks on the OCZ PC4000 EB Platinum, we would be very surprised if the memory is other than Infineon. Performance from DDR400 to DDR480 is virtually identical to Corsair even down to the low voltage requirement, but performance continues on to DDR550 while still only needing the same very low 2.7V memory voltage.

Like the Corsair, this is a memory that does not need a special board with super high voltages to get the best from the memory. You can get the best from these 1GB with almost any decent motherboard, since we never needed more than 2.7V for stable performance at any speed.

We would really be interested in exactly which Infineon chips are used in this OCZ memory. It is either a slightly different chip than the Corsair, since it goes much higher in overclocking, or OCZ is doing some interesting binning of Infineon chips - something that would also not surprise us.