Antialiasing is becoming more and more important as graphics cards get faster. With the 7800 GTX (and the X1800 XT when it comes along), there are very few monitors that can really stress the fill rate potential of these cards. Not everyone has 30" Apple Cinema Displays, and even at resolutions of 1600x1200 we see CPU limitedness start to become a factor. With many 1600x1200 flat panels out there on the market, this "monitor limitedness" will only get worse and worse as graphics cards continue to improve at a significantly faster rate than display technology. Quality enhancing features will get more and more attention in the meantime, and more power can be spent on enhancing a game rather than just rendering it. Thus more focus has recently been put into antialiasing algorithms.

Multisample AA (MSAA) has been the predominant method of antialiasing for quite a few years now, but it is not perfect. MSAA only works around polygon edges by smoothing lines when the area covered by one pixel falls over multiple triangles. SSAA oversamples everything at every pixel and is traditionally implemented by rendering a scene at a larger resolution and then down-sampling the image to fit the display. Lots of power is wasted with SSAA in areas that are covered by the same color, so MSAA wins out in performance while sacrificing a bit of quality.

One of the major down sides of MSAA is its inability to antialias the interior of polygons mapped with a texture that includes transparency. Things like wires, fences, and foliage are often rendered with huge triangles and transparent texture maps. Since MSAA only works on polygon edges, the areas between transparent and opaque parts inside these large polygons can look very jagged. The only way to combat this is to take multiple texture samples per pixel within the same polygon. This can be done by performing multiple texture lookups per pixel rather than simply rendering the scene at a huge resolution.

ATI is including a feature called Adaptive Antialiasing in the Catalyst release that comes along with the X1000 series. Adaptive AA is functionally similar to NVIDIA's Transparency AA. Rather than just doing multi-sample (MSAA), ATI is able to adaptively take multiple texture samples per pixel in areas that would benefit from including additional texture samples (essentially resulting in a combination of MSAA and SSAA where needed). Depending on where ATI determines it is necessary to perform multiple texture samples, poorly designed or easily aliased textures can benefit in addition to those that include transparency.

Unlike NVIDIA's Transparency AA, ATI's Adaptive AA will be available to all ATI hardware owners. How's that for value-add! This could be a very nice thing for X800/X850 series owners stuck with 1280x1024 panels. Apparently ATI has been tweaking this technology for a few years now, but held off on its introduction until this launch. The use of this feature on most older hardware won't be widespread as performance will degrade too much. In these cases, increasing resolution is almost always more effective than increasing AA quality. Here's a look at the Adaptive AA as compared to Transparency AA: 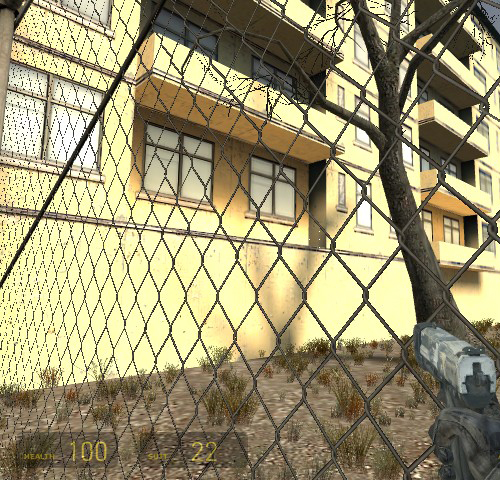 Mouse over to cycle images

ATI has also improved their hardware to the point where they can support MSAA on multiple render target (MRT) and fp16 render targets. No other hardware out now can perform MSAA in games that use these techniques. ATI is touting AA on fp16 targets as the ability to perform AA on HDR enabled games. While it is true that having front to back input and output textures and render targets composed of fp16 information is a very high quality way of doing HDR, it is also very memory bandwidth intensive and requires a lot of GPU horsepower (especially since there are no texture compression techniques that work on fp16 textures). Certainly support for MSAA on floating point and MRT output is a welcome addition to the feature set, but we don't currently have a good way to test the performance or quality of this feature as there aren't any good applications around to test them.

Continuing down the path to high quality AA, ATI has improved the sub-pixel accuracy of their antialiasing hardware. Rather than being limited to selecting samples on an 8x8 grid, ATI is now able to work with select samples from a 16x16 grid. Moving up from 64 to 256 potential sub-pixels per pixel, ATI has improved the accuracy of their AA algorithm. This accuracy improvement may not be directly noticeable, but this enhancement will also improve the quality of dense AA methods like CrossFire's SuperAA technology. Workstation users will also benefit as this will likely translate to improved point and line antialiasing quality.

The one thing I would ask for from ATI is the ability to turn off "gamma-correct" AA. Such methods only shift inaccuracies between overly dark and overly bright pixels. Consistent results would only be possible if all displays were the same. Since they are not, it's really a six of one half-dozen of the other choice. Putting the decision in the user's hands as to what looks better is always our favored suggestion.

As if all of these enhancements weren't enough to top off ATI's already industry leading antialiasing (NVIDIA's grid aligned sample patterns just can't touch ATI's fully programmable sample patterns in quality), ATI has also vastly improved antialiasing performance with the X1000 generation of hardware. Neither NVIDIA nor previous generation ATI hardware can match the minimal performance hit the X1000 series incurs when enabling standard AA. The performance we see is likely due to a combination of the improvements made to the AA hardware itself along side enhancements to the memory architecture that allow for higher bandwidth and the prioritization of data moving on the ring bus.
High Quality AF Test Setup and Power Performance
Tweet
PRINT THIS ARTICLE
POST A COMMENT