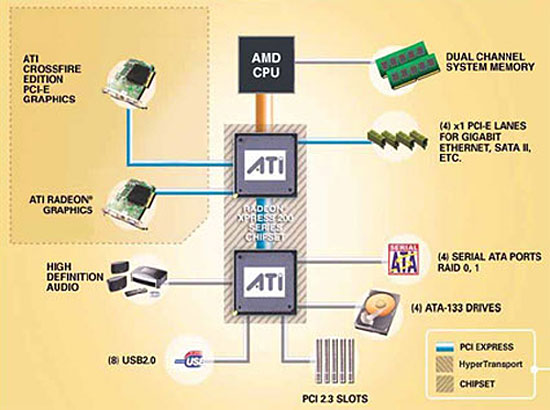 Last fall's introduction of the ATI AMD chipsets featured the SB400 south bridge. The recent introductions combine the north bridge with the ATI SB450 south bridge, which features High Definition Azalia audio for both AMD and Intel. This was the first chipset to bring High Definition audio to AMD. Recently, NVIDIA introduced the GeForce 6100 integrated graphic solution that also brings HD audio to AMD. However, NVIDIA's top nForce4 chipset, used in most enthusiast motherboards, does not support HD audio.

The SB 450 also supports PCI-e Gigabit LAN, standard SATA 150, and has improved USB burst performance compared to the earlier SB400 chipset. We will see full SATA 2 support and a completely reworked USB controller in the SB600, which will launch in the 4th quarter of this year.

The various ATI Radeon Xpress 200 north bridges can also be combined with ULi south bridges. The current ULi 1573 provides all the features of the ATI SB450 except integrated Gigabit Ethernet. This includes High Definition Azalia audio. Gigabit Ethernet can be added to the 1573 as an external chip. The ULi 1573 also supports NCQ hard drives, which are not supported on the SB450. 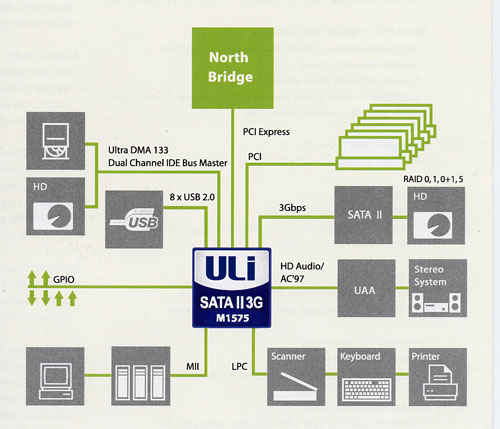 ULi has recently introduced the M1675 chipset, which adds SATA II 3Gb/sec to the feature set. The M1573/M1575 family are particularly interesting, since both south bridges are pin-compatible - making the upgrade to M1575 an easy task when the south bridge is finally available to manufacturers.