Intel Motherboards: Can a Diamond beat a Royal Flush? 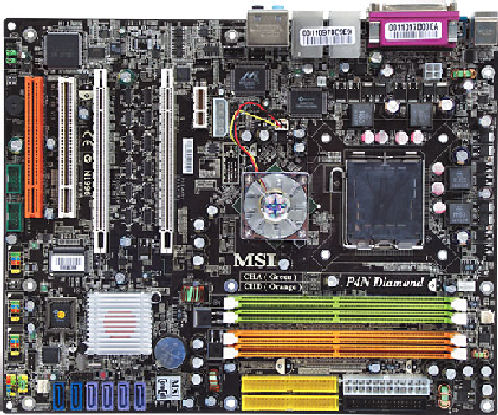 MSI put considerable thought into the layout of the board given the vast number of features included. The board is lacking most major clearance issues and is very easy to install. In fact, the board feels like it has a lot more space than it actually does and even the memory modules can be installed and removed easily with the graphics card in place.

Although I disagree with the choice of colors for the peripheral connections, as they ruin an otherwise sharp looking board, they do have their place for identifying ports quickly and properly. However, in my opinion, MSI did err with the DIMM module slots' color coordination. It would have been nice to separate the dual channel slot colors instead of relying on the standard DIMM one through four labels - you would instinctively know that by placing memory in the green slots, it would equate to dual channel operation.

The power plug placement favors standard ATX case design and except for running a four-pin 5v lead to the auxiliary power plug above the PCIe x1 slot, the power cable management is very good. The floppy and IDE connectors are conveniently located along the back of the board and allow usage of ribbon or rounded cables.

The SPP Northbridge is actively cooled, and based upon how hot the nForce4 SLI Intel Edition chipset runs, this type of additional cooling is required. However, upon installing the stock Intel heatsink, it was basically touching the SPP fan unit. It appears that there was ample room for the north bridge to have been moved slightly to the left without interfering with the PCI Express x1 slot, which would have allowed a greater variety of cooling solutions. The MCP Southbridge heatsink is a low profile design that features a copper core to assist in cooling and will not interfere with the longer video cards.

Another feature that worked flawlessly was the CMOS reset button located next to SATA connector numbers three and four. This is an idea that all motherboard manufacturers should incorporate on their boards, as moving a jumper to clear the CMOS can be a bit cumbersome. (Jumpers are so 1990s....)

Speaking of which, all of the SATA ports are located in a row along the back of the board and feature the new clamp and latch design. Unfortunately, MSI did not include the new cable design in their kit. However, this design could pose potential issues with certain ATX case designs that have the drive bays nudging along the perimeter of the board. Another issue is that the connectors are difficult to use when utilizing an SLI setup. The image shown can best describe the situation as the bottom drive had to be moved due to the SLI configuration and you can see that cable management could be an issue. 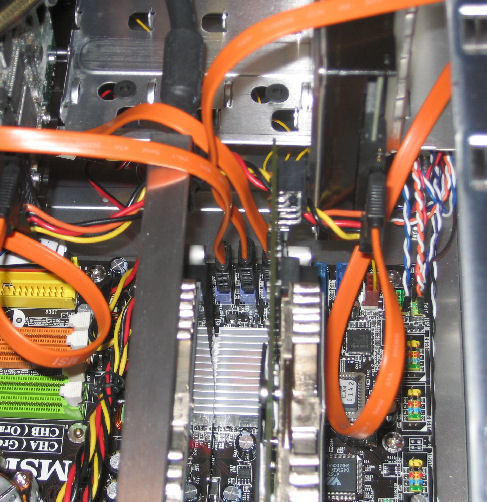 The BIOS options are extensive on the P4N Diamond, with memory voltage to 2.4V, and a full range of chipset, bus, and vCore voltage adjustments. Memory ratios are handled like other nForce4 SLI Intel Edition boards in that the number of memory dividers is so copious that you enter a target memory clock and the BIOS will select the appropriate memory divider to produce a setting as near as possible to the requested value. MSI also includes a unique feature in their bios that allows you to overclock the core and memory on NV4X video cards up to 15%.

MSI installs their CoreCell chip that allows dynamic overclocking based on CPU loads. The CoreCell can detect CPU speeds within a microsecond depending upon changes in the CPU workload.

MSI also ships their CoreCenter software package, which allows users to configure and adjust the front side bus speed and change various system voltage settings. It will not allow changes to the CPU multiplier as this is only allowed within the BIOS. The utility will also allow you to set various temperature and fan speed based warnings.

MSI also offers a unique customer service option for owners of their Diamond series boards. A membership card is included in the box that allows access to a separate forum on the MSI website that provides dedicated MSI technical service for the members.