And now, some DVD-R media…

The DVR-110D performed better on the AN31 media, writing at the full 4x speeds at which the media was rated. We did not expect the DVR-110D to exceed this speed due to the lower quality of the media. The complete write took a few seconds over 15 minutes at 4x speeds, while reading back the media took 6 minutes and 37 in change.

“Here we go, back to some high quality Verbatim media that took a successful write and helped the drive produce a successful read of the disc, finishing off at 16x write speeds.” That’s what we said in our look at the PX-740A, but we can’t say the same for the DVR-110D. For some reason, this drive has issues with media between the 3.5-4GB range. The write just gave up around 3.8GB and we had to stop it manually. Of course, we tried another disc, but it gave us the same results.

For giggles, we read back this disc on the drive that showed a flawless read up to the point that it had given up the read. During our PlexTools scan, we noticed a huge leap in PI errors towards the “end” of the write. You can see the screenshot by downloading the package at the link below.

By reader demand, we are introducing Taiyo Yuden media into our testing, beginning with DVD-R media. Take a look at how the DVR-110D performed in it. 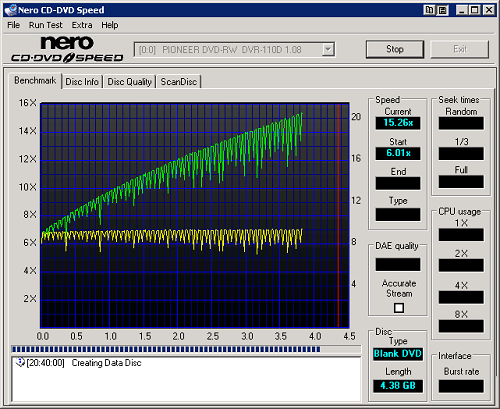 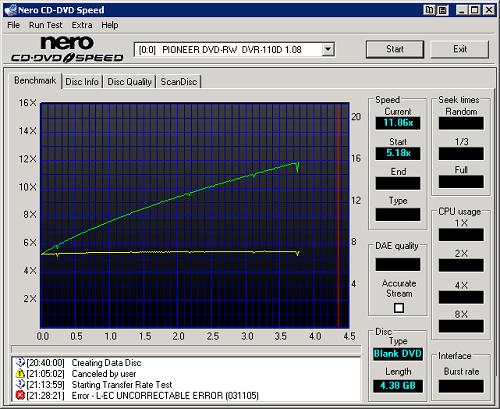 Well, our first time around with this media did not prove to be such a great experience. Like the MCC 03RG20 media, the write could not get past the 3.8GB mark and this disc was, of course, unreadable past that point as well. Hopefully, Pioneer can fix this in a firmware update, since Taiyo Yuden is rated as such a high quality media.

The screenshots of Nero’s CD-DVD Speed and Plextor’s Plextools can be downloaded here.