Since your data is stored on a volatile medium with the i-RAM, a loss of power could mean that everything stored on the card would be erased with no hopes for recovery.  While a lot of users may keep their computers on 24/7, there are always occasional power outages that would spell certain doom for i-RAM owners. In order to combat this possibility, Gigabyte outfitted the i-RAM with its own rechargeable battery pack. 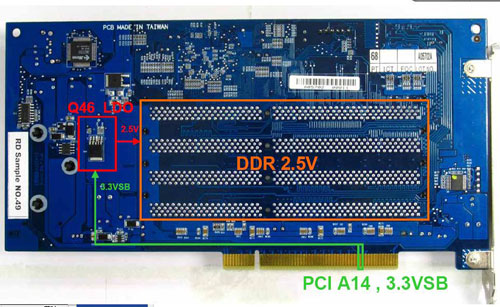 The battery pack takes 6 hours to charge completely and charges using the 3.3V power lines on its PCI connector.  With a full charge, the i-RAM is supposed to be able to keep the i-RAM's data safe for up to 16 hours.   Luckily, in most situations, the i-RAM will simply keep itself powered from the PCI slot.  As long as your power supply is still plugged in and turned on, regardless of whether or not your system is running, shut down or in standby mode, the i-RAM will still be powered by the 3.3V line feeding it from the PCI slot.

There are only three conditions where the i-RAM runs off of battery power:

For whatever reason, unplugging the i-RAM from the PCI slot causes its power consumption to go up considerably, and will actually drain its battery a lot quicker than the specified 16 hours.  We originally did this to test how long the i-RAM would last on battery power, but then were later told by Gigabyte not to do this because it puts the i-RAM in a state of accelerated battery consumption.

For the most part, the i-RAM will always be powered.  Your data is only at risk if you have a long-term power outage or you physically remove the i-RAM card.

If you run out of battery power, you will lose all data and the i-RAM will stop appearing as a drive letter in Windows as soon as you power it back up.  You'll have to re-create the partition data and copy/install all of your files and programs over again. 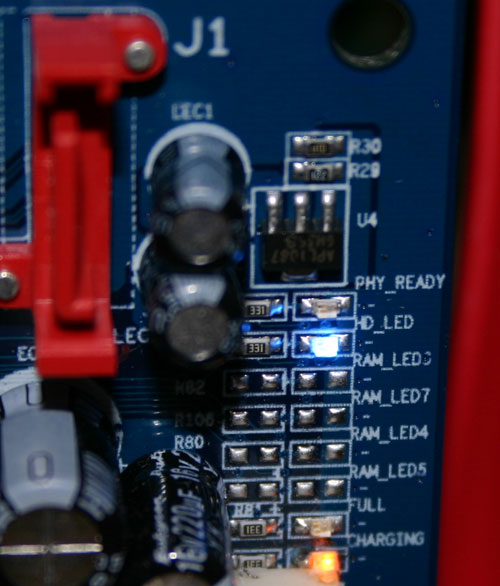 The PHY_READY indicator simply lets you know if the Xilinx FPGA and the card are working properly.  The HD_LED is an activity indicator that is illuminated whenever you access the i-RAM.  The Full indicator turns green when the battery is fully charged, and the Charging indicator is lit amber when the battery is charging.  When the i-RAM is running on battery power, none of the LEDs are illuminated.  It would be nice if there was some way of knowing how much battery power is remaining on the i-RAM, for those rare situations where the i-RAM isn't being charged.  We have asked Gigabyte for some sort of battery life indicator in a future version of the i-RAM.