We haven't updated our AMD roadmap for a few months, in part due to overlapping NDAs and product launches. Unfortunately we are just about to go under NDA for AMD's next low clock X2 processor - but rather than postpone another roadmap we decided to carry on just without that information. Our last detailed AMD roadmap was actually back in December, and we have quite a bit of new information to cover. We'll focus primarily on the upcoming parts, which will be highlighted in red in our tables, but we'll also list details on many of the currently shipping parts. Let's start with the desktop sector.

The big news of course is the upcoming transition from socket 939 to socket M2. M2 will have 940 pins, and while the actual layout of motherboards with the new socket will be very similar to socket 939, processors will obviously not be pin compatible. The same goes for current socket 940 processors: they won't work or fit in socket M2. That makes sense, considering that M2 will require the use of DDR2 memory. The similarity in layout will allow motherboard makers to quickly adapt 939 designs to M2, however.

Initially slated to support up to DDR2-667, the socket M2 processors will launch in the second quarter of 2006. Codenamed Orleans for the single core processors, the roadmaps include few details on the clock speeds or cache amounts of the new parts. Without speculating too much, we would assume that the specifications will be the same as equivalent 939 processors, but we could be wrong. Another possibility is that the DDR2 parts will outperform the socket 939 parts, allowing AMD to modify their names (again). Either option seems equally likely, and we wouldn't be surprised to see the 4000+ M2 ship as a 2.6 GHz 512K part, as that would allow the use of a single design for the three listed chips. 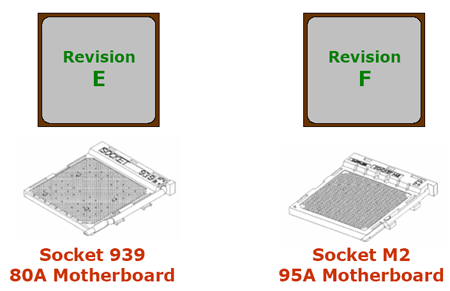 Processors running on the new M2 socket are dubbed Revision "F". Revision "F" processors carry all the features of existing "E" CPUs, but along with the new socket comes some significant changes in power. For example, a typical Revision "E" San Diego Athlon 64 utilizes 80 amps with a maximum TDP around 90W. The new Revision "F" CPUs will use 95 amps instead. However, although the processors require a bump in the current, the power remains the same. Unfortunately, expect massive increases in TDP. From the roadmap we expect the FX M2 processors to have a max TDP of 125W, 110W for dual core and 104W for single core. Revision "F" implements a new Bi-Directional PROCHOT so that the motherboard can throttle the processor dynamically, but the CPU can also override and throttle itself if necessary. 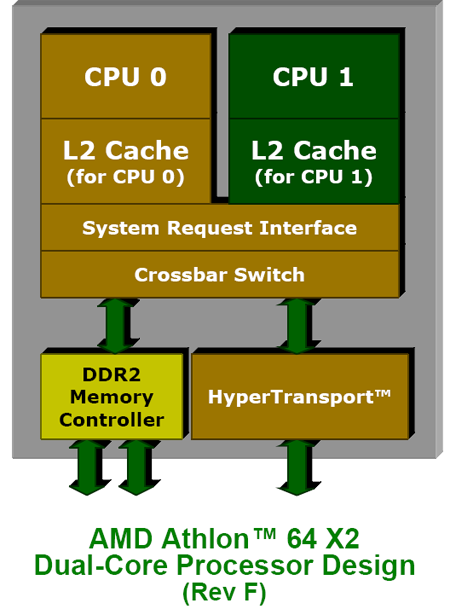