Kingston was displaying a full line of their latest Hyper-X DDR2 rated at DDR2-750. This included 256MB, 512MB, and 1GB DIMMs - with matched pairs to 2GB.

Other memory vendors like Patriot, Kingmax, and PQI were displaying their latest official DDR2-800 or DDR2-667 modules. It seemed that everywhere we turned, there were faster DDR2 modules on display.

TwinMOS is better known to readers in Europe and Asia than to US buyers, but they are a huge player in the global memory market. 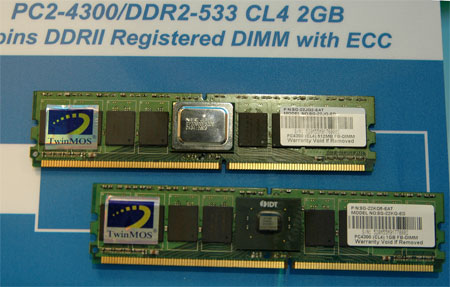 We were excited to see TwinMOS displaying 2GB ECC DDR2 modules. While the DIMMs are only rated at DDR2-533 currently, faster 2GB DIMMs will likely appear in the future. This means that you can finally pair the new dual-core processors with 8GB of DDR2 ECC memory in the 4 available DIMM slots. Those building servers supporting DDR2 will already be calculating capacities with these new reasonably-priced 2GB DIMMs.