For Alder Lake, we start off with a comparison of the Golden Cove cores, both in DDR5 as well as DDR4 variants. We’re pitting them as direct comparison against Rocket Lake’s Cypress Cove cores, as well as AMD’s Zen3. 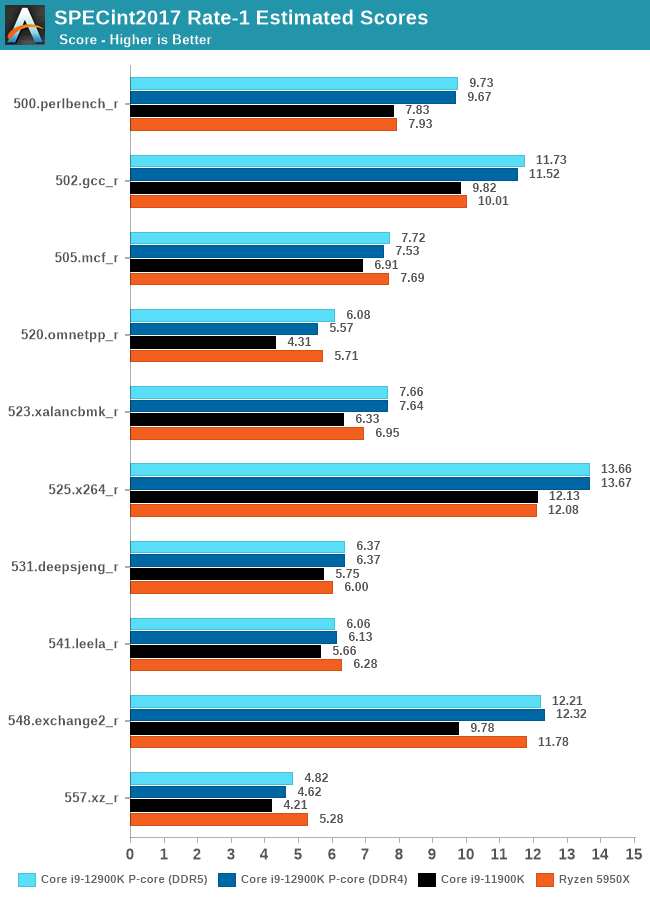 Starting off in SPECint2017, the first thing I’d say is that for single-thread workloads, it seems that DDR5 doesn’t showcase any major improvements over DDR4. The biggest increase for the Golden Cove cores are in 520.omnetpp_r at 9.2% - the workload is defined by sparse memory accessing in a parallel way, so DDR5’s doubled up channel count here is likely what’s affecting the test the most.

Comparing the DDR5 results against RKL’s WLC cores, ADL’s GLC showcases some large advantages in several workloads: 24% in perlbench, +29% in omnetpp, +21% in xalancbmk, and +26% in exchange2 – all of the workloads here are likely boosted by the new core’s larger out of order window which has grown to up to 512 instructions. Perlbench is more heavily instruction pressure biased, at least compared to other workloads in the suite, so the new 6-wide decoder also likely is a big reason we see such a large increase.

The smallest increases are in mcf, which is more pure memory latency bound, and deepsjeng and leela, the latter which is particularly branch mispredict heavy. Whilst Golden Cove improves its branch predictors, the core also had to add an additional cycle of misprediction penalty, so the relative smaller increases here make sense with that as a context. 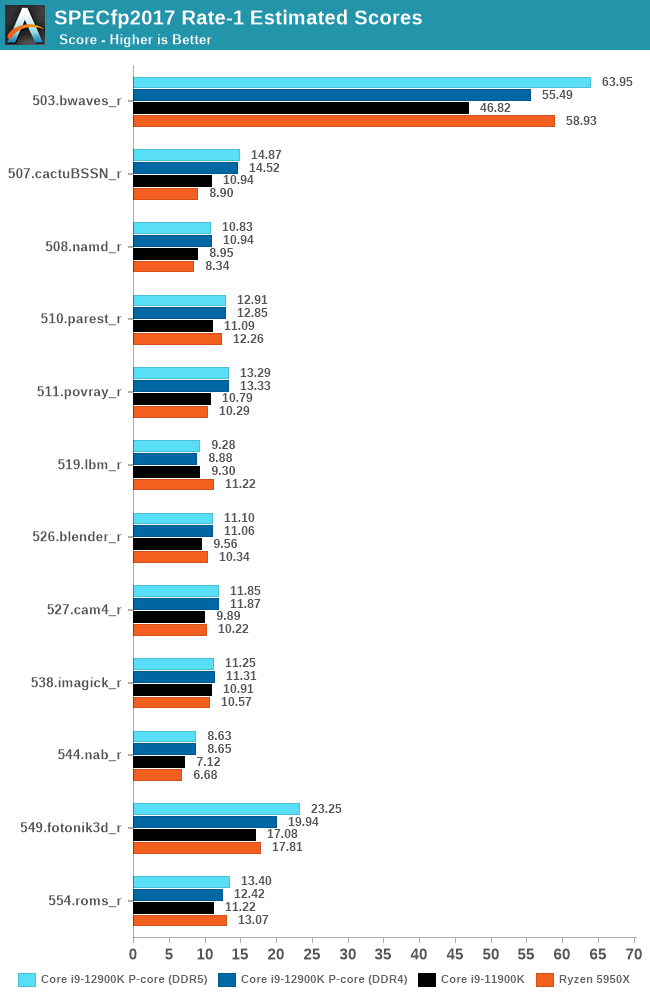 In the FP suite, the DDR5 results have a few larger outliers compared to the DDR4 set, bwaves and fotonik3d showcase +15% and +17% just due to the memory change, which is no surprise given both workloads extremely heavy memory bandwidth characteristic.

Compared to RKL, ADL showcases also some very large gains in some of the workloads, +33% in cactuBBSN, +24% in povray. The latter is a surprise to me as it should be a more execution-bound workload, so maybe the new added FADD units of the cores are coming into play here.

We’ve had not too much time to test out the Gracemont cores in isolation, but we are able to showcase some results. This set here is done on native Linux rather than WSL due to affinity issues on Windows, the results are within margin of error between the platforms, however there are a few % points outliers on the FP suite. Still, comparing the P to E-cores are in apples-to-apples conditions in these set of graphs: 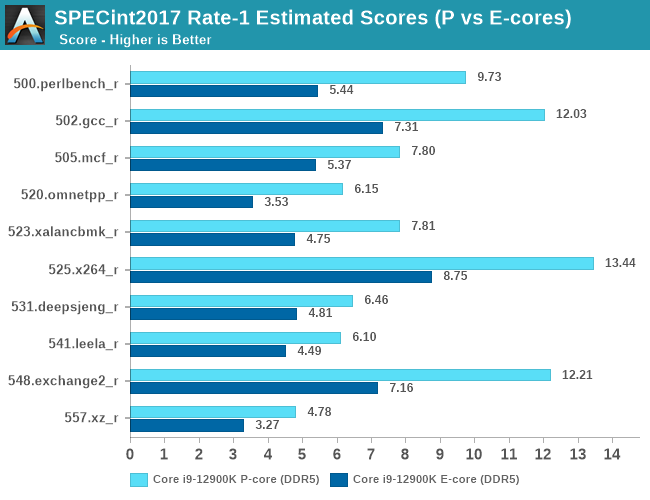 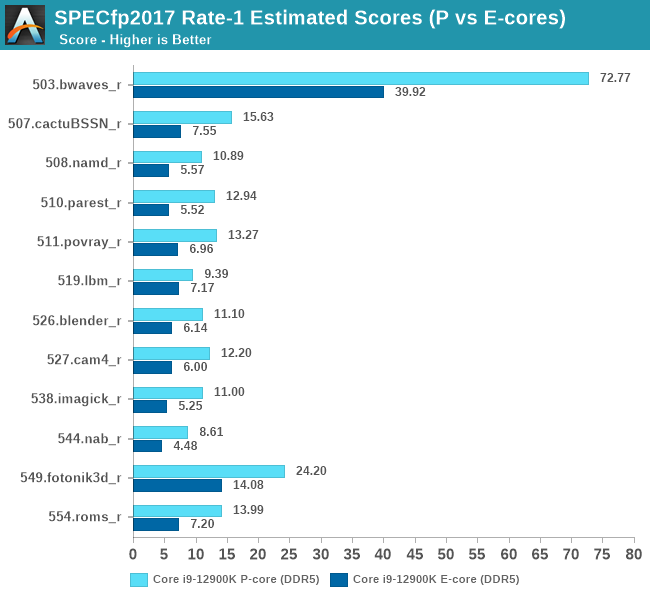 In the aggregate scores, an E-core is roughly 54-64% of a P-core, however this percentage can go as high as 65-73%. Given the die size differences between the two microarchitectures, and the fact that in multi-threaded scenarios the P-cores would normally have to clock down anyway because of power limits, it’s pretty evident how Intel’s setup with efficiency and density cores allows for much higher performance within a given die size and power envelope.

In SPEC, in terms of package power, the P-cores averaged 25.3W in the integer suite and 29.2W in the FP suite, in contrast to respectively 10.7W and 11.5W for the E-cores, both under single-threaded scenarios. Idle package power ran in at 1.9W. 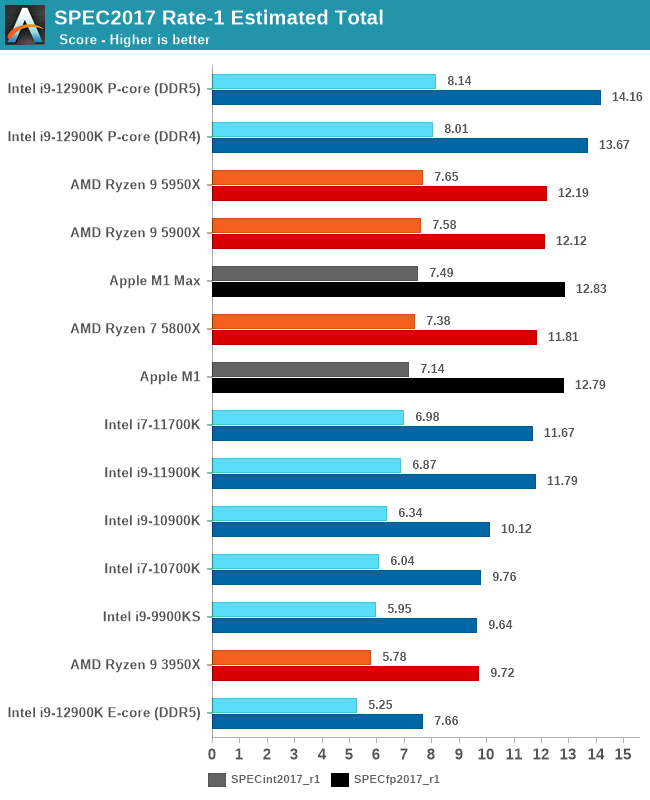 Alder Lake and the Golden Cove cores are able to reclaim the single-threaded performance crown from AMD and Apple. The increases over Rocket Lake come in at +18-20%, and Intel’s advantage over AMD is now at 6.4% and 16.1% depending on the suite, maybe closer than what Intel would have liked given V-cache variants of Zen3 are just a few months away.

Again, the E-core performance of ADL is impressive, while not extraordinary ahead in the FP suite, they can match the performance of some middle-stack Zen2 CPUs from only a couple of years ago in the integer suite.