The new M1 Pro and M1 Max chips are designs that we’ve been waiting for over a year now, ever since Apple had announced the M1 and M1-powered devices. The M1 was a very straightforward jump from a mobile platform to a laptop/desktop platform, but it was undeniably a chip that was oriented towards much lower power devices, with thermal limits. The M1 impressed in single-threaded performance, but still clearly lagged behind the competition in overall performance.

The M1 Pro and M1 Max change the narrative completely – these designs feel like truly SoCs that have been made with power users in mind, with Apple increasing the performance metrics in all vectors. We expected large performance jumps, but we didn’t expect the some of the monstrous increases that the new chips are able to achieve.

On the CPU side, doubling up on the performance cores is an evident way to increase performance – the competition also does so with some of their designs. How Apple does it differently, is that it not only scaled the CPU cores, but everything surrounding them. It’s not just 4 additional performance cores, it’s a whole new performance cluster with its own L2. On the memory side, Apple has scaled its memory subsystem to never before seen dimensions, and this allows the M1 Pro & Max to achieve performance figures that simply weren’t even considered possible in a laptop chip. The chips here aren’t only able to outclass any competitor laptop design, but also competes against the best desktop systems out there, you’d have to bring out server-class hardware to get ahead of the M1 Max – it’s just generally absurd. 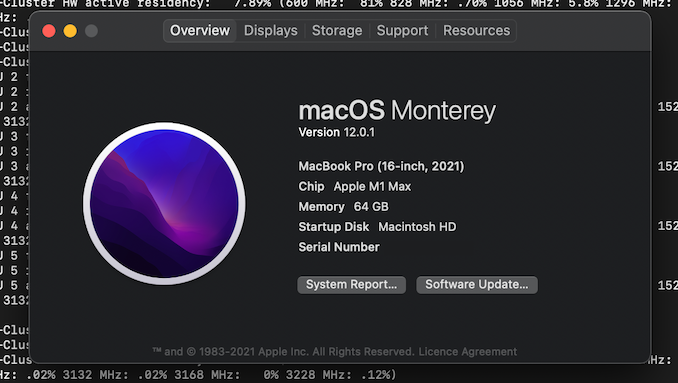 On the GPU side of things, Apple’s gains are also straightforward. The M1 Pro is essentially 2x the M1, and the M1 Max is 4x the M1 in terms of performance. Games are still in a very weird place for macOS and the ecosystem, maybe it’s a chicken-and-egg situation, maybe gaming is still something of a niche that will take a long time to see make use of the performance the new chips are able to provide in terms of GPU. What’s clearer, is that the new GPU does allow immense leaps in performance for content creation and productivity workloads which rely on GPU acceleration.

To further improve content creation, the new media engine is a key feature of the chip. Particularly video editors working with ProRes or ProRes RAW, will see a many-fold improvement in their workflow as the new chips can handle the formats like a breeze – this along is likely going to have many users of that professional background quickly adopt the new MacBook Pro’s.

For others, it seems that Apple knows the typical MacBook Pro power users, and has designed the silicon around the use-cases in which Macs do shine. The combination of raw performance, unique acceleration, as well as sheer power efficiency, is something that you just cannot find in any other platform right now, likely making the new MacBook Pro’s not just the best laptops, but outright the very best devices for the task.