The performance of the G-DRIVE SSD and ArmorLock SSD in various real-world access traces as well as synthetic workloads was brought out in the preceding sections. We also looked at the performance consistency for these cases. Power users may also be interested in performance consistency under worst-case conditions, as well as drive power consumption. The latter is also important when used with battery powered devices such as notebooks and smartphones. Pricing is also an important aspect. We analyze each of these in detail below.

Our Sequential Writes Performance Consistency Test configures the device as a raw physical disk (after deleting configured volumes). A fio workload is set up to write sequential data to the raw drive with a block size of 128K and iodepth of 32 to cover 90% of the drive capacity. The internal temperature is recorded (when supported by the drive) at either end of the workload, while the instantaneous write data rate and cumulative total write data amount are recorded at 1-second intervals.

Both drives start off around 1000 MBps in this workload, but move lower after running out of SLC cache. For the G-DRIVE SSD, this is after 30 seconds approximately (pointing to a SLC cache of around 29GB). In the ArmorLock case, the SLC cache sustains for around 5 additional seconds, with a SLC cache of around 35GB. The direct-to-TLC write numbers are around 875 MBps for the ArmorLock SSD and 690 MBps for the G-DRIVE SSD.

The addition of a Bluetooth radio and a DRAM-enabled internal SSD make the ArmorLock SSD consume between 2.5W and 6.43W during the active period. In contrast, the G-DRIVE SSD lands between 2.25W and 5.17W. The ArmorLock also never went to a low-power mode in our test, with the minimum power number clocking in at 1.71W. On the other hand, the G-DRIVE SSD exited active power state (2.25W) to end up at 0.43W after around 20 minutes of idling.

Evaluating the G-DRIVE SSD and G-DRIVE ArmorLock SSD provided interesting insights into how portable SSDs can be tweaked for different use-cases. The G-DRIVE SSD caters to the average consumer in need for a rugged portable drive. Due to the DRAM-less nature of the internal drive, it is the more power efficient of the two while sacrificing very little in terms of performance for DAS workloads. On the other hand, the ArmorLock SSD with its Bluetooth radio and DRAM-equipped SSD consumes more power and delivers better performance for typical DAS usage in its target market. However, the performance advantage evaporates when subject to traditional SSD workloads such as PCMark 10's full system drive evaluation routine. The absence of S.M.A.R.T passthrough and TRIM support is still a concern - hopefully, WD will be able to address that in a future firmware update. 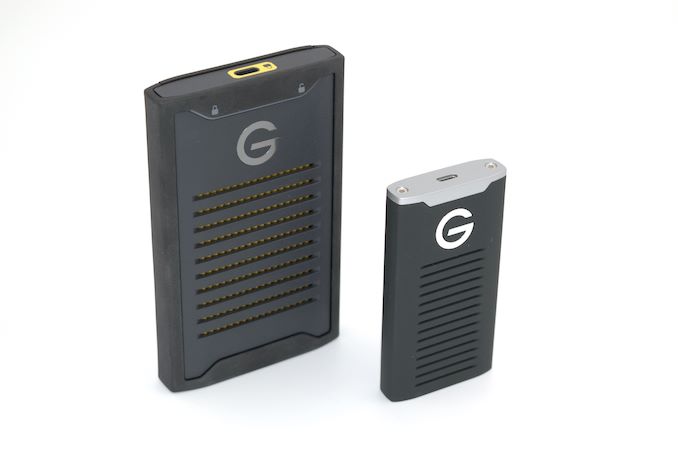 The ArmorLock SSD is still miles ahead of the competition in terms of performance and value - offering free features that are subscription-only from the competition. The open-sourcing of the protocol and the ability to provide app and firmware updates in the field ensure that the drive is protected against any weaknesses that might arise in the key-exchange process. The app itself is quite simple and intuitive to use, and the management features cater to different security requirements. The product is targeted towards content creators, studios, and business professionals, as well as IT managers in the finance, legal, healthcare, and government industries. The lack of FIPS certification may be a showstopper for some of the applications. However, significantly lower price for pretty much the same feature set as other FIPS-certified BT-enabled secure drives can make many in the target market happy.

The SanDisk Professional G-DRIVE SSD, on the other hand, gives very little cause for nit-picking. While performance may not be as good as, say, the SanDisk Extreme PRO USB 3.2 Gen 2 SSD (available for around $330), it more than makes up for it in terms of ruggedness, build quality, and thermal performance. Western Digital's lineup of portable SSDs under different brands shows that the company can offer highly specialized drives for different applications by tweaking firmware features as well as industrial design.