The reason the Xeon CLX system is running a larger back-end heap is because we’re running a single NUMA node per socket, while for the Altra and EPYC we’re running four NUMA nodes per socket for maximised throughput, meaning for the 2S figures we have 8 backends running for the Altra and EPYC and 2 for the Xeon, and naturally half of those numbers for the 1S benchmarks.

For the Ice Lake system, I ran both SNC1 (one NUMA node) as SNC2 (two nodes), with the corresponding scaling in the back-end memory allocation. 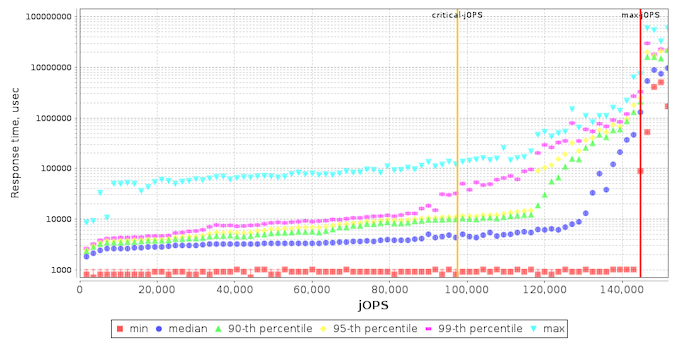 On the SLA graph with the response times across increasing load, we see the Altra Max not differ too much from its predecessor, though it’s simply showcasing improved performance. 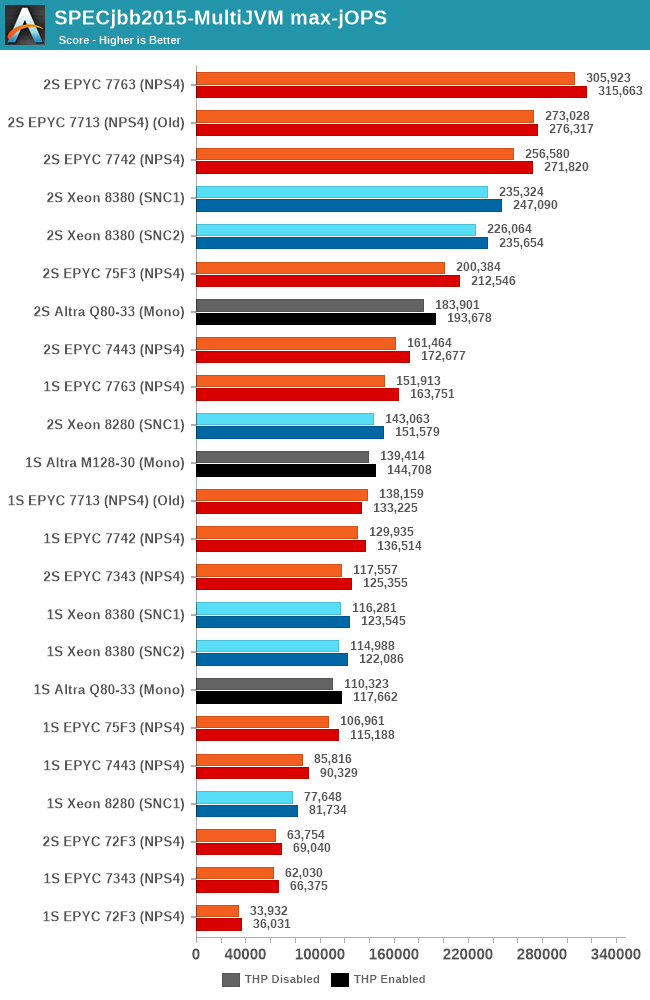 In our initial review of the Q80-33 last year, we had noted that the chip offered lacklustre performance metrics in the SPECjbb benchmark, and though this was somehow attributed to Java performance on AArch64. After spending some more time trying to debug the issue prior to this review, I surprisingly found out that the issue, at least in our configuration, was due to the Altra chip’s operating mode. While we first had tested the chip in quadrant mode, where the chip is partitioned in respective four NUMA nodes, and running four SPECjbb back-ends (one per NUMA node). Running the chip in monolithic mode as an experiment, surprisingly resolved all our performance issues with SPECjbb, with the Q80-33 now running in line where Arm had expected the system to land, which meant increase in the max-jOPS metric and a more massive increase in the critical-jOPS metric as we’ll see in a bit. Unfortunately, trading in one issue with another, we ran into other issues on the 2-socket test scenario where the test ran into issues at large thread counts. The 2S Q80-33 figures here only stresses 130 cores, while I wasn’t able at all to get 2S M128-30 figures at reasonable core counts, so I completely omitted results here.

Focusing on the 1-socket results instead, both the Q80-33 and the new M128-30 now showcase much better performance than what we had seen in the first review of the Altra. The new M128-30 sees a +26% boost in peak throughput performance compared to the Q80-33, however, the chip still lags behind AMD’s flagship EPYC 7763.

The Altra Max here not only is able to increase performance through more cores, but it’s also just outright able to make more usage of its system TDP of 250W. The workload being more data-plane bound, which is also the reason it scales well with SMT, had the effect that the 80-cores on the Q80-33 were running at lower execution resources and lower power, averaging at ~180W, quite below the 250W TDP. The per-core utilisation doesn’t change on the M128-30, but throwing more cores at the matter does help saturate more of the available TDP and result in more performance. 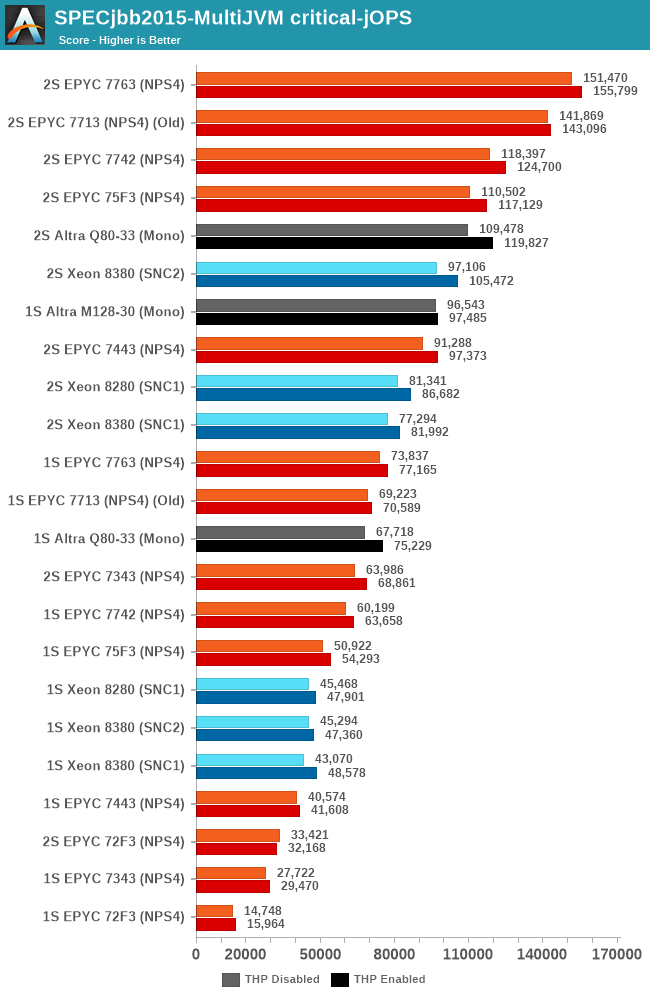 The new critical-jOPS figures for this review are massively improved, with the Q80-33 now posting double that of what we had originally measured. The new M128-30 now further pushes this up, reaching an impressive figure of 96k-jOPS, significantly above the second-best CPU which is the EPYC 7763 at 73k. These new results are much more in line with what we had expected of a single large monolithic CPU design, and showcases the Altra Max in its best possible light and what Ampere tries to focus on – better performance predictability than what the competition can offer with SMT.

We’ll continue to try to figure out what’s happening with the system in the dual-socket scenarios – it’s possible we’re hitting some sort of inherent scaling issue with SPECjbb at these massive thread counts.