As discussed in the Dual Core Platform Shootout, NVIDIA does not plan, at this time, to produce a non-SLI version of the nForce4 chipset for Intel. This makes the nF4 Intel boards expensive and specialized in providing support for two video cards working together. The 955X is similarly the enthusiast or high-end version of Intel's new chipset line, with the 945 being the lower cost version of the new Intel chipsets that will be aimed at the computer mainstream. In the chipset hierarchy, you would expect the nF4-SLI based boards to be the most expensive, followed by 955X, and finally the 945. You will also likely see chipsets from SIS, VIA, and ATI that will generally compete with the Intel 945. ATI and SIS in particular are targeted at the integrated video or "G" versions of the 945. Depending on final decisions, you may also see either ATI or VIA (or both) decide to take NVIDIA's approach with an "SLI-like" dual video card setup on the Intel high-end.

This puts in perspective the target market of both these motherboards, which is the computer enthusiast. Asus will likely have other 955x boards with some reduction in features, but their top-of-the-line are the P5WD2 Premium with the Intel 955x and the P5ND2-SLI Deluxe with nForce4-SLI Intel. In the past, Asus has had several models of their top boards with essentially the same performance - the less expensive boards just have fewer features.

The point is that other Asus 955x boards may have fewer features and a lower price, but you can expect performance to be very similar to what we have measured with the P5WD2 Premium. 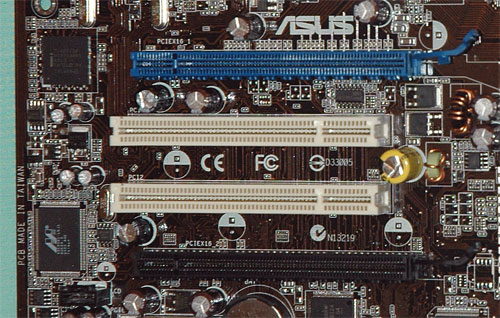 The Asus P5WD2 does have two x16 PCI Express slots and an SLI bridge in the box, but the board can't really be configured as two x8 slots as we see in NVIDIA SLI boards. The main slot remains 16X in both single and dual video modes. The 2nd x16 slot can be configured as Auto, 2X, or 4X in a "semi-SLI" mode that disables the remaining x1 PCIe slots if x4 is selected. The 2 video slots are of limited use for combining video card capabilities as they are now configured. To work at all with current NVIDIA video cards, you have to use the very early (and almost impossible to find) 66.75 drivers. We verified that two video cards are recognized as SLI by the 66.75 drivers, but we could not get any current SLI-enabled games to work properly with the pair of video cards. Asus tells us that future BIOS upgrades will improve this performance. Asus also hinted that other dual video card configurations may also support the dual slots. Could this mean that ATI dual video will work on this Asus with a BIOS update when ATI releases their dual video solution?

Until we see further developments in dual video-card solutions, the two x16 slots work best in supporting two video cards driving up to four monitors. For those who want to drive a 2nd high-end card, the 2nd x16 slot can be configured in a faster x4 video mode, which will not limit the performance of most current video cards. 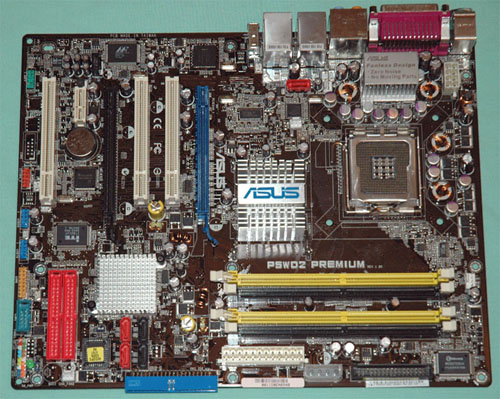 As we have come to expect of Asus, it is clear that a lot of thought went into the layout of the P5WD2. The 3-slot spacing between x16 slots lends itself to video cooling solutions not possible on other "SLI-type" boards. The board itself makes for an easy install with the floppy connector at the top right on the motherboard and all PATA and SATA connectors conveniently placed along the right edge for ease of assembly in a mid ATX case.

Actual cooling on the board follows the Asus preference for passive "no-fail" cooling, with no active fans on any of the chips. During overclocking, the chipset does create a lot of heat and we would advise that if you plan to seriously overclock the P4, you are going to need to add a fan at least to the Northbridge heatsink. 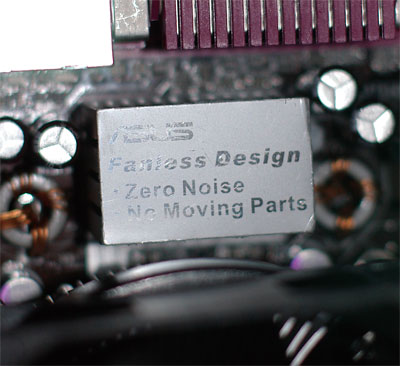 Asus has also chosen to cool the mosfets that feed the CPU vcore with a heatsink. This is a trend that many manufacturers of performance-oriented boards are adopting as heat on high load increases instability. We saw the same feature used on the widely publicized Grouper ATI board from Sapphire a while back, which even featured custom aftermarket water blocks. The same could be applied to the P5WD2 if you chose to use water-cooling.

Voltage options are refreshingly wide on the P5WD2, with memory voltage to 2.3V, a full range of chipset, bus, and termination voltage adjustments, and an exceptionally wide range of vCore voltage adjustments. Memory ratios are also the widest that you will likely see on any 955X board, which allows the option to run the memory much faster than the CPU. The actual memory tweaks, however, are somewhat limited; it would be nice to see some of the tweaks that we have grown to love on the NF4 chipset available on Intel chipsets also.

Asus is still supporting PATA RAID, although it must now have a limited shelf life. Also available is a SATA port positioned for adding a rear-mounted SATA back plate port for those who just like to run an external or portable SATA drive. This feature means that you won't have to open up the case to add a SATA drive.

The only annoying flaw was that the CMOS jumper is poorly positioned. When using 2 video cards, you will need to remove the lower video card to get to the CMOS jumper - or remove the battery to clear CMOS. The layout is otherwise very good, with little to complain about. Some clever manufacturer should consider adding a "CMOS-clear" push button on their motherboard; it would be really handy for enthusiasts who push their boards to the performance limit. 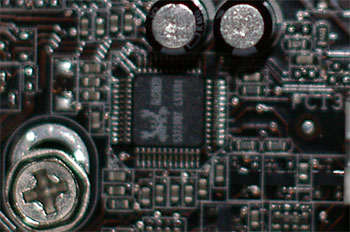 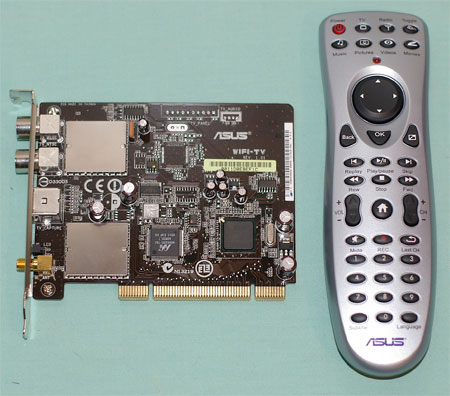 Our evaluation board included a really interesting PCI combo TV Tuner/WiFi card for the P5WD2. The package even included a remote for controlling your new multimedia capabilities. At this point it is unclear whether Asus will include the WiFi/Tuner and Remote in retail packages. If this is important to you then ask what is in the box before you order.