Conclusion: Can You Justify a $500 Motherboard?

There are many motherboard options available for Intel's 11th generation Rocket Lake processors, but none of the chipsets unlock the potential as much as Z590. Pairing up an Intel Core i9-11900K with a Z590 model yields the best results in terms of performance, not only in the socket but also with double bandwidth to the chipset and a refocus on features such as advanced Ethernet and Thunderbolt. But with many options available in Z590, it comes down to three main variables; design, cost, and features. One board that aims to tick all of these boxes, but without claiming flagship status, is the ASUS ROG Maximus XIII Hero.

The ASUS ROG Maximus XIII Hero on paper in its price range (sub $500) is one of, if not the all-around best-equipped motherboard on the Z590 platform for gamers, content creators, and enthusiasts. ASUS has gone out of its way to utilize as many Z590 features as it can and has added extras including an Intel Maple Ridge Thunderbolt 4 controller, which adds two 40 Gbps Type-C ports on the rear panel, which also provide DisplayPort support for compatible monitors. On top of this, ASUS has kitted the rear panel with six USB 3.2 G2 Type-A ports, and two USB 2.0 ports as well. In addition to the Thunderbolt 4 dual Type-C, there's an option to add one USB 3.2 G2x2 which is present via a front panel header. 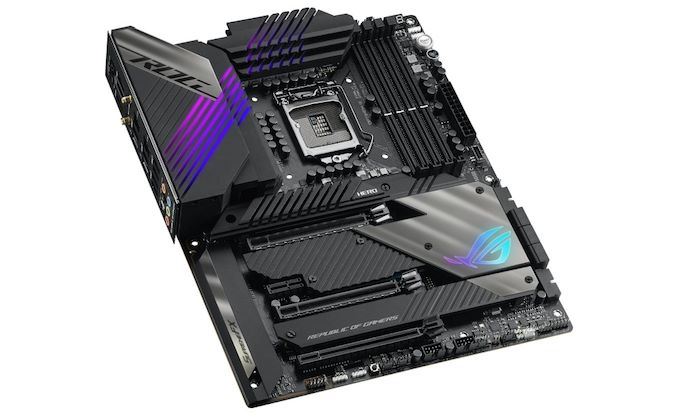 There aren't many boards with more than three M.2 slots, but the Hero is one of them with four. One operates at the fastest available PCIe 4.0 x4, one at PCIe 3.0 x4, and two PCIe 3.0 x4/SATA slots. For conventional SATA-based storage and devices, ASUS includes six with support for Intel RAID 0, 1, 5, and 10 arrays. The Hero also uses Intel's latest AX210 Wi-Fi 6E CNVi, which adds support for BT 5.0 devices, and on top of this, ASUS includes two Intel I225-V 2.5 GbE controllers with premium dual LAN on the rear panel. Benefiting from Rocket Lakes native PCIe 4.0 lanes, there are two full-length PCIe 4.0 slots operating at x16, and x8/x8, with a further full-length PCIe 3.0 x4 slot, and one smaller PCIe 3.0 x1 slot.

Moving onto the performance, which is bread and butter for users to gauge that everything is working as it should, the Hero performed competitively in both our gaming and compute benchmarks. We saw solid performance in our system testing, with respectable power consumption and non-UEFI POST times, but the biggest win was in DPC latency. We test DPC out of the box, and the ASUS posted the lowest latency of any Z590 model we've tested so far.

When it came to overclocking the Hero, we saw very impressive results, not only is it one of two boards to allow us to run 5.3 GHz stable with our Core i9-11900K, but VDroop control throughout our testing was tighter than a wheel nut. ASUS includes its AI Optimized overclocking profile which basically grades the method and aggressiveness of the cooling, looks at variables such as CPU SVID voltage, and selects optimal settings from a predefined look-up table. So far, the AI Optimized setting is one of the best built-in overclocking profiles we've come across on Z590 so far, and for good measure, ASUS also includes a variety of memory overclocking presets for tweakers, enthusiasts, and extreme overclocks with high BIN memory to maximize performance.

Another win for ASUS was in our VRM thermal testing, with the lowest temperatures in our Z590 testing so far. Unlike a number of other manufacturers, ASUS is using an efficient 16-phase power delivery running at 7+1 with teamed power stages and isn't dumping the heat directly into the power plane. The performance was even considerably better than models we've tested with active VRM cooling, which means ASUS should be applauded for the power delivery, and heatsinks efficacy to remove any heat that's there.

At the time of writing, the ASUS ROG Maximus XIII Hero has an MSRP of $500, which when considering everything that's on offer feature-wise, and the impeccable performance in our overclocking and VRM thermal testing makes it a no brainer. The only caveat is the price, and for some users, it will be a tough pill to swallow. For most, spending more on the motherboard than the processor seems like an insane prospect, and to be honest, we at AnandTech would tend to agree. In that mind, the Hero is only really for i9-11900K users who want to push push push, but also get a lot of premium features besides. 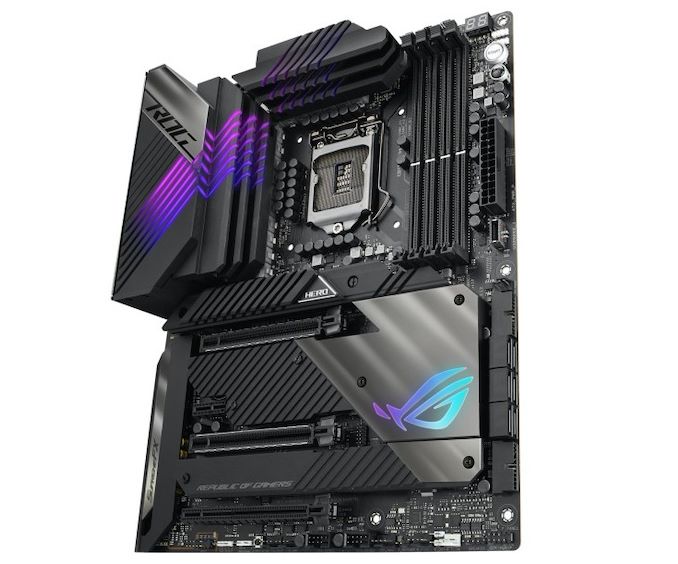 The main thing to consider here is that ROG usually attracts a premium, and all that design and R&D comes at a cost. For users looking for a sub $500 motherboard with everything you could need, four M.2, solid memory support, robust power delivery, solid performance, the ASUS ROG Maximus XIII Hero is a solid motherboard for Rocket Lake. There are more expensive boards on the market, and aside from those that come with integrated water blocks, we struggle to see what else users investing in a Rocket Lake platform would need.