by Derek Wilson & Jarred Walton on April 29, 2005 2:00 PM EST
17 Comments | Add A Comment
17 Comments + Add A
Comment
We've snapped pictures of some of the units that were being demonstrated at the show that were targeting the media center audience. There are of course numerous ways in which to approach such a market, but we'll be focusing here on the more unique designs. Probably half to two-thirds of the booths in the Expo Hall had a media device present, with one to many streams of HD and/or DVD content all running in real time.


Texas Instruments was demonstrating this "Split Chassis PC Product". While the main system was a standard PC connected to an HDTV, the small module you see above was connected to the main system via an X1 PCIe cable. With a bidirectional data rate of 2.5 Gbps (250 MBps data throughput, as 62.5 MBps is used for communication overhead), the connection is more than capable of handling all of the necessary traffic. The end result is that the large media processing PC can be stored out of sight and the only visible interface is this small box, roughly the size of a typical 5.25" DVD drive (2x7x10 inches). Keyboard, mouse, USB, Firewire, and audio connections are all present on the "I/O Hub", along with IDE and CardBus/PCMCIA and a flash card reader.

Texas Instruments feels this provides a compelling solution, with the PCIe X1 cable providing up to 7 meters of distance between the main PC and the I/O Hub. The PC still needs to be close enough to connect to your HDTV, of course, which is a limitation of the DVI or component video cables that are used. There are certainly some interesting use cases for the design, i.e. a console located in a unit next to your sofa with the noisy PC placed where it can be neither seen nor heard. Couch potatoes of the world will rejoice at the ability to change a DVD without ever standing up!

While the Athlon and Pentium processors receive the lion's share of attention these days, there are still many alternative processors that can be used for media devices. Intel has the XScale architecture, which is non-x86 - it's an extension of the ARM5TE architecture. There may have been some devices using this processor, but we didn't notice any. Moving on, AMD has their Geode GX and NX processors, VIA has the Eden CPU as well as a new Luke processor, and Transmeta has their Efficeon processors. We've got images of some prototypes for all of these platforms.


Starting with AMD, the Geode processor is designed as a low power embedded solution. The GX model shown above-left consumes a miniscule 1.1W at 533 MHz. For video content, a hardware decode/encode chip would be required for most formats. The NX is a higher performance version, as well as a higher power device. We didn't get a clear shot of the screen, but DVD quality video was being decoded without problems from the system on the right. Without some additional hardware assistance, HD content would probably have difficulty, however.


Our next stop was at the Transmeta booth, where they were demonstrating their 100% silent media center sample. You can see the internal components as well as their exterior. According to the booth personnel, the sample unit was designed and built for the show in only a few months using mostly off-the-shelf hardware. A couple of the more interesting aspects are the use of a dual-tuner card (that's the large add-in card you see on the left of the image), allowing for recording one channel while a second is being watched. We're not convinced about the need to handle 4+ simultaneous streams, but there is definitely a good use case for handling at least two streams.

It's also interesting to note that a Mobility Radeon 9700 was used in their prototype, which is probably a lot more power than most companies would put into a media center device. On the other hand, that does give them the ability to handle Longhorn (with the Aero Glass UI) once it ships. With no fans on the system, it should be totally silent (other than perhaps the DVD drive when it's in use) - not that we could verify this over the crowd noise. However, we're a bit concerned about long-term reliability, and a single temperature sensitive, low-RPM fan might be a useful addition. This would help to guarantee that the HDD and other components are kept cool, helping to increase their lifespan. This can be particularly important during the summer months.

VIA Eden and Luke


Our last examples for media center devices come from VIA. The Eden processor has been around for quite some time, but this was the first we had heard of the Luke processor. Basically, it was their North Bridge solution with the Eden integrated - and we say it that way rather than the Eden with an integrated NB as the NB is roughly 3X the size of the CPU! The whole board is covered by a passive heat sink, but you'll note the small size of the board: 10cm x 10.5cm; it's not much larger than the attached 1.8" HDD. While the Luke setup was only shown powering XP, a nearby Nano platform was shown decoding 720p HDTV without trouble. (The photo is blurry due to our camera and photography skills, not the LCD or platform.) Via touts the Nano platform as being the "most highly integrated platform for small digital entertainment devices," and at 12cm x 12cm it certainly isn't large. Now they just need to clean up their wiring....


We didn't get a shot of the working prototype system (well, we did but it was so blurry that it was unusable), but we did get some photos of the board and specs for VIA's take on the SMP market. That's not how they described it, but we thought the dual-processor Eden setup was rather intriguing. At 17cm x 17cm, it's larger than their other demo platforms, but it also includes quite a few more features. Besides the two Eden CPUs, it has GbE along with a second 10/100 Ethernet port, two DIMM slots, 2 x SATA and 1 x IDE, and the CN400 NB (integrated UniChrome Pro graphics, hardware support for MPEG2 decoding, and MPEG4 acceleration). It's basically the same as the Nano platform but with SMP and a larger board. Two Eden chips aren't going to set any performance records, but then the target market isn't really about raw performance. Anyway, we thought it was pretty cool, considering the small size of the CPU connections and the low heat output. Maybe a Luke-II CPU can incorporate both cores with the chipset? 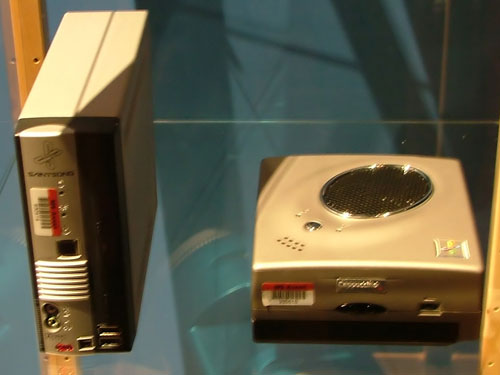 Here's a final shot of a couple small units from a company called SaintSong that were in the hardware showcase. We're not even sure what the specs are, but they're just barely thicker than a typical 5.25" DVD-RW drive while not being quite as long. Assuming the price, performance and features can at least match the Mac Mini - with perhaps better media support - we're sure there will be some interested buyers.

Just to reiterate, these are all prototype or reference designs at best. Interested vendors could add or remove features from any of these platforms in order to meet the demands of their target market. We may never see any of these specific units for sale, but the concepts presented could easily show up in next generation cable/set-top boxes. Microsoft's vision of a digital home is going to require a lot more than large ATX-size PCs, and these smaller devices are meant to fill those roles.