When the UltraSharp 2005FPW debuted circa November 2004, several of our forum members promptly bought several units without hesitation. Many readers in response emailed us with complaints, and several forum threads illustrated the debacle. It seemed to us that there were three main complaints: Of those three bullets, the first two started occurring as soon as the monitors were released; the last bullet seems to have only plagued readers in the last two months. Unfortunately, we didn't have access to an UltraSharp 2005FPW until January (the unit used for the benchmarks of this analysis was built in March 2005), but once we saw our first unit, we had difficulty understanding where the problem was. It could have been that only the original batch of 2005FPW had some isolated problems, or it could have been that those few units were mishandled in shipping.

Screen discoloration, particularly "warm" colors, occurs for many different reasons. Perhaps the largest reason why we see such discoloration is due to the use of a poorly shielded or a heavily interfered 15-pin D-sub connector. At 1680x1050 resolutions (native for the Apple 20" and Dell 2005FPW), so much analog bandwidth is moving over the cable that it becomes very easy for the signal to become unstable. Generally, this results in the whole screen discoloring, but we have witnessed incidents where the strangest interference will discolor only a portion of the screen. The interconnects between the LCD panel and the monitor PCB could also have some interference along them, or even worse, they may be damaged/unset. In our experience with the Dell 2005FPW, when any of these cables were unset, the monitor backlights quickly switched off. The third culprit may have been the Genesis controller itself, although we would expect the whole screen to discolor as opposed to a small blurry portion. Glare and lighting effects also play their portion of tricks on the eye, and we have diagnosed more than one discoloration problem as reflections from unusual sources.

Poor screen uniformity is almost always a product of construction; either the unit was handled improperly or assembled incorrectly. We feel that this is the most severe of all three of the problems, since its almost impossible for the end user to misdiagnose this (unless people are tossing their 2005FPWs on the ground and then sending us pictures just for kicks!).

The last problem troubles us a little, although it can be generally attributed to a poor video card or a poor cable. After working very closely with Silicon Image over the last few months, it has come to our attention that several DVI video outputs and cables are surprisingly low quality. Unlike analogy D-sub cables, a poor DVI signal will just cause the monitor's DSP to ignore the signal. It may be that the Genesis gm1501 chips produced in the last few months have lower tolerances for faulty signals - or it may just be the case that we didn't have any reported cases of the DVI signal problem on older 2005FPW displays.

After repeating the benchmarks from this analysis on a separate Dell 2005FPW assembled in January 2005, we did not find a difference between the two displays within a 1% tolerance. So far as we could tell, both units were assembled with the same revision DSPs and panels. The fact that even the brightness and wattage usage were identical between both units also leads us to believe that the same backlights were used in both panels. The slight discoloration on the image on the right is actually from the March assembled display, and it is nothing more than a trick of the camera. 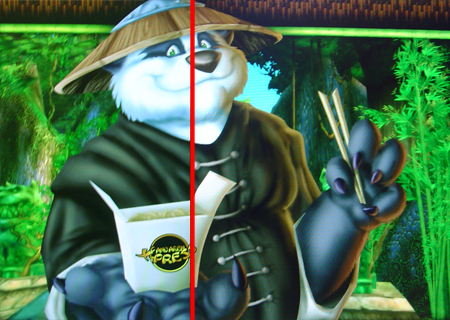 In our opinion, the fear of Dell UltraSharp 2005FPW image quality may have been a little exaggerated. Although the Apple Cinema displays use the same panels as their Dell counterparts, we never heard a single case of a defective Cinema 20" display. However, do consider the fact that the Apple uses much simplier signal processing and only on a digital source. Also keep in mind that the Cinema displays are also relatively easier for quality assurance; Apple hardware is scrutinized much harder than typical PC hardware - thus, video cards and cabling are more likely to work 100% correctly. The fact that UltraSharp 2005FPW has analog inputs most likely attributed to the early problems mentioned above.