Alongside the ISO-process node IPC, power and area projections, Arm also made projection of possible eventual implementations of the V1 and N2. These would naturally no longer be ISO-process, but the company’s expectations of what actual possible products might end up as in future designs. 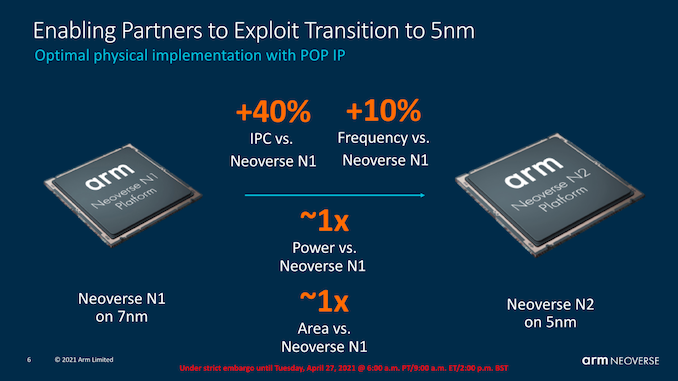 The most important slide and disclosure in this regard is the fact that a Neoverse N2 design on TSMC’s 5nm is expected to achieve the same power as well as the same area as a TSMC 7nm Neoverse N1 design today.

In general, that’s a relatively large presumption, but could possibly pan out if the vendors are able to achieve a good implementation. We don’t have too many details as to the 7nm node generation of Amazon’s or Ampere’s current N1 chips, but I would assume that they’re baseline N7 – at least similar to that of what AMD uses in their EPYC 7002 and 7003 chips.

Still, a -40% power reduction from N7 to N5 is a very high goal and assumption to make. The only N5 chips we’ve had in-house to date, the Kirin 9000, and Apple A14, showcased only a rough 10% efficiency advantage over their N7P predecessors. N7P being roughly 15% better than N7, that’s still only somewhat 26% better efficiency. 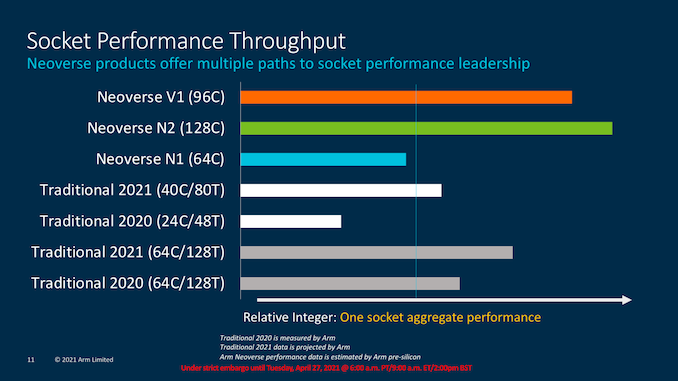 In terms of socket performance, Arm is expecting some very large generational gains versus a 64C N1 product today – it’s to be noted that these are Arm pre-silicon figures and not the Graviton2.

The “Traditional 2020” chips are the 24C Xeon 8268 and the 64C EPYC 7742. I would ignore the “Traditional 2021” parts here – Arm was aiming and estimating the performance of Intel’s newest 40C Ice-Lake and 64C Milan, however the presentation and figures here were integrated before AMD and Intel actually launched those systems – we have actual benchmark numbers in a custom graph below. 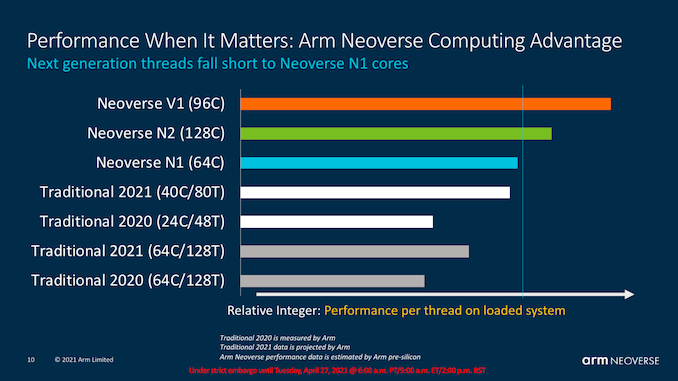 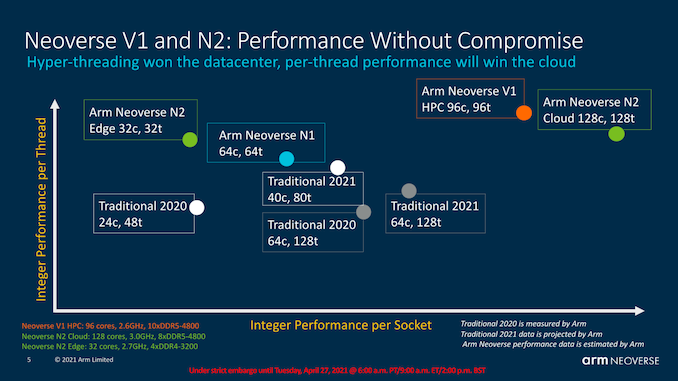 One metric Arm was focusing on was per-thread performance, where the “traditional” cores from AMD and Intel are falling short of the performance of Arm’s Neoverse cores.

I can’t really blame Arm for depicting the performance figures like this – the cloud vendors today don’t really differentiate between real cores and SMT cores in vCPU environments, even having pricing that’s arguably unfair to SMT-enabled designs, which is why we’ve deemed Amazon’s Graviton2 m6g instances to vastly outperform AMD and Intel instances in terms of perf/W and perf/thread. 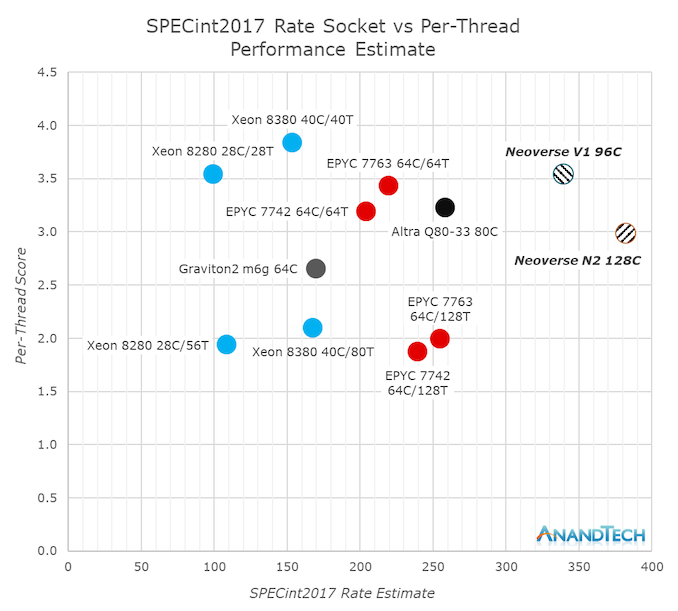 I wasn’t happy with Arm’s slides not including 1 thread per core performance figures for the SMT systems, so I included my own chart based on actual measured performance figures on the various platforms. The V1 and N2 figures use Arm’s performance scaling versus the Neoverse N1 datapoint, and I’ve baselined that to the Graviton2 scores we’ve measured earlier last year. Arm uses the same compiler flags as we do and also GCC 10.2, so the scores should also be compatible – with the only discrepancy being that Arm used 2MB page sizes.

Arm’s per-thread performance lead doesn’t look that great here when looking at the 1T/C figures of AMD and Intel, but admittedly when in a vCPU scenario, Arm’s design would vastly outperform the SMT chips.

Generally speaking, the performance figures look good when it comes to per-socket performance, but generally that’s to be expected given the new 5nm process node and the more advanced memory controller technology in the projected figures.

AMD's next-generation Genoa should feature more massive performance jumps through the adoption of N5, DDR5, and transition away from their 14nm IO die. IPC and core count increases should also close the gap that’s depicted today. Intel’s next generation Sapphire Rapids should also improve the situation – albeit how that ends up depends on how much they’ll be able to squeeze out of 10nm SuperFin node in relation to what we’ve seen a few weeks ago on Ice Lake-SP.

Usually, I’m more open to Arm’s performance projections, however this time around the V1 and N2’s performance projections are extremely optimistic, especially since they’re completely dependent on the vendors achieving good implementations on N5 and actually reaching the projected 40% perf/W process node and implementation power efficiency gains. Based on what I’ve seen in the mobile space, I remain quite sceptical, and will be adopting a wait & see approach this time around.