Picking up from the power efficiency discussion, let’s dive directly into the multi-threaded SPEC results. As usual, because these are not officially submitted scores to SPEC, we’re labelling the results as “estimates” as per the SPEC rules and license.

We compile the binaries with GCC 10.2 on their respective platforms, with simple -Ofast optimisation flags and relevant architecture and machine tuning flags (-march/-mtune=Neoverse-n1 ; -march/-mtune=skylake-avx512 ; -march/-mtune=znver2 (for Zen3 as well due to GCC 10.2 not having znver3).

The new Ice Lake SP parts are using the -march/-mtune=icelake-server target. It’s to be noted that I briefly tested the system with the Skylake binaries, with little differences within margin of error.

I’m limiting the detailed comparison data to the flagship SKUs, to indicate peak performance of each platform. For that reason it’s not exactly as much an architectural comparison as it’s more of a top SKU comparison.

To not large surprise, the Xeon 8380 is posting very impressive performance advancements compared to the Xeon 8280, with large increases across the board for all workloads. The geo-mean increase is +54% with a low of +40% up to a high of +71%.

It’s to be noted that while the new Ice Lake system is a major generational boost, it’s nowhere near enough to catch up with the performance of the AMD Milan or Rome, or Ampere’s Altra when it comes to total throughput. 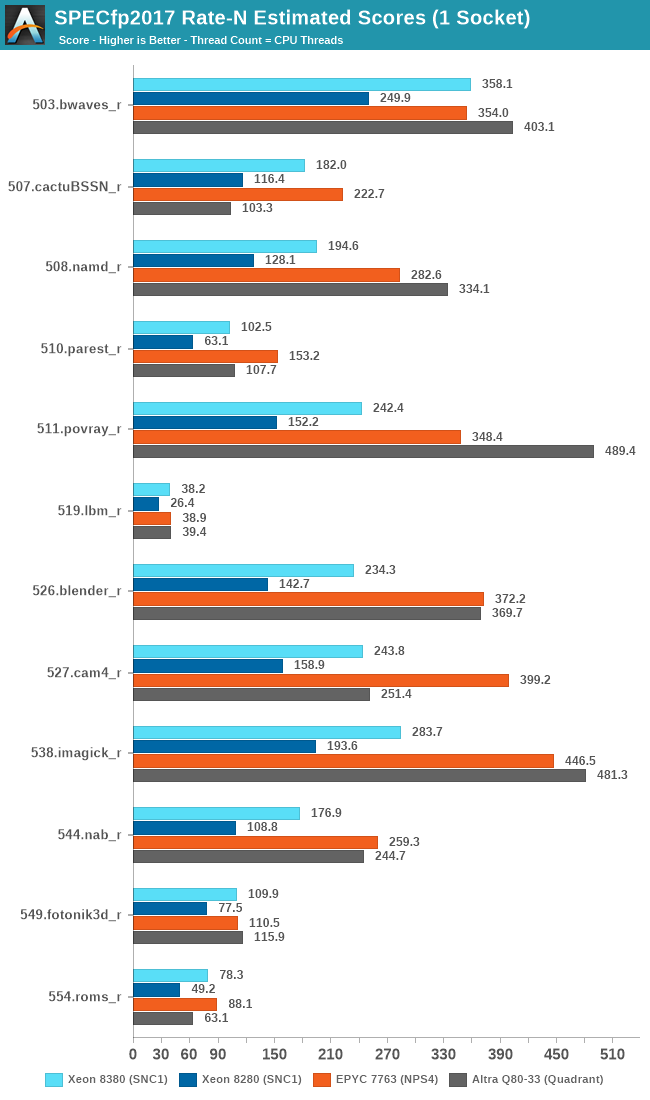 Looking at the FP suite, we have more workloads that are purely memory performance bound, and the Ice Lake Xeon 8380 again is posting significant performance increases compared to its predecessor, with a geo-mean of +53% with a range of +41% to +64%.

In some of the workloads, the new Xeon now catches up and is on par with AMD’s EPYC 7763 due to the fact that both systems have the same memory configuration with 8-channel DDR4-3200.

In any other workloads that requires more CPU compute power, the Xeon doesn’t hold up nearly as well, falling behind the competition by significant margins. 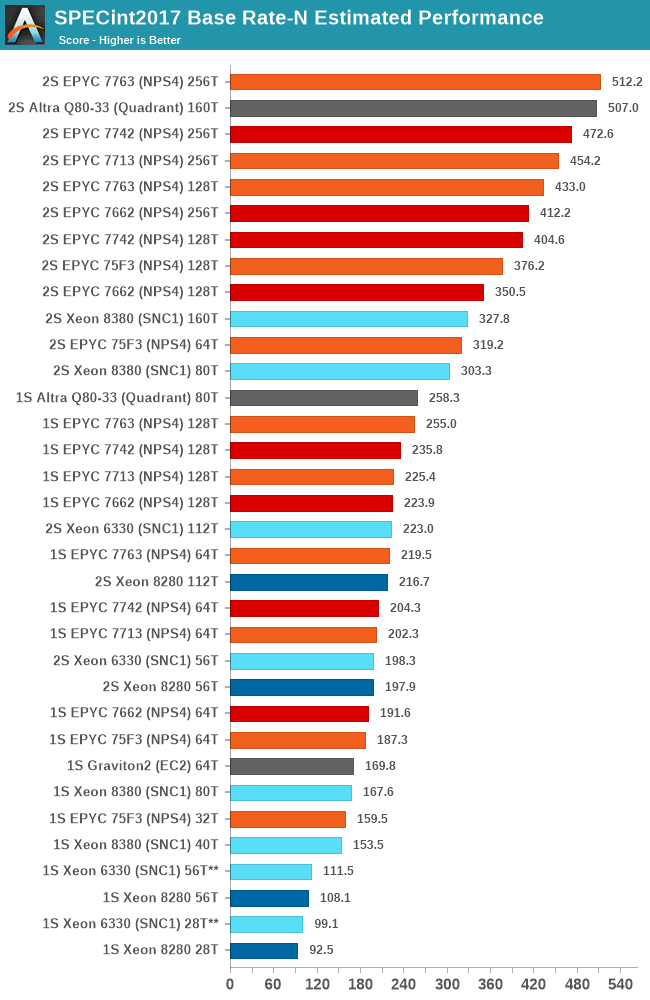 In the aggregate geomean scores, we’re seeing again that the new Xeon 8380 allows Intel to significantly reposition itself in the performance charts. Unfortunately, this is only enough to match the lower core count SKUs from the competition, as AMD and Ampere are still well ahead by massive leads – although admittedly the gap isn’t as embarrassing as it was before. 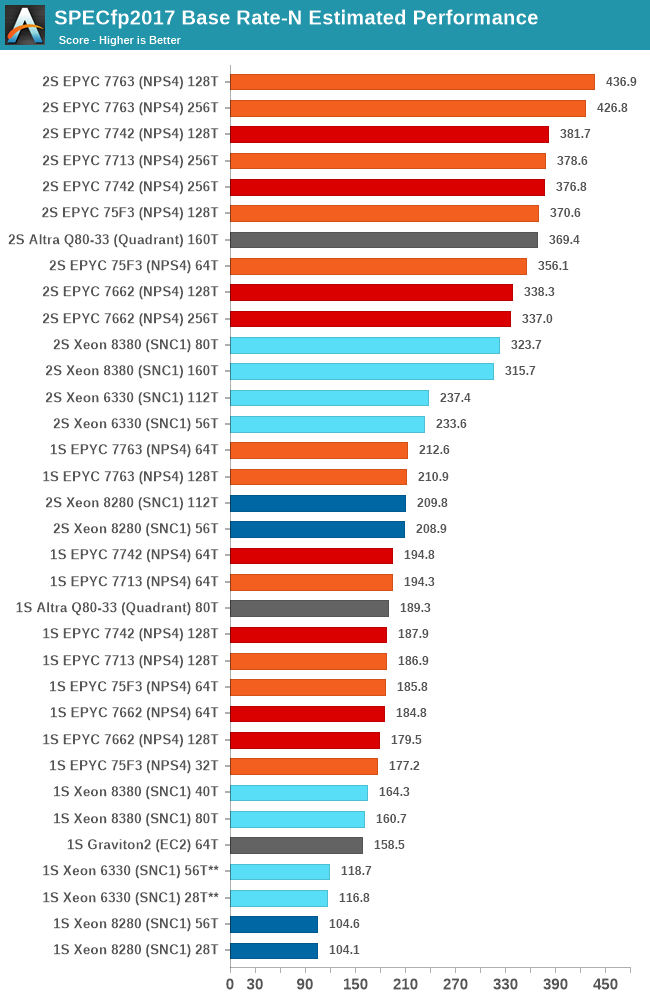 In the floating-point suite, the results are a bit more in favour for the Xeon 8380 compared to the integer suite, as the memory performance is weighed more into the total contribution of the total performance. It’s still not enough to beat the AMD and Ampere parts, but it’s much more competitive than it was before.

The Xeon 6330 is showcasing minor performance improvements over the 8280 and its cheaper equivalent the 6258R, but at least comes at half the cost – so while performance isn’t very impressive, the performance / $ might be more competitive. 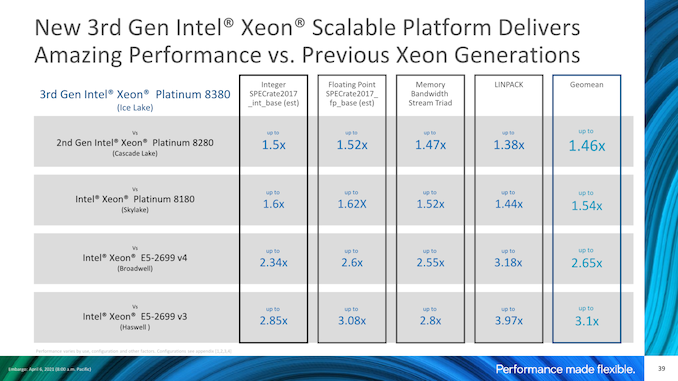 Our performance results match Intel’s own marketing materials when it comes to the generational gains, actually even surpassing Intel’s figures by a few percent.

If you would be looking at Intel’s slide above, you could be extremely enthusiastic about Intel’s new generation, as indeed the performance improvements are extremely large compared to a Cascade Lake system.

As impressive as those generational numbers are, they really only help to somewhat narrow the Grand Canyon sized competitive performance gap we’ve had to date, and the 40-core Xeon 8380 still loses out to a 32-core Milan, and from a performance / price comparison, even a premium 75F3 costs 40% less than the Xeon 8380. Lower SKUs in the Ice Lake line-up would probably fare better in perf/$, however would also just lower the performance to an even worse competitive positioning.