Power efficiency in the server world infers performance, as the more efficient a CPU is, the more compute power is available in a given TDP. Ice Lake in this regard is extremely interesting given it’s Intel’s first 10nm server design, and in theory should represent a major leap forward for the new 3rd Gen Xeon line-up.

The comparison here is a bit rough this time around, as we’re dealing with a bit of a apples-and-oranges comparisons between the generational SKUs, particularly the 40-core 270W Xeon 8380 and the 28-core 205W Xeon 8280. Fortunately, we had also been sourced a Xeon 6330 from a third vendor, which is a 28-core 205W Ice Lake SP part, which should make generational comparisons a bit more interesting and fairer, although still not quite optimal as we’ll see. 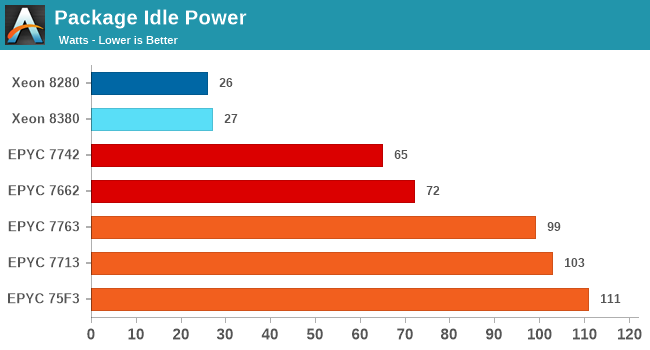 Starting off with idle package power, this was something I had made note of in our coverage of AMD’s Milan CPUs a few weeks ago, where the new AMD chip had regressed in terms of apparent IOD power and eating through the power envelope of the socket resulting in some compute performance regressions.

It’s to be noted that we’re not exactly comparing apples-to-apples here, as AMD’s designs are full SoCs, while the Intel CPUs are merely just CPUs that require the usage of an external chipset (Lewisburg Refresh) which by itself uses about 18W, essentially moving that power requirement off-socket. Intel has multiple versions of the chipset on offer, based on Compression/Encryption offload requirements, up to 28.6 W.

Intel’s new Ice Lake SP system, similarly to the predecessor Cascade Lake SP system, appear to be very efficient at full system idle, reaching only around 27W per socket. It’s to be noted that these figures are only valid when both sockets are idle, if one socket is under load, the second socket’s power consumption will also grow in tandem even though it’s idle, we’ve seen idle figures up to 70W when the other socket is under full load, and even 90W when one socket is boosting frequencies very high. I suspect this is due to voltages and shared power delivery of the 2-socket system. Generally, it’s not of concern in the real world, but it’s just an interesting titbit to make note of.

The more interesting efficiency data is the actual power and energy consumption under load, and the corresponding performance between the generations. Again, we’re in a bit of a difficult situation here as the comparison isn’t as straightforward as the AMD Milan figures from a few weeks ago where we were comparing equal core-count and equal-TDP SKUs.

The new Xeon 8380 flagship Ice Lake SP CPU comes in at a default TDP of 270W, which is 65W higher than its direct predecessor, the 8280, and also features many more cores. Alongside the 270W default setting, I measured this part under a 205W limited power setting to add an extra data-point.

Intel doesn’t make available core-only power metrics on its recent server chips, so we fall back to total package energy measurements only. I add in the total socket energy consumption for the duration of all workloads, as well as the performance and energy measurements on a per-thread basis as we’re dealing with different core-count designs here.

Starting off with the new flagship CPU, the Xeon 8380 indeed has little trouble to significantly outperform the Xeon 8280 by 54% in both integer and floating-point SPEC suites. This comes as no surprise as the new SKU is also using a higher TDP.

As per-thread performance is roughly similar between the two parts here, we can also do an energy per workload comparison, with the Ice Lake SP SKU using -27 to -23% less energy to complete the same task.

Looking at the Xeon 6330 at its default settings, the figures are quite less impressive. At +2.8 and +13.2%, the new design is posting rather lack-lustre performance boosts. The power efficiency and energy consumption figures are also extremely close to that of the 8280.

It’s to be noted, that Intel also has the Xeon 6348 in its line-up which is a 28C part as well, but with a 235W TDP. The results of the 6330 really aren’t too fantastic, even if it’s a weakly binned SKU that comes at a much cheaper price than its predecessor, meaning there’s a possible wide range in silicon quality between the new Ice Lake SKUs, indicating that a badly binned Ice Lake SKU isn’t notably better than a well binned Cascade Lake part.