Despite our best efforts, some of the best characterization of the impact of dual core is done with words.  The best way to put it is like this: if an application is eating up all of your CPU time, with dual core, you still have one core left to make the rest of your system just as responsive as before.  But if you want a more detailed account of such a scenario, take a look at some of our lab notes:

So, I was playing around with Outlook, copying a bunch of emails, basically the equivalent of copying a 280MB PST file, which isn't huge by any means.  In copying the emails, the CPU utilization skyrocketed to 100% and I was off trying to browse the web to see how responsive that was.

On this HT disabled P4 3.73EE, I could browse the web just fine. I had Firefox open and around 10 tabs and all was fine.  I went to minimize Firefox and the animation was very choppy, but it still minimized/restored just fine.  I had Photoshop CS running in the background - I tried to switch to it, but all I got was the outline of Photoshop. I couldn't see or interact with the app at all.  I switched back to my other apps, Newsleecher, Firefox, iTunes, and they all worked fine, but Photoshop and Outlook were not responding.

I tried to take a screenshot of what was going on, but print screen wouldn't work.  I could launch Paint, but I couldn't paste anything into it.  So, I went to go get my digital camera to take a picture of it, but my CF card was full.  I went and found my CF card adapter, plugged it into my personal machine, copied all of my pictures back to my computer (128MB card), wrote this text and then put the CF card back in my camera and took a picture of what was going on.  At least 10 minutes had to have elapsed and Photoshop was still not responding. 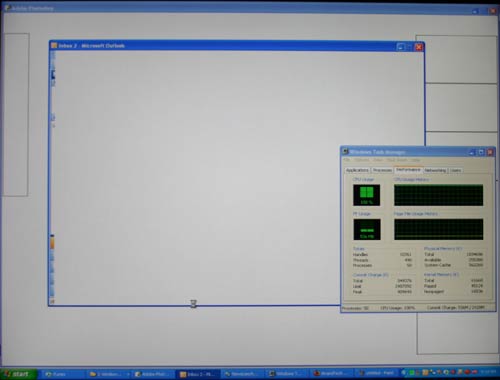 The only solution?  Kill both Photoshop and Outlook using task manager - at least I had access to task manager.

I wanted to see if it was a fluke, so I tried it again.  This time, Photoshop was fine, but Outlook still hung.  I closed and restarted Photoshop and got the following: Photoshop was basically hung and slowly made its way into a loaded state.  A bit of a pain, especially when the only solution is to kill Outlook and I still can't get my emails copied over.

I repeat the same basic test with HT on; the obvious difference is that the UI is a lot faster.  Minimizing/restoring windows is no longer super choppy, and application launches are much quicker.  Launching Photoshop didn't yield the same, almost dying; results as before.

To push things even further, I started the DVD Shrink test and although the performance was obviously impacted, the system still remained quite responsive - other than Outlook, which was taking its sweet time.

I could still browse the web just fine, and overall, the rest of the system was pretty impressive despite Outlook being a rogue process.

Now, time to try it out on the Pentium D 3.2GHz.  On this chip, I went through the same setup. The first thing I noticed was that merely clicking on the Inbox in Outlook didn't pause the system for 7 - 10 seconds as it did on the single core platforms. It only took 1 - 2 seconds; it felt much more responsive.

The next thing was that the Outlook window never turned completely blank. I still couldn't play around with the Outlook interface, but the window was always drawn.  I'm not sure if this is necessarily a great thing, but it's a noticeable difference.  I could still minimize the window, but I just couldn't interact with anything within the window.

Time to stress the system a bit more. I fired up the DVD Shrink benchmark, and started shrinking a DVD while downloading headers from Newsleecher.  I then closed Photoshop and tried to restart it...wow, the application opened as quickly as it normally would have - no delays, nothing.

Outlook did eventually start listing itself as "Not Responding", but I still had full interaction with the rest of my system, even though both CPUs were pegged at 100% I'm guessing that because of the nature of the other applications, I could still switch between them, interact with them and launch more apps without any noticeable degradation in performance.

The other major change was that Outlook could now be closed using its own X button, instead of me having to kill it via task manager.  Speeding up the Outlook task would require faster single cores (and maybe a faster hard disk), but dealing with its impact on the rest of the system is best handled by multiple cores.

The experience here was pretty much the same as the Pentium D, but just with even better performance in the DVD Shrink task (still taking under 14 minutes to deal with the DVD).

The computer was maybe slightly more responsive, but nothing huge. When compared to the non-HT Pentium D.  It is clear that HT does help dual core, although not as much as it helps single core P4s.