The highly anticipated iteration of the Grand Theft Auto franchise hit the shelves on April 14th 2015, with both AMD and NVIDIA to help optimize the title. At this point GTA V is super old, but still super useful as a benchmark – it is a complicated test with many features that modern titles today still struggle with. With rumors of a GTA 6 on the horizon, I hope Rockstar make that benchmark as easy to use as this one is. 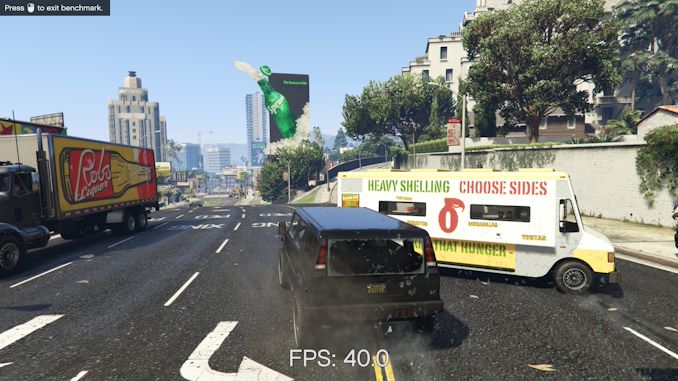 GTA doesn’t provide graphical presets, but opens up the options to users and extends the boundaries by pushing even the hardest systems to the limit using Rockstar’s Advanced Game Engine under DirectX 11. Whether the user is flying high in the mountains with long draw distances or dealing with assorted trash in the city, when cranked up to maximum it creates stunning visuals but hard work for both the CPU and the GPU.

We are using the following settings:

The in-game benchmark consists of five scenarios: four short panning shots with varying lighting and weather effects, and a fifth action sequence that lasts around 90 seconds. We use only the final part of the benchmark, which combines a flight scene in a jet followed by an inner city drive-by through several intersections followed by ramming a tanker that explodes, causing other cars to explode as well. This is a mix of distance rendering followed by a detailed near-rendering action sequence, and the title thankfully spits out frame time data. The benchmark can also be called from the command line, making it very easy to use.

There is one funny caveat with GTA. If the CPU is too slow, or has too few cores, the benchmark loads, but it doesn’t have enough time to put items in the correct position. As a result, for example when running our single core Sandy Bridge system, the jet ends up stuck at the middle of an intersection causing a traffic jam. Unfortunately this means the benchmark never ends, but still amusing.