The MSI B560M-A Pro and B560M Pro represent its more professional series of motherboards, designed for a basic and no-frills approach. Typically designed for more professional systems such as small office PCs, the Pro series curtails on the gaming-focused features and goes with a basic set of controllers. The design of bothboards is the same, with a black chipset and M.2 heatsink pairing, as well as a black and grey patterned PCB.

with only the following subtle differences in the specifications.The MSI B560M Pro includes a DisplayPort 1.4 output, while the B560M-A Pro omits this; this is the only difference between both models. 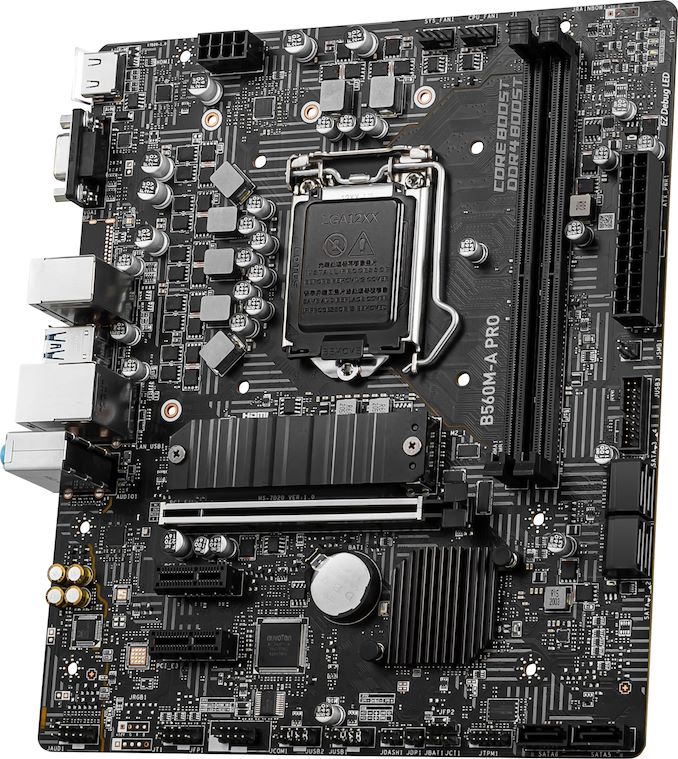 Both models include one full-length PCIe 4.0 x16 slot, with two PCIe 3.0 x1 slots. For storage, there'sone PCIe 4.0 x4 M.2 slot, with six SATA ports including two with straight-angled connectors, and feature support for RAID 0, 1, 5, and 10 arrays. In the top-right hand corner are two memory slots that can accommodate up to 64 GB of DDR4-5200 memory. The power delivery doesn't include a heatsink, and there is a single 8-pin 12 V ATX CPU power input.

The only difference between both models is the MSI B560M Pro includes a DisplayPort 1.4, as well as one HDMI and one D-sub video output. The B560M-A Pro includes both the D-sub and HDMI, but not the DisplayPort. Both models include four USB 3.2 G1 Type-A and two USB 2.0 ports, with a PS/2 combo port and three 3.5 mm audio jacks powered by a Realtek ALC897 HD audio codec. Finishing off the rear panels is a single Realtek RTl8125B 2.5 GbE controller.